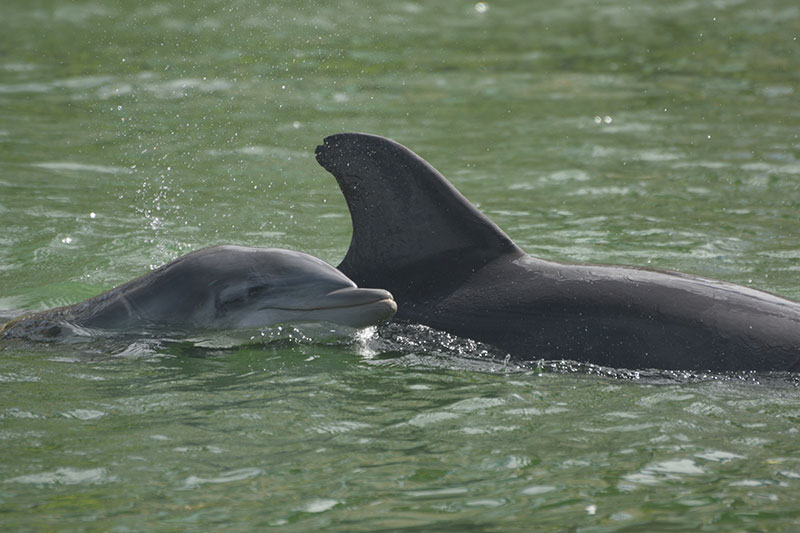 Four months after red tide appeared on the shores of Anna Maria Island, effects of the tiny Karenia brevis continue to wreak havoc on marine life and livelihoods.

The National Oceanic and Atmospheric Administration declared an unusual mortality event for bottlenose dolphins. An initial UME had been declared Aug. 30.

The move was prompted by a die-off of dolphins along the southwest Florida coast, including two juvenile dolphins that washed up at the Kingfish Boat Ramp, 732 Manatee Ave., Holmes Beach.

The weekend of Nov. 24-25, Mote Marine Laboratory collected the dolphins for testing. They were two of four found in the Tampa Bay area.

Kim Amendola, media adviser for the southeast region for the National Oceanic and Atmospheric Administration, informed The Islander Nov. 30 that 42 dolphins had stranded/died since Nov. 21. Those numbers, when added to a tally of dolphin deaths attributed to red tide since the bloom began a year ago, bring the known total of deceased Gulf dolphins to 123.

A third of the dead dolphins were found Nov. 21-30 and scientists were scrambling to decipher why.

“Of the 16 dolphins from this event tested so far, all 16 tested positive for red tide,” Amendola said. “It’s suspected red tide is the cause of the other stranded dolphins as well. However, it may take weeks to get test results back from more animals.”

The job of collection and necropsy has fallen to Mote Marine’s Gretchen Lovewell and her team.

The team has been on the front lines, pulling in deceased dolphins, taking tissue samples and attempting to pinpoint the causes of death.

Between Nov. 21-29, 37 dolphins washed ashore, with 15 of those appearing Nov. 27 alone, the Naples News-Press reported.

Meanwhile, for Manatee County, the National Weather Service issued a four -day beach hazard alert Nov. 26, then extended it through Monday, Dec. 3. Potential red tide respiratory irritation impacts were cited as the reason and the hazard reached inland to Interstate 75.

Also, water samples taken by the Florida Fish and Wildlife Conservation Commission continued to show concentrations of red tide in the area.

The numbers reflected lower levels of red tide as concentrations continued to bounce up and down.

Locals hoped the cold snap Nov. 27-29 would help tamp down the red tide, but those hopes were dashed.

Scientists at the Florida Fish and Wildlife Institute in St. Petersburg said the traditional lore that winter and cold water kill a red tide bloom is not true.

The institute said in October that a drop in the water temperature would have no effect on a red tide bloom.

Snowbirds have begun returning to Anna Maria Island for the winter, and shops and restaurants are filling up once again.

But red tide continued to percolate in the Gulf, and scientists continued to struggle with understanding why.