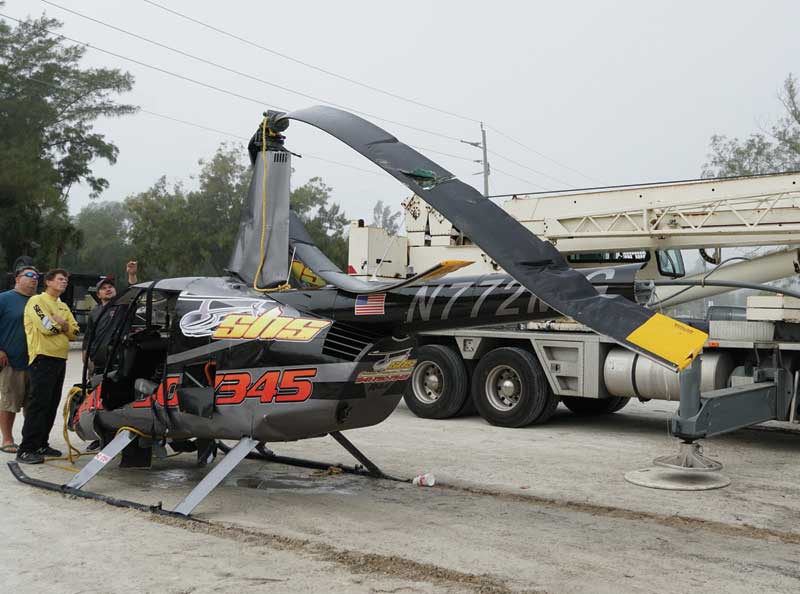 Duke Overstreet of Sea Tow, center, who oversaw recovery Jan. 4 of a helicopter that crashed in the Gulf of Mexico Jan. 2, and two other men note damages to the copter after it was brought earlier in the morning to the Coquina Beach South Boat Ramp. The helicopter was recovered at about midnight Jan. 3 about a mile offshore of Anna Maria. Islander Photo: Kathy Prucnell 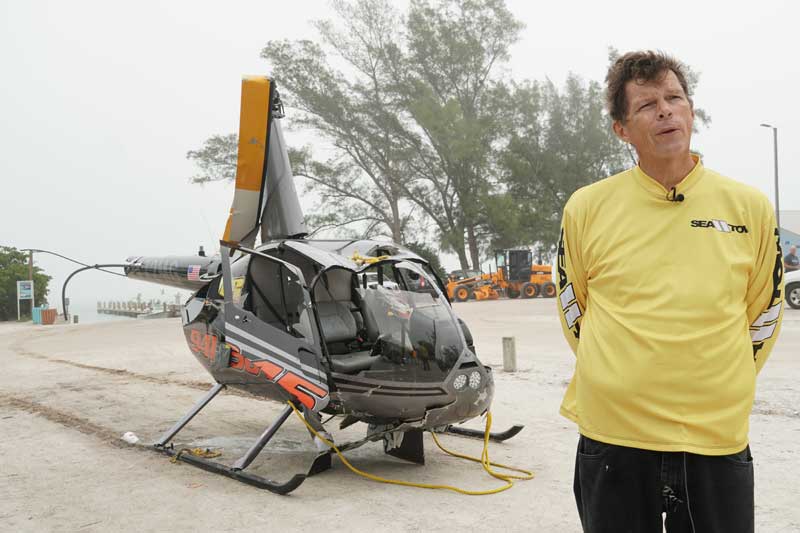 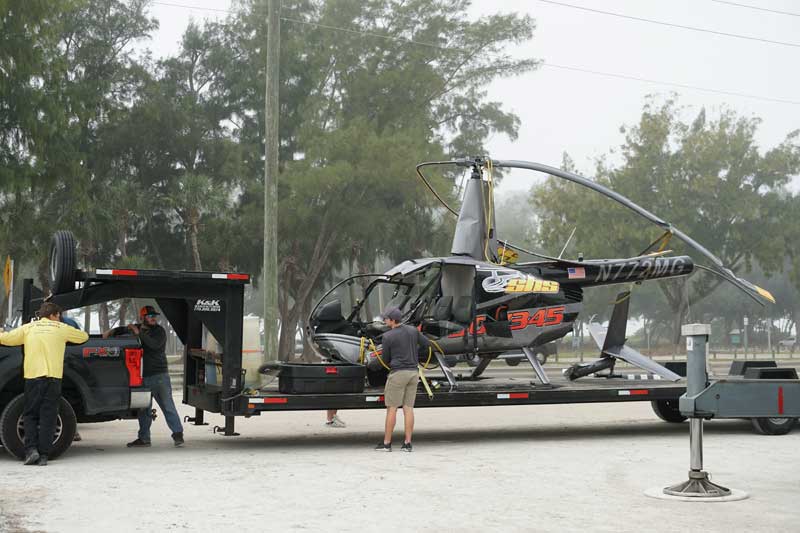 The helicopter that crashed in the Gulf of Mexico Jan. 2 with three people aboard approximately a mile offshore of Anna Maria is readied for transport Jan. 4 at Coquina Beach by Sea Tow Bradenton and Ben’s Crane Service of Bradenton. Islander Photo: Kathy Prucnell

The federal government shutdown is reverberating on Anna Maria Island.

Answers to why Sarasota pilot Stanley Lee crashed Jan. 2 in the Gulf of Mexico about a mile from the Anna Maria shore — sending Lee and photographer Tom McKnight to Blake Medical Center in Bradenton — appear to be delayed due to the shutdown.

As of Jan. 4, Lee was reported in serious condition, improved from a critical status.

McKnight, who spoke to The Islander Jan. 6, was treated and released, said he’s feeling very sore but thankful.

McKnight was shooting video and stills of a boat for a manufacturer’s promotion, when water rushed into the helicopter.

“We were flying close to 50 minutes and had done multiple passes in the bay,” he said.

According to Robert Smith, director of Manatee County Public Safety, the helicopter was flying 10-15 feet above the water level before the crash.

“I really don’t know what happened. We were flying normal and then we were not,” McKnight said, adding he then submerged and realized he was hooked on something.

“Honestly, I thought that was it,” he added, saying he felt no panic.

Somehow he became unhooked, he said, came to the surface and saw the other men who had been in the helicopter also had surfaced.

Lee, McKnight and the third man in the chopper, Peter Bowden, boarded the boat they had been filming.

As a 911 dispatcher was directing the boaters, the U.S. Coast Guard from station Cortez met them with a 29-foot boat and crew.

The Coast Guard crew rendered first aid and escorted the boat to the Coquina Beach South Boat Ramp in Bradenton Beach. From there, a Manatee County EMS ambulance transported Lee and McKnight to

All civil aviation accidents undergo investigations by the National Transportation Safety Board and the Federal Aviation Administration, according to the NTSB website.

However, FAA public affairs officer Gregory Martin wrote in a Jan. 3 email there were no plans to begin an investigation of the helicopter crash.

An auto-email response Jan. 3 from Kathleen Bergen, FAA public affairs officer for the southern region, states, “Due to the lapse in government funding, I am not working.”

A similar message was delivered by an officer with the NTSB who answered the phone, but declined to give his name as a spokesman.

Meanwhile, local officials were fielding questions about the crash.

Manatee County Sheriff’s Office public information officer Randy Warren wrote in Jan. 3-4 emails that the FAA and NTSB were notified but an investigation had not begun, adding the FAA “may or may not follow up.”

Duke Overstreet, owner of Sea Tow Bradenton, said he and a crew, including a diver, found the copter in 25 feet of murky water at about midnight Jan. 3

Found among the retrieved helicopter were a professional video camera, a backpack and wallets.

The crash was first reported at 10:53 a.m. by one of the people in the vessel that was being photographed.The boater told the 911 dispatcher, “We’ve got multiple injuries. We’ve got a guy with his ear torn off. It’s bad. He’s got half an ear cut off and he’s choking blood.”

The dispatcher advised treatment and directed the boater to the boat ramp, remaining on the line until they were met by the Coast Guard vessel.

McKnight, a guitarist with a rock band, The Verge, said he’s not looking at life the same since the crash.

Noting he lost his cellphone and video camera, McKnight said, “None of that matters.”

“That first gulp of air I took is the same air we all breathe,” but, he said, taking a breath again reinforced his belief in peace, love and helping others.

There were some reports that four people were aboard the helicopter when it crashed, but McKnight dispelled that rumor.

“There were three of us” on the chopper, he said. “Maybe the fourth was the angel.”

McKnight added that his band will play for a celebration of life for the crash survivors Friday, Jan. 18, at Stottlemyer’s Smokehouse in Sarasota.