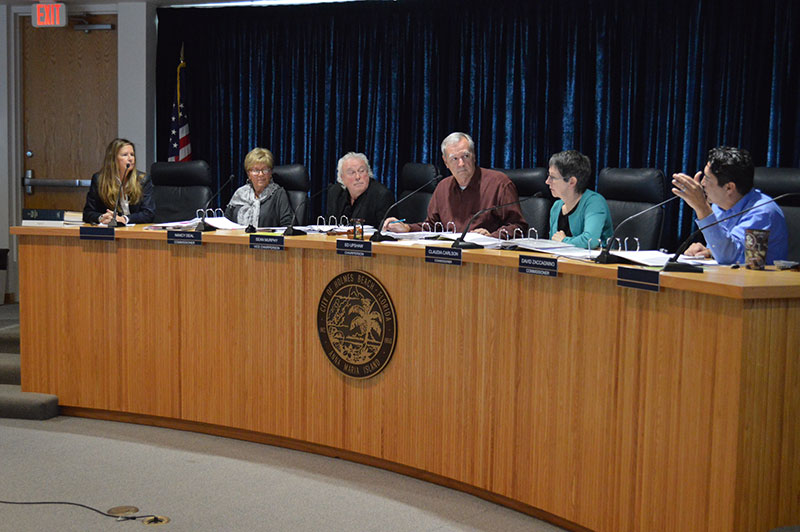 Holmes Beach charter review commissioners are evaluating the charter official’s positions as they relate to the current form of government.

At a Jan. 31 CRC meeting, Mayor Judy Titsworth spoke to the board about job descriptions in the charter and said she is seeking a director of development services — a new position for a new city department — to assume some duties the charter prescribes to the building official.

The charter states the building and public works departments are under the direction of the building official.

“That is virtually impossible today,” according to Titsworth.

She said the task of a building official is to implement Florida building codes and serve as building code administrator, which does not necessarily qualify the official to direct community development, or short-term and long-range plans for roads, mobility and related policies, as is currently called for in the charter.

“We’ve gotten so many complaints from the lack of responsiveness in that department, when you can’t expect a building official to carry that weight,” she said.

“There is real value in these being managed by a qualified director that is a leader, who has vision for the future, with sustainability, clean air and perils of flood,” Titsworth said.

She said there is $92,000 in the 2018-19 budget to pay a supervisor, including the salary for a plans examiner who resigned shortly after she took office and has not been replaced, and funds budgeted for a new permit technician position she chose not to fill.

The position is being advertised.

Titsworth added that while there has been significant discussion about changing the city form of government to include a city manager, no one has addressed the need for development services.

CRC member Nancy Deal asked Titsworth if other cities have such a department, to which the mayor replied, “Yes, most cities do. No matter their size.”

Anna Maria and Bradenton Beach do not have development services departments or heads.

Regarding changes to the existing charter positions, Titsworth said the descriptions, which were expanded in 2014, should be trimmed down.

She said there is too much language that does not belong in the charter and could be constraining for the positions.

City treasurer Lori Hill also told the committee the charter job descriptions are too detailed, which could be problematic.

“It ties our hands,” she said.

Additionally, Titsworth said the human resource analyst should be removed from the charter, as it is not a vital component of the government.

CRC member David Zaccagnino said he appreciates the mayor’s comments, but is looking forward to hearing from staff, because he “wants to make sure this is simple, but that it also has power.”

Charter changes approved by the supermajority of the committee are submitted to the city commission as an ordinance, and the commission votes to provide the ordinance for a citywide vote on the November ballot.

City attorney Patricia Petruff said she would prepare and review the ordinance for the ballot with the Manatee County Supervision of Elections.

The CRC will meet at 1 p.m. Thursday, Feb. 7, at city hall, 5801 Marina Drive, for a teleconference with Florida League of Cities representative, Lynn Tipton.