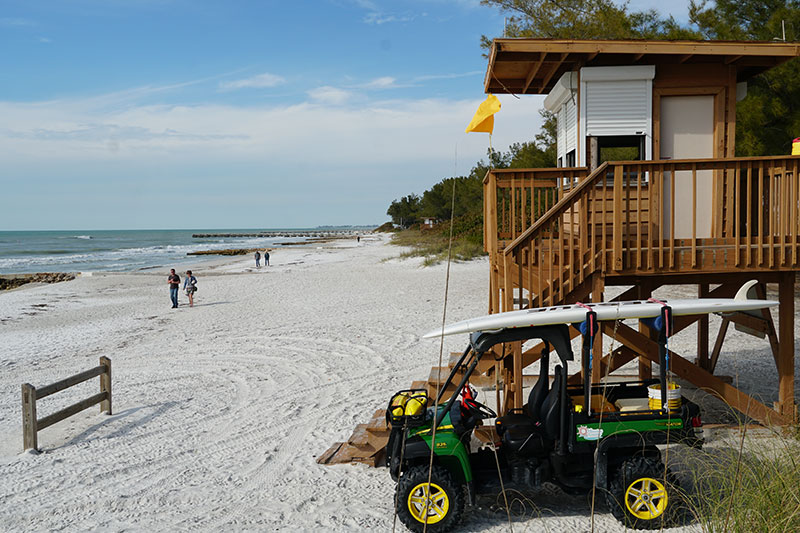 Lifeguard towers line the beach Jan. 31 in Bradenton Beach. A proposal to replace the towers soon will be considered by the Manatee County Commission. Islander Photo: Kathy Prucnell

Lifeguards are better able to scan for trouble from a high perch.

The Manatee County Board of Commissioners is expected to review the contractor’s plans at an upcoming meeting.

Towers will be added at Cortez Beach at the base of the three groins, the pier-like erosion-control structures that jut into the Gulf of Mexico, and old towers will be replaced.

The county’s 2018-19 budget includes $350,000 to add three towers and $750,000 to replace eight towers — six portable towers between Cortez and Coquina beaches, as well as the two permanent towers at Coquina Beach and the Manatee Public Beach in Holmes Beach.

“The current lifeguard stands have baked in the sun near abrasive sand and surf for 20-plus years,” said Joe Westerman, chief of the Manatee County Marine Rescue, who heads the division, including 16 lifeguards and other safety personnel.

According to the county website, the towers, built in the mid-1990s, do not meet Florida wind codes.

The lifeguard tower improvements are among numerous public safety, parks and transportation projects to be paid by the half-cent sales tax hike approved by voters in November 2016.

The voters doubled the county’s portion of the sales tax from a half-cent to 1 percent, resulting in a 7 percent sales tax in Manatee County.

The county estimated the tax would bring in about $30 million annually, with 15 percent allocated for public safety, 71 percent for transportation and 14 percent for parks.

In 2018, about 2.9 million people visited the beaches and the beach patrol responding to 3,617 medical emergencies, 18,551 beach incidents and 77 water rescues, according to Nick Azzara, Manatee County public information officer.

For more information about the sales tax projects, go online to www.mymanatee.org/halfcent/projects.