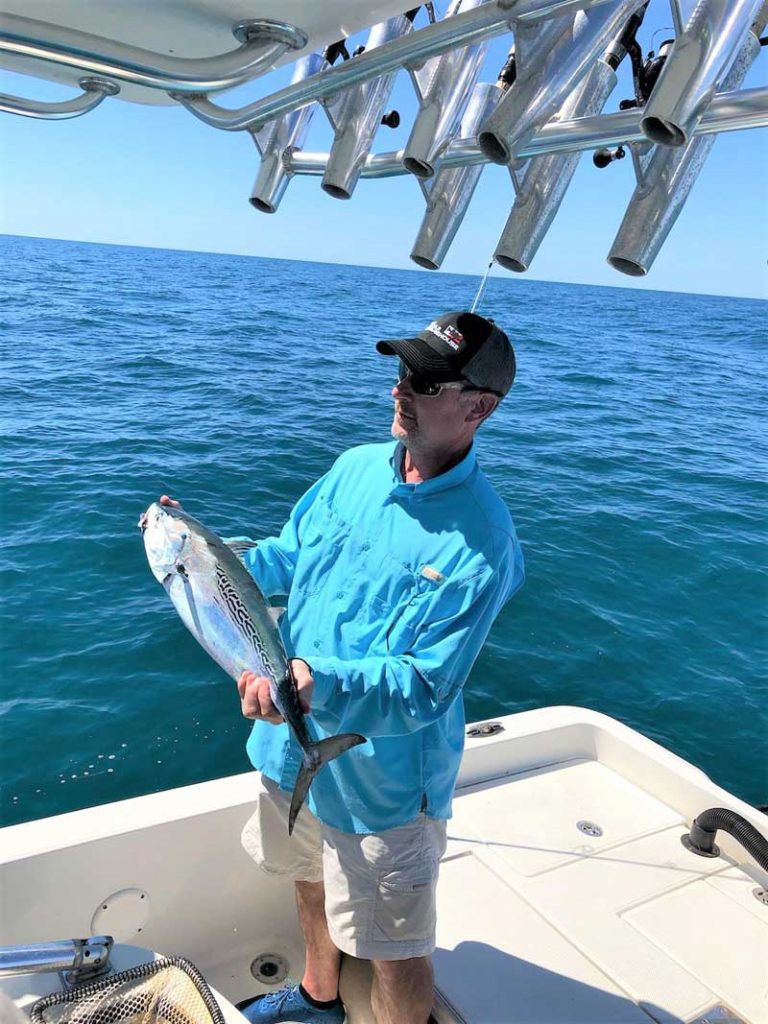 Colby Starrett, visiting from Ohio, shows off his catch — a bonito — caught offshore using white bait on a March 8 charter. Colby was guided to the fish by Capt. Warren Girle.

People fishing around Anna Maria Island will find all kinds weather in March.

Some days we experience hot, humid weather, with no breeze. Other days are springlike with warm sun and cool breezes. And other days are cold, dreary and windy.

So anglers need to adapt to be successful on the water.

Bait is equally important to put fish on the table or to grab a trophy photo.

On warm, clear days, it’s wise to use live shiners as bait. Spotted seatrout, catch-and-release redfish and snook — all on the feed with these conditions— will readily eat a shiner.

On colder, windier days, you might put the cast net away and buy some live shrimp to use as bait. On these days, you might find yourself staying out of the wind and seeking warmer water in canals and around docks. Using shrimp in these areas will attract sheepshead, black drum and catch-and-release redfish. I wouldn’t be surprised if you hook a couple of catch-and-release snook, as well.

On my Southernaire charters, I’m keeping my options open. With a string of beautiful days, I am working the flats for catch-and-release snook. Live shiners free-lined around mangrove shorelines, shallow flats and other staging points are producing some exceptional action on linesiders for sport fishers.

On days when it’s calm and sunny and water temps are in the mid-70s, we are experiencing some of the best catch-and-release snook fishing of the year. Spotted seatrout are receptive in these conditions. Over deep grass areas, I’m finding quite a few slot-size fish, as well as gator trout in the mix.

On the not so favorable weather days, I’m switching tactics and using live shrimp as bait. I’m also changing locations. On days around the cold fronts, water temperatures drop dramatically, having a negative affect on the catch-and-release snook. In layman’s terms, “when it’s too cold, they ain’t gonna bite.” On these days, I’m moving to calmer waters, such as canals and other areas that provide shelter from the wind. These areas are host to sheepshead, black drum and catch-and-release redfish. All three of these species love to eat shrimp and that’s what I’m offering.

No matter what the conditions, there are always fish to be caught. You first need to put a line in the water and find out what’s biting.

On a final note, snook and redfish are still closed in our region. The Florida Fish and Wildlife Conservation Commission will hold a meeting in May to reassess the closure but, for now, both species are catch-and-release. Also, keeper spotted seatrout are limited to the slot of 15-20 inches — no oversize fish.

Capt. Warren Girle is taking anglers to nearshore structure with good results. Using live shrimp as bait is yielding a variety of species, but especially sheepshead. Mixed in with the convict fish are the usual suspects — mangrove snapper, Key West grunts, flounder and juvenile grouper. Another species being found on nearshore structure are black drum, which are typically caught in shallower areas. The inshore bite also is producing action for Girle’s clients around residential docks and canals, where redfish, black drum and an occasional catch-and-release snook are taking their bait.

Jim Malfese at the Rod & Reel Pier says the sheepshead bite is in full swing. Pier fishers using live shrimp as bait are reeling up numerous sheepies in a morning of fishing. While targeting sheepshead, they’re also hooking into flounder and black drum. Pompano are being caught by pier fishers casting out jigs tipped with fresh-cut pieces of shrimp.

Capt. Aaron Lowman is guiding his charters to snook along the mangrove shorelines. With the recent arrival of white bait on the flats, his sport anglers are finding the snook active and feeding. Best results are occurring on the warmer days of the week. On cooler days, Lowman is using live shrimp as bait. Anglers casting shrimp around rocks and docks are producing action on sheepshead, flounder, black drum and catch-and-release redfish. Moving into the Gulf of Mexico, where mangrove snapper, porgies and Key west grunts are in abundance, live shrimp is working well. Tripletail also are taking the bait.

Capt. David White of Anna Maria Charters is taking advantage of the calm days when the wind is light by fishing offshore structure and hard bottom in the Gulf of Mexico, where there’s action on African pompano, mangrove snapper, red grouper and amberjack. For bait, White carries a smorgasbord — live pinfish and shiners, as well as frozen baits, such as sardines and squid. Moving inshore, White is using live shiners to target catch-and-release snook for trophy photos.

Capt. Jason Stock is working wrecks offshore when the seas are calm, producing some exceptional mangrove snapper. Live shiners on a bottom rig are attracting snapper 6-9 pounds. And, in case you didn’t know about mangrove snapper, these are big ones. Also, while on patrol around the wrecks, Stock is putting his anglers to work on large amberjack, as well as a few kingfish. Permit also are making a strong showing on some wrecks.

On windy days, he is working inshore for catch-and-release snook and redfish.

And he’s testing out his new offshore boat. Stay tuned.

In recent years, local authorities, in Anna Maria in particular, have dealt with clashes between beachgoers, crabbers and shore-based shark fishers.

Rule changes include:
• Creation of a mandatory, no-cost, annual shore-based shark fishing permit.
• Those under 16 must meet an educational requirement unless they fish with an adult with a permit.
• No chumming when fishing from the beach for any species.
• Shore fishers must immediately release any prohibited shark species.
• Prohibited shark species must remain in the water when fishing from either shore or vessel.
• Requires use of a device capable of quickly cutting the leader or hook when targeting sharks.
• Observe new definitions for beach, chumming and shore-based shark fisher.