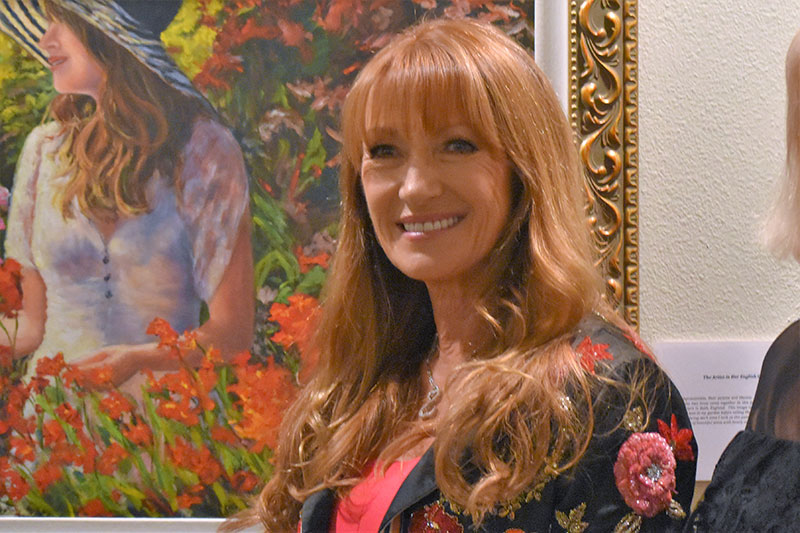 Jane Seymour poses Jan. 18 with her self-portrait at the Studio at Gulf and Pine in Anna Maria. Her appearance at the gallery was paid with tourism tax dollars. Islander File Photo: Sandy Ambrogi

She has celebrity power.

And her draw for Manatee County cost taxpayers a pretty penny.

In January, a three-day visit by Jane Seymour to the Bradenton area included the unveiling of a 7-foot tall “Open Heart Icon” by Seymour at the Bradenton Riverwalk, an invitation-only reception at the Studio at Gulf and Pine in Anna Maria and a lecture at the Manatee Performing Arts Center in Bradenton.

But will the cost of at least $193,981.50 bring a return for the Manatee County Tourist Development Council?

Guests at the Studio art reception clamored for photos with the star.

There was a lot of browsing of the dozens of the prints, oils and statues offered for sale — priced $2,000-$30,000 — at the Studio. However, not one item sold, according to Tina Chiles, who manages the art gallery.

Chiles’ husband, Ed, is a member of the TDC board. He owns the Studio at Gulf and Pine, the Sandbar and Beach House restaurants on Anna Maria Island, and Mar Vista Dockside Restaurant and Pub on Longboat Key.

Earlier that day, Seymour attended an unveiling of the 7-foot-tall icon of her “Open Hearts” jewelry design purchased by the TDC for the Realize Bradenton Art Walk Project. She also spoke Jan. 19 at a ticketed event at the MPAC.

In the talk, “Jane Seymour Art — Up Close and Personal,” she shared her philosophy and her life challenges with the audience. One of her sons, a musician, opened the two-hour show.

The event did not sell out, and the Bradenton Area Convention and Visitors Bureau offered some tickets to locals at no cost to fill the seats, according to an Islander source.

Seymour’s appearance and a series of music concerts held at nonprofit venues were promoted by the BACVB to help businesses and workers overcome the impacts of red tide in 2018.

Much earlier, however, before the outbreak of red tide in Manatee County, on June 18, 2018, Elliott Falcione, executive director of the Bradenton Area Convention and Visitors Bureau, asked the Manatee County Tourist Development Council to amend an agreement with Realize Bradenton to increase funding for art in the urban core $150,000, as a one-time expenditure.

The TDC makes recommendations to the Manatee County Board of Commissioners on how to spend tourism development tax collections.

A 5 percent resort or “tourist tax” is paid on rentals of six months or less in the county, and use of that money is restricted to develop and promote tourism in Manatee County.

The meeting minutes show that Falcione said the success of the Realize Bradenton Art Walk was resonating well in the marketplace and the BACVB wanted to continue its partnership by allowing Realize Bradenton to add more artwork at Riverwalk.

The motion to approve the expense carried unanimously. The minutes include “Exhibit A,” a description of the project, which states the county would reimburse Realize Bradenton in an amount of $182,065, including $150,000 for a permanent mounted sculpture with a first payment of $67,500 after Realize Bradenton executed an agreement with Coral Canyon Publishing and Gallery for a “one-of-a-kind art sculpture” for the park.

Coral Canyon and its director, Susan Nagy-Luks of California, represent Seymour, among others.

Records provided to The Islander by Manatee County show a $602.39 reimbursement to Nagy-Luks for airfare and parking for a May 15-18, 2018, visit to Bradenton — a month before Falcione recommended the Realize art purchase to the TDC.

She added, “The sculpture titled Open Heart Icon, created by Seymour, was a gift to the city of Bradenton public art collection from the Tourist Development Council.”

A summary of the “Open Hearts Sculpture Event with Jayne (sic) Seymour” furnished to The Islander by Manatee County Commissioner Carol Whitmore, shows $193,98150 was spent for the creation and installation of the sculpture at Riverwalk and for bringing Seymour to the area for three days.

Whitmore, a Manatee County commissioner-at-large and chair of the TDC, said March 29, “The city of Bradenton has the original sculpture with none of its kind in Florida.”

Whitmore, who works in downtown Bradenton near Riverfront Park as a nurse, also said, “I see people all the time taking photos next to the sculpture. Her art is well known in the art community all over the globe.”

Also listed: $8,118.35 in airfare, parking, entertainment and lodging expenses for Nagy-Luks for advance preparation and expenses during the January event.

Other costs were $1,047.50 for tent rental for the Jan. 18 unveiling at Riverwalk, $2,500 for shipping the icon to Riverwalk and $198.81 in costs for invitations, email marketing and a Facebook promotion.

The numbers furnished to The Islander do not include costs incurred by the Studio at Gulf and Pine, shipping charges for the displays or catering for the Jan. 18 private reception.

Chiles’ studio paid shipping to and from Anna Maria for nearly 50 items. An agreed upon commission split, which the Studio declined to discuss, became a moot point, since none of Seymour’s art sold.

The one-page summary does not include costs incurred by the Manatee Performing Arts Center, and how much or who else was paid or revenue earned in conjunction with Seymour’s lecture.

According to a U.S. News & World Report article Jan. 21 on the Open Hearts Icon unveiling in Bradenton, Falcione first met Seymour at an art show while on a business trip some 10 months before her appearances in Manatee County. He failed to say April 1 where and when they met in an email exchange.

Falcione was quoted in the U.S. News article as saying, “There is no doubt that showcasing arts and culture and heritage in the marketplace is a big part of our sustainability of visitation.”

It also was reported in the same article that the statue was a gift to the city of Bradenton from the BACVB, the TDC, the Manatee county commission, Fawley Bryant Architecture, Kimley Horn and NDC Construction.

Whitmore advised The Islander by email March 29 she was working to fulfill the public information request initially made to Falcione March 15, regarding expenditures related to Seymour’s visit and the related music concerts.

The BACVB and Whitmore also were asked to furnish contracts for the promoter and entertainers and the expenses related to the music concerts sponsored by the BACVB with funding from the TDC — events that were held at the MPAC and the Center of Anna Maria Island.

Florida’s open records laws provide the opportunity for anyone to request records from public agencies, government entities, and those accepting and spending public funds.

Falcione told The Islander the concert accounting would be made public by Janene Amick of the MPAC, the ticket agent for the concerts, at the Monday, April 15, TDC meeting to be held at the Center of Anna Maria Island in Anna Maria.

Chris Culhane, executive director of the center ,said last week he had only gross sales information for the concerts at the center.

Amick was out of town and could not be reached for comment and an email to Coral Canyon Publishing remained unanswered as of press time.