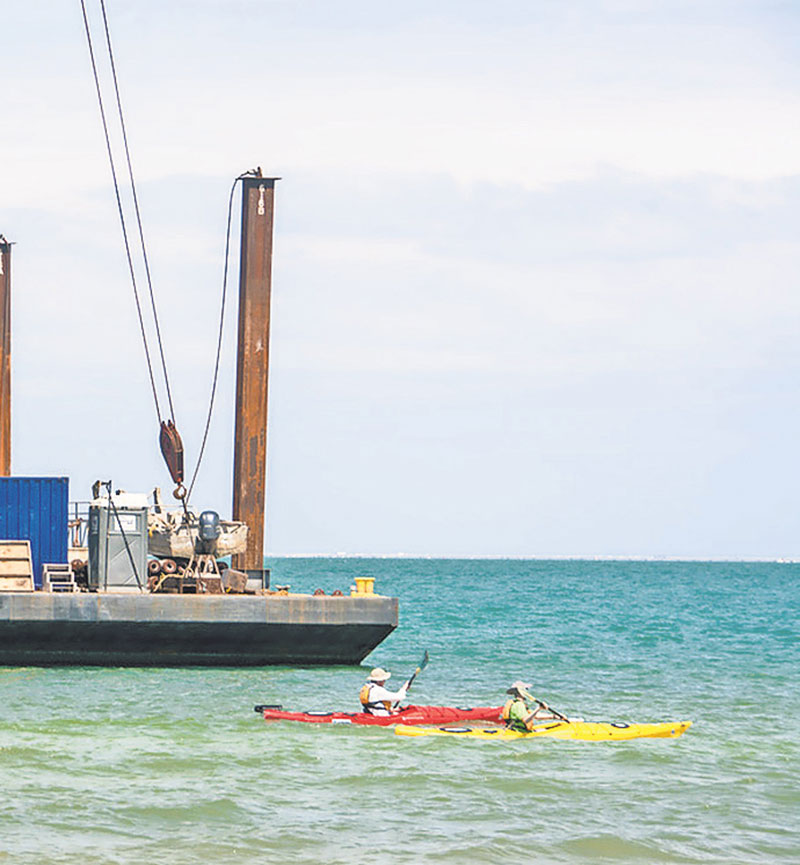 Kayakers make their way in the water near the work site for the new Anna Maria City Pier. Once the historic wooden pier at the east end of Pine Avenue attracted people to fish and dine and also boat in the nearby waters. Now, work to build the new pier draws attention. Islander Photo: Jack Elka

A potential issue may have been identified in the plans for the new Anna Maria City Pier.

Robert Pelc, president of Advantage Trim & Lumber, commented on The Islander’s website that, “There could be a major design flaw with this project!” He claimed the planned ipe planks for the walkway and T-end decking would “cup and twist” due to limited airspace between the wood and the supporting material.

Pelc wrote that Advantage Trim & Lumber is the largest manufacturer of ipe decking in Sarasota, and the problem he identified would be exacerbated if the city neglected to oil the ipe wood, which would seal the wood from the elements.

The city plans to use 3/4-inch by 5 1/2-inch planks, which Pelc wrote would be too long and thin, and to seal the material when installed.

“They should be using 5/4-inch by 6-inch ipe and oiling it to help keep it flat due to the limited airspace between the concrete and the deck surface,” Pelc wrote. “We left messages at the mayor’s office but never heard back as we live locally and would hate to see an improper pier design give ipe decking a bad name.”

Pelc was out of the country and unavailable for an interview before The Islander’s press deadline.

Mayor Dan Murphy told The Islander March 28 he hadn’t received any messages from Pelc, and questioned the validity of Pelc’s claims. He said it sounded like Pelc was critical because the city did not purchase materials from Advantage Trim & Lumber.

Murphy said he would share Pelc’s claims with engineers on the pier project and look into any similar concerns if they are presented to him in-person at city hall.

As of March 28, i+iconSOUTHEAST had driven 135 of 201 total pilings for the pier. Murphy said he expected Icon to finish driving and leveling piles by the end of the month.

He said the city hired divers for a March 30 underwater inspection of the pilings to identify any issues.

Two pilings, both included in the T-end footprint, failed during the driving process, according to Murphy. One was hit and broken by Icon’s work barge and another broke for an undetermined reason.

Murphy said Icon experts were investigating why the second pile broke, but figured it was due either to pile-driving issues or a faulty pile.

Following completion of the walkway pile-driving, Icon will place a concrete deck on the T-end and begin installing wood bents to support decking on the walkway. Murphy said materials would be brought by barge to the site.

The contract requires Icon to complete the walkway and T-end by Aug. 27 or pay a $975 penalty for every workday after the deadline.

Murphy scheduled a meeting with pier tenant Mario Schoenfelder for April 10 to update him on the progress of the project.

The city has not prepared a request for proposals to construct the designed restaurant and bait shop at the T-end.