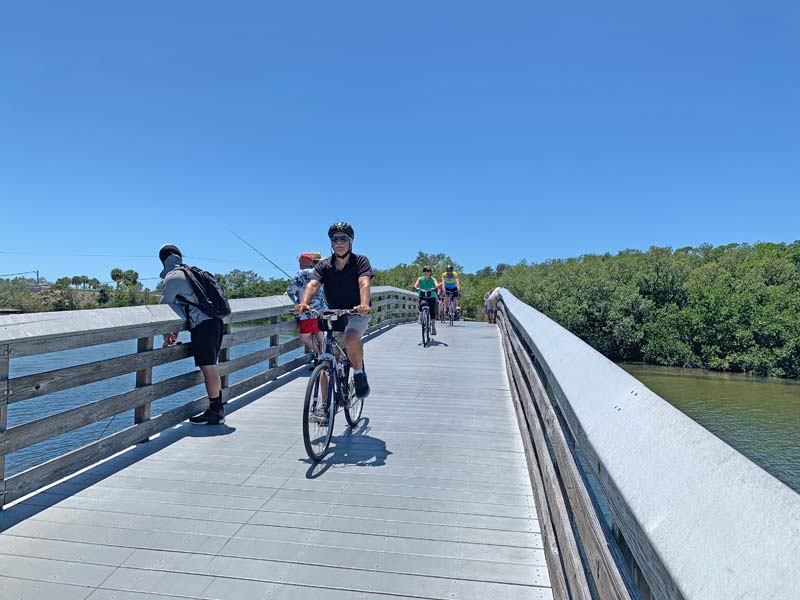 After early storms on Easter weekend, blue skies returned April 21 for bicyclists and fishers on the bridge that links Perico Island and the Robinson Preserve near Manatee Avenue. Islander Photo: Kathy Prucnell

At 12:50 p.m. April 19, first responders rescued a man in his 20s or 30s near Bean Point in the Gulf of Mexico amid intermittent rain showers and gusts 30-40 mph, as reported by Weather Underground at the Sarasota-Bradenton International Airport.

The man was pulled 250 yards out to sea by a rip current where the Gulf meets Tampa Bay, according to Manatee County Sheriff’s Sgt. Mike Jones, who heads the Anna Maria-MCSO substation.

The man’s mother told sheriff’s deputies her son was a good swimmer and familiar with the tides and currents.

Manatee County lifeguard Justin Gaeta swam to the distressed swimmer, shared his rescue board and the pair awaited a West Manatee Fire Rescue boat, which brought them to shore near the Rod & Reel Pier, 875 N. Shore Drive, Anna Maria, according to MCSO and WMFR reports.

Manatee County Emergency Medical Services treated the swimmer at the scene for fatigue.

Another water rescue came two days later in the Gulf near the end of 52nd Street in Holmes Beach with a county lifeguard rendering aid before EMS transported the man to Blake Medical Center in Bradenton.

Two men on personal watercraft were navigating rough waters in the Gulf when one man lost control of his PWC, which then flipped onto him, according to Holmes Beach Police Chief Bill Tokajer.

The Holmes Beach and Anna Maria incidents were among 62 incidents that called in county marine rescue lifeguards March 23-April 22, including 23 water rescues. “Ten on Easter weekend alone,” according to Joe Westerman, chief of the Manatee County Beach Patrol Division.

Mid-April marked the end of spring breaks across the United States, according to STA Travel, a student and youth travel company that tracks spring breaks of college and high school students.

In years past, beachgoers to Coquina Park parked illegally on Gulf Drive South with BBPD ticketing hundreds of scofflaws.

“This year I think the signage really helped,” he said, referring to the county’s electronic signs warning motorists of “limited parking” due to the closed lot at the south end of the beach, where there is an ongoing paving project in the parking lot.

At Coquina Park April 21, BBPD helped reunite a 10-year-old with parents about 50 feet away from the lost child.

Also that day, a disoriented woman wandered a few blocks away from Harvey Memorial Community Church and Bradenton Beach police officers found her.

According to Jones, Diaz and Tokajer, spring break vacationers were well behaved for the most part.

“There were a lot of people on the island. They all followed the rules or they were asked to leave,” Tokajer said.