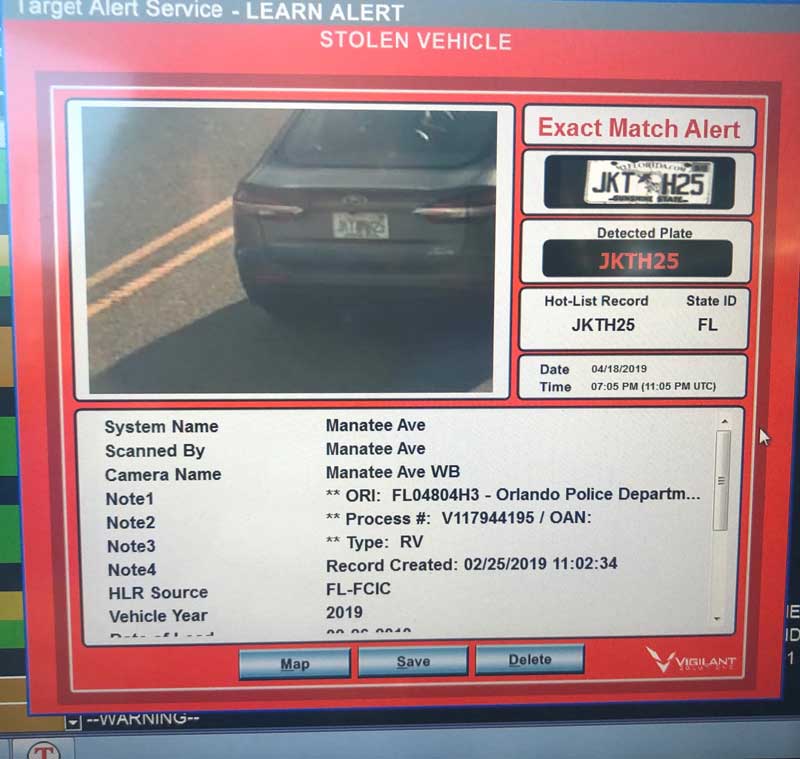 Camera equipment designed to photograph license plates as vehicles drive by in Holmes Beach is up and running.

Holmes Beach Police Chief Bill Tokajer said April 17 that the equipment, attached to utility poles, is “up and running.”

Officers and staff are undergoing training through April 30 and the chief is coordinating the process to share tag information with the Florida Department of Law Enforcement.

The system allows HBPD to track and document license plates of vehicles entering and exiting the city for added security, according to Tokajer.

In January, the city commission authorized the equipment purchase from Vetted Security Solutions of St. Petersburg and another contract for software with Vigilant Solutions of Livermore, California.

This cost includes $525 for five cameras from Vetted, which the city owns.

There are two cameras installed on Manatee Avenue, as well as two on Gulf Drive and one on East Bay Drive.

It appears to be working.

A camera installed on Manatee Avenue alerted the HBPD at 7:05 p.m. of the tag on a stolen vehicle from Orlando heading west into Holmes Beach, then alerted again on the south camera on Gulf Drive as the driver headed into Bradenton Beach.

BBPD located the car and the HBPD assisted in the stop near the Gulf Drive Cafe on Gulf Drive, although no arrest was made.

HBPD Chief Bill Tokajer explained that the car was an unreturned rental and, although it was reported stolen Feb. 25, the company was contacted by phone and allowed the renter to extend the contract.

No arrest was made.

Tokajer said his patrol officer was on another call when the alert came into dispatch, but they put out the stolen car report at about 8 p.m., after it was verified.

By 9 a.m. April 20, the HBPD was alerted of another stolen vehicle entering the city.

“This just goes to show that, like I’ve said before, not everyone who comes to Holmes Beach is a welcome guest,” Holmes Beach Police Chief Bill Tokajer said. “Someone who steals a car is not intending to come to the island to go out to dinner.”