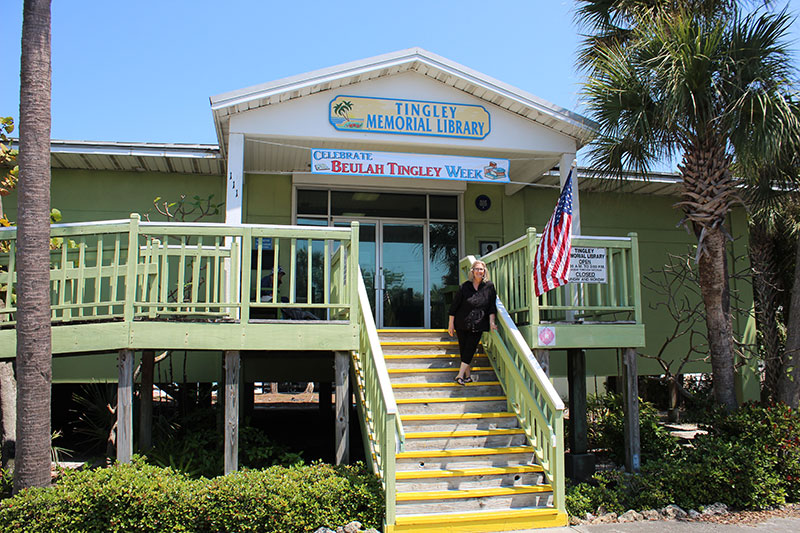 This in-depth article about Beulah Tingley by Joy Courtney and a cover story on the groundbreaking for the library appeared in the Jan. 7, 1993, edition of The Islander (then-named Islander Bystander). The library began in 1959 as the Bradenton Beach Public Library, a private nonprofit organization staffed by volunteers, housed in the Harvey Memorial Community Church on Church Street. The library moved to a storefront on Bridge Street, then a room at city hall and later a beach cottage owned by the city.

Beulah Tingley, the library’s namesake, was a political activist and champion of women’s rights, becoming the first woman to address a Democratic National Convention when she seconded the nomination of Franklin Delano Roosevelt in 1944.

Tingley, who became a Bradenton Beach resident and later a member of the Bradenton Beach Library Board, was an avid reader and noted that the city lacked a dedicated space for a library. She bequeathed more than $600,000 for the construction and operation of a permanent library in the city when she died in 1986.

The current library, at 111 Second St. N., was built and opened in 1994 with money from Tingley’s bequeath, which also funds the library’s sole paid employee.

Library clerk Eveann Adams, the library’s manager, said in an interview April 4 that heading into the library’s 60th year, its leadership isn’t focused on making changes, and instead is intent on maintaining a status quo established by Tingley’s bequeath.

Adams said no events were planned for 2019 to boost library attendance and membership, other than the ongoing “Celebration of Life” week, honoring Tingley with displays of biographical information, photographs, articles and memorabilia.

The library also is offering a BOGO sale — buy one, get one book — as well as 50 cent puzzles and $4 annual library memberships during the celebration, which will end April 13.

Adams has worked at the library since May 2003 and said nothing had changed in the past 16 years.

“People kind of like it the way it is,” she said. “We kind of keep the culture the same, because that’s what people like.”

The library focused on advertising more in the past year, including purchasing space in the Miami Herald and the Anna Maria Island Chamber of Commerce 2019 Visitors Guide, according to Adams.

However, word of mouth seemed to her to be the strongest form of advertisement for the library.

Either way, Adams said 2018 was the most successful year for the library in recent memory.

“I’m not sure really what it’s based on,” she said. “It’s just more people coming. More people spreading the word. Maybe it’s some of the advertising.”

Adams said tourists made up the majority of patrons in the past year, but some island residents are faithful library regulars.

The city is considering changes to city infrastructure, including city hall, the library, police and public works departments. Changes discussed by the mayor and commissioners involve structural improvements, new buildings, selling or repurposing property, including the library and city hall, but no decisions have been made.

“A lot of people, when they thought the library was on the chopping block, they came in all panicked and said, ‘You know, I’ll protest. I’ll do anything you want. I’ll help you move if I have to,’” Adams said. “I just told them not to worry about anything yet.”

She added she wasn’t concerned about the discussions and wanted to assure people that the library would move, but it wouldn’t cease to exist.

Tingley Memorial Library in Bradenton Beach is honoring its benefactor, Beulah Tingley, with a “Celebration of Life” week through April 13.

Also, the library is offering specials — a buy one, get one book sale, sales of puzzles, framed art prints, jewelry and memberships.