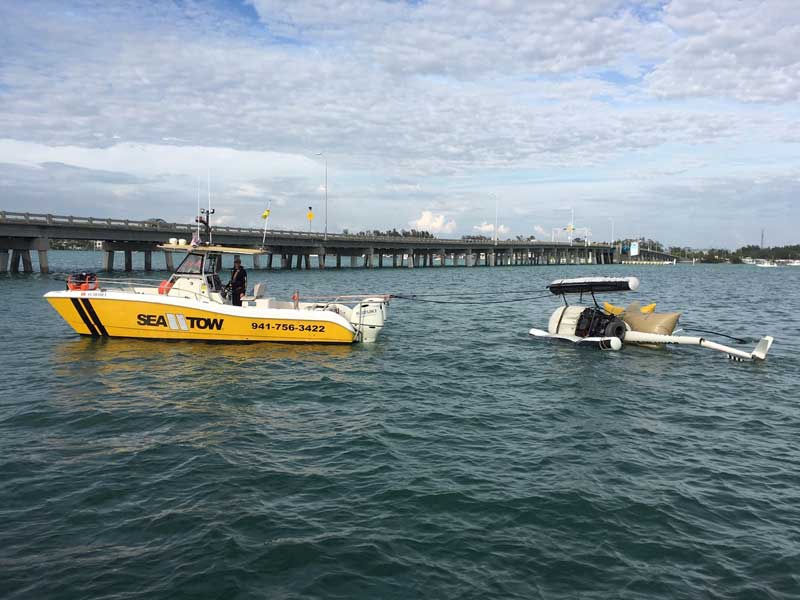 Some islanders are asking, how fast and how low should helicopters fly over island waters?

Rookie pilot Josef Bakker miscalculated a turn and ended up nose down in Sarasota Bay near Coquina Beach early April 13.

Pilot Stan Lee had been flying helicopters for more than 30 years when his copter crashed Jan. 2 into the Gulf of Mexico, about a half mile offshore of Anna Maria Island. The crash sent two of the three men onboard to the hospital.

Lee is still recovering from injuries.

“I’m doing better, but it’s been slow healing,” he told The Islander April 16.

Asked about the cause of his crash, Lee said a bird strike broke the front window and hit him in the head.

A witness reported to the Sarasota Herald-Tribune he saw the tail go up and then the helicopter nose-dived into the water.

Lee was flying a Robinson R44 for a video production company owned by passenger Thomas MacKnight, who was shooting powerboats for a commercial. Peter Bowden was the third man onboard.

MacKnight told the Herald-Tribune after the crash that flying low to film leaves little time to react if something goes wrong.

Lee and MacKnight were taken to Blake Medical Center in Bradenton for treatment. Bowden suffered minor injuries and was not hospitalized.

The April 13 crash involved a smaller helicopter, the Robinson R22. The passenger on that low-flying aircraft was shooting photos of boats and personal water craft.

The advertising on the helicopter read BoatPix.com, which, according to its website, is “one of the world’s largest at taking pictures of boats,” with “most pictures being taken from helicopters.”

Headquartered in West Palm Beach, BoatPix.com has been in business since 1981, according to the website. Calls to headquarters were met with a “no comment.”

What is a safe distance from the water for helicopters?

Lee’s copter was flying 10-15 feet above the water’s surface, when the crash occurred.

“He was low, too low, in my opinion,” witness Shelly Gilbreath told The Islander. She saw the crash from her family’s boat.

Aerial photography is popular with advertising agencies, real estate developers, surveying and other entities. Helicopters often are hired for commercial shoots, charging by the hour.

Helicopter pilots use their own discretion concerning speed and altitude when flying for filming.

Elka says there are no restrictions on a helicopter’s altitude.

“Fixed-wing aircraft can fly no lower than 1,000 feet above populated areas,” Elka told The Islander. “But with helicopters, they can go low. A good pilot would not go low over populated areas. And flying less than 500 feet … over water is always risky.”

He continued, “There’s a saying: Altitude is your friend. When you are low, the slightest thing goes wrong and you’re down.”

The National Transportation Safety Board and the Federal Aviation Administration were contacted about both crashes and an investigation is underway for the April 13 crash.

As for the Jan. 2 incident, the federal agencies had failed to respond to The Islander’s inquiries by press time for the newspaper.