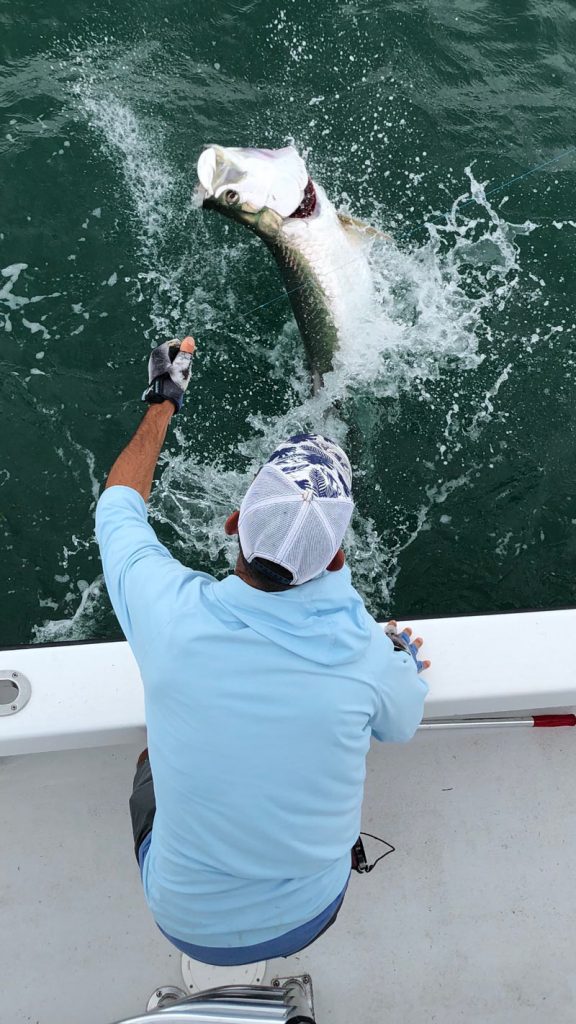 Capt. David White of Anna Maria Charters wrangles a tarpon boat side May 16, preparing for a photo and release. The silver king took a pass crab on the hook.

Fishing the waters surrounding Anna Maria Island is living up to its reputation for excellence.

In 1951, when the first edition of The Islander — a former entity of the same name — rolled off the presses, the way of life on Anna Maria Island was summed up in a line under the newspaper’s nameplate, which proclaimed, “Where Life Is Peaceful … and Fishing Is Good.”

Fishing inshore provides action on a trio of catch-and-release species — snook, redfish and spotted seatrout. The snook bite by far outweighs the hookups on redfish and trout, but that seems to be typical for our area. We just have great snook fishing.

Other species being caught while casting inshore include Spanish mackerel, blacktip sharks and mangrove snapper.

Moving offshore, blackfin tuna are an option if you know the wrecks to fish. Also present around these wrecks are amberjack and kingfish. Permit and numerous bull sharks, as wells as goliath grouper, also are being reported around the wrecks.

Fishing ledges and hard bottom is resulting in mangrove and yellowtail snapper. And, speaking of snapper, don’t forget that American reds open June 1 for federally permitted charter boats and June 11 for recreational anglers.

On my Southernaire charters, I’ve been lurking in the shadows along the mangrove shorelines of Tampa Bay on my hunt for catch-and-release snook.

The bite has been phenomenal with catches of 30-50 fish in a morning. Most of these fish are 22-26 inches, although a few 30-inchers are in the mix. Free-lining live shiners to the fish is proving to be effective, especially during swift-moving tides around mangroves and oyster bars.

I’m also seeing some catch-and-release redfish mixed in with the snook bite. The redfish are more random than consistent, although most fish are in the slot of 18-27 inches.

The catch-and-release spotted seatrout bite is picking up. I’m catching a lot of smaller trout — 12-16 inches — with a few bigger ones mixed in.

Capt. Warren Girle is doing well on nearshore structure. Bottom fishing around the artificial reefs in the Gulf of Mexico is resulting in a mixed bag of mangrove snapper, Key West grunts and flounder for his clients. Juvenile grouper also are being caught on deep bait, while switching to baits cast on the Gulf surface is attracting Spanish mackerel, as well as a few bonito.

Moving inshore, Girle is targeting catch-and-release snook, redfish and spotted seatrout. All three are being caught, although the linesiders are the dominant bite.

Lastly, Girle is patrolling the beaches for tarpon. Although not abundant yet, Girle’s clients are achieving a couple of hookups on the silver kings.

Jim Malfese at the Rod & Reel Pier is seeing Spanish mackerel being caught by pier fishers using artificials — silver spoons, Gotcha plugs and small white jigs. Mixed in are a few jack crevalle and ladyfish. Pier fishers using live shrimp are reeling up an occasional catch-and-release redfish, as well as flounder and pompano for the cooler. Catch-and-release snook are gathering under the pier, which makes them targetable, especially on live bait presentations — large shiners, pinfish and mojarras.

Moving into deeper areas of Tampa Bay, Lowman is finding mackerel over shallow rocks and wrecks, as well as some gag grouper. Also in Tampa Bay, around the Sunshine Skyway Bridge, Lowman is hooking into a few tarpon. Moving out toward the beaches, Lowman is producing action for his anglers on blacktip and spinner sharks, especially when large schools of threadfin herring are present.

Capt. Jason Stock is doing well on blackfin tuna, although he says an abundance of sharks is making it a little challenging to reel in a fish. Bull sharks and blacktips thoroughly enjoy tuna as much as we do, he said, and are eager to strike a fish on the hook.

Stock is encountering kingfish and amberjack along with the tuna. This bite can be referred to as “no rest for the weary,” as any of these fish are well equipped to wear out even the strongest angler, he said.

Lastly, Stock is scouting out the American red snapper bite in preparation for opening day.

Tarpon are beginning to show, which has White excited. He is targeting these fish in Tampa Bay and chasing schools along the Gulf beaches.

Moving offshore, White is gearing up for the June 1 opening of American red snapper season. Also while offshore, White is putting clients on their share of red grouper and a variety of snappers, including mangrove and yellowtail.