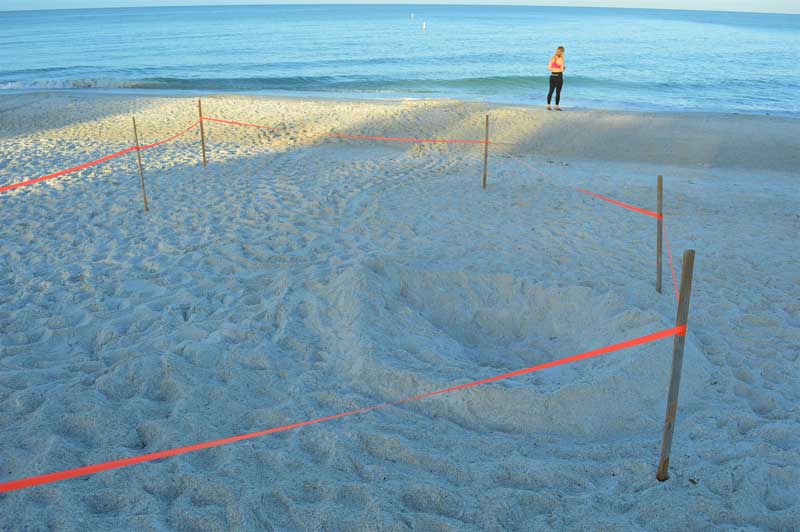 The first loggerhead nest of the 2019 sea turtle nesting season on Anna Maria Island was spotted and marked May 1 at the south end of the Manatee Public Beach in Holmes Beach. The large hole visible on the right was dug and left overnight by beachgoers. More, page 3. Islander Photos: ChrisAnn Silver Esformes 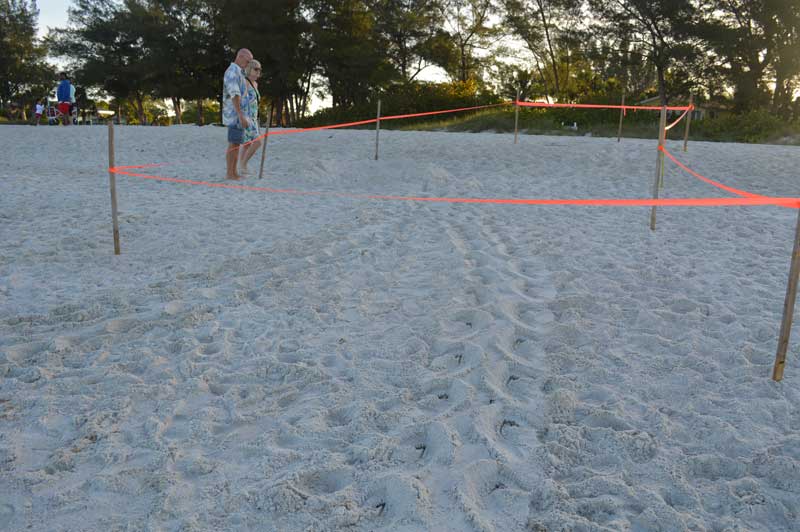 Holmes Beach residents and frequent beachwalkers Todd and Vicki McIntyre look over the tracks and the first loggerhead nest of the 2019 sea turtle nesting season near the picnic area at the south end of the Manatee Public Beach in Holmes Beach. Vicki McIntyre is The Islander office assistant.

Hooray! Tracks on the beach May 1 pointed to a nest.

Alas. There was a huge hole left on the beach — a sure threat to nesting sea turtles.

The first loggerhead nest of 2019 was spotted May 1 at the south end of the Manatee Public Beach in Holmes Beach.

But the nest was found next to a hole in the sand measuring about 5 feet in diameter — large enough to possibly trap or deter the nesting female on its way to lay its eggs or on its return to the Gulf of Mexico.

Sea turtle nesting season officially kicked off May 1, which signals AMITW volunteers hit the beach just after sunrise looking for signs of nesting activity and, later in the season, signs that hatchlings emerged from nests.

Fox said holes in the sand are dangerous to sea turtles and people. She said turtle watch volunteers have been injured on morning walks by stumbling into holes on the beach.

In March 2018, following the spring visitor influx, a hole found on the beach was so large that the beach-cleaning tractor became stuck and had to be towed.

“Holes, especially on Manatee Public Beach, are one of the biggest problems we face on the beach during nesting season,” Fox said. “We understand that people are in vacation-mode and having fun, but they need to remember to take care of our natural resources and fill in holes at the end of the day.”

Holmes Beach code enforcement officer Robin Evangalisto said May 1 that her office patrols the beach during the season, filling in holes and removing beach gear, such as tents, canopies, chairs and rafts left on the beach after sunset.

“People usually just don’t know what they are doing could be harmful,” she said. “Usually they are happy to comply, once we explain.”

In 2018, Anna Maria amended its nuisance ordinance to state that, “Digging a hole in the beach sand so as to create a hazard to other beach users or wildlife is deemed a nuisance and in violation of this code of ordinances.”

Violation of the ordinance in Anna Maria carries a fine of $100.

Some beachfront cities, including Panama City Beach, have ordinances banning metal tools more than 14 inches long on the beach.

Violators in Panama City Beach receive a verbal warning and then a $25 fine.

None of the three island municipalities have regulations prohibiting tools on the beach, but Fox said she plans to approach the Anna Maria, Bradenton Beach and Holmes Beach commissions to see if they would consider adopting such an ordinance.

“Large industrial shovels should be treated like alcohol or any other problematic elements that don’t belong on the beach,” Fox said. “If it takes an ordinance to fix this, then that might be the next step.”