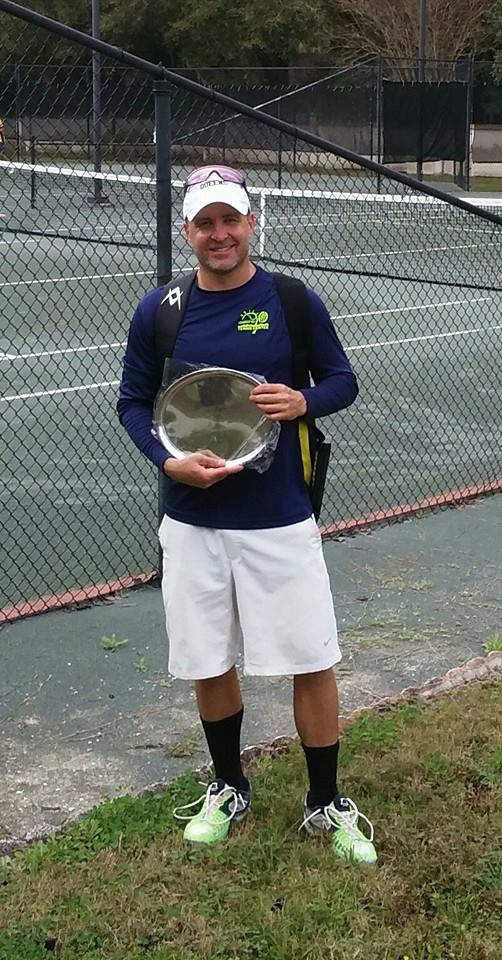 Islander wins tournament Mark Malinowski of Bradenton Beach wins the top level 5.5 Division Tournament of the Bradenton/Sarasota region. The tournament was May 5 at University Park Country Club, where Malinowski defeated Sarasota resident Thiago Domingues in the final. Malinowski credited practice with local players for getting him fine-tuned for the final. “I am lucky to hit once a week with the Manatee High School tennis teams and also once a week with Yury Bettoni, who was the hitting partner for Roger Federer as a teenager in Switzerland, they were excellent preparation,” said Malinowski. The athlete and author of eight tennis books, trains regularly at the public courts in Holmes Beach. Islander Courtesy Photo

The regular season of the youth soccer league at the Center of Anna Maria Island has concluded and the matchups are set for the playoff games.

The top seeds will enter the playoffs with confidence based off their regular season success, the rest of the teams set out anew.

Lancaster Design earned top seed and the accompanying bye into the finals of the 11-15 division on a 4-3-1 record. CABB Cleaning earned second seed with a 4-4 record, just ahead of 3-4-1 Lazy Turtle.

CABB will take on Lazy Turtle in semifinal action at 7:30 p.m. Monday, May 13. The winner of the Monday match will kick off against Lancaster Design for the title at 7:30 p.m. Wednesday, May 15.

Action last week in the 11-15 division got started May 7 when Lazy Turtle earned a 4-0 victory over CABB Cleaning behind two goals and an assist from Thomas Philpott and a pair of goals from Jackson Pakbaz and Max Higgins. Victor Albrecht came through with 13 saves for Lazy Turtle in the victory.

Evan Talucci made eight saves to lead CABB Cleaning in the loss.

The second match of the night saw Lancaster Design earn a 3-0 victory over CABB Cleaning behind two goals and an assist from Frank Coleman and a goal from Caden Quimby. Mikey Coleman came through with 10 saves in goal to help preserve the victory.

Talucci was strong in net for CABB Cleaning, finishing with 10 saves in the loss.

Action in the 11-15 division continued May 8 with an upset victory for Lazy Turtle, scoring 3-2 over Lancaster Design behind a pair of goals from Pakbaz. Higgins added a goal while Albrecht came through with 11 saves in the victory.

The late match saw CABB Cleaning bounce back to earn a 4-1 victory over Lazy Turtle behind two goals from Connor Samblis and a goal each from Fox Dalton and JM Feeney. Talucci again helped preserve the win with eight saves.

Pakbaz scored the lone goal for Lazy Turtle, which received 14 saves from Albrecht in the loss.

The 8-10 division playoff matchups are set as well, with 4-1-1 Beach House Real Estate earning the top seed, just ahead of second place Freckled Fin at 3-1-2. Ace Hardware was just behind them in third with a 3-2-1 record, while Ugly Grouper holds down the cellar with an 0-6 mark.

Johnny Monetti and a second hat trick from Jack McCarthy. Mason Moss chipped in with a goal, while Jack Zaccagnino made nine saves in the victory.

Alexander Teich and Clancy Cusack combined for nine saves to lead Ugly Grouper in the loss.

The action resumed May 8 with Beach House Real Estate earning a 2-0 victory over Freckled fin behind a goal each from Dennis Gallagher and Julia Baugher, while Magness Rollins made six saves in the victory.

Ace Hardware finished the regular season on a high note with a 2-1 victory over Ugly Grouper behind a goal each from Mason Moss and Johnny Monetti. Moss combined with Jack Zaccagnino for seven saves.

Sterling Holiday notched the lone goal for Ugly Grouper, which received 11 saves from Cusack and Teich in the loss.

The adult soccer league at the center completed it’s fourth week of action with the seven teams within striking distance of the top spot.

Gulfview Windows and Doors leads the way with a 3-0 record, closely followed by Blalock Walters at 2-0-1 while Jiffy Lube, Duncan Real Estate and Ross Built are bunched together with 2-1 records. Flynn Law holds down the sixth spot in the standings, while 1-1-1 Sato Real Estate is alone in seventh place. Solid Rock Construction follows at 1-3, while Moss Builders and Beach House Real Estate are tied for last with 0-3 records.

Action May 9 kicked off with Sato earning a 7-5 victory over Jiffy Lube behind a hat trick from the ageless Lyn Clarke. Murap Akay also had a strong game, finishing with two goals and three assists, while Sumiko Chipman and Josh Sato chipped in with a goal each. Zachary Lieb added an assist, while Jason Sato finished with nine saves in the victory.

Daniel Anderson had a goal and an assist to lead Jiffy Lube, which also received a goal each from Anil Akbulut, Ricky Anderson, Nicholas Bolli and Stetson Mathews. Eliza Faillace added an assist while Robb Marshall made eight saves in the loss.

Duncan outscored Beach House 6-3 in the second game behind five goals from Joey Hutchinson. Clancy Vaughan added a goal and Darrin Wash had an assist to round out the Duncan offense, while the defense was led by Trey Horne with 11 saves in the win.

Adam Bujarski, Joe Savino and Kris Yavalar each scored a goal to lead Beach House, which also received nine saves from David Greene and Cameron Maramenides in the loss.

The third match of the evening saw Ross Built edge Moss Builders 4-3 behind a strong performance from Connor Bystrom, who scored two goals on offense and made four saves between the pipes. Vince Circharo added a goal and an assist for Ross, which also received a goal from Greg Ross and six saves from John Hagerty in the victory.

Damir Glavan had a goal and an assist while Diego Felipe and Amy Ivin each scored goals to lead Moss, which got 10 saves from Scott Bear in the loss.

Drew Jacobsen and Yuri Pereira led Solid Rock with a goal each, while Zachary Long made 14 saves in the loss.

Summer golf is underway at Key Royale Club, as many members have departed for their northern dwellings, meaning matches have fewer players.

The men got out May 6 for a nine-hole modified-Stableford system match. Bill MacMillan, Larry Pippel, Steve Pfeil and Earl Ritchie all carded plus-4s for a four-way tie for first place. Not sure who picked up the tab for the post-match beverages in the clubhouse.

MacMillan was part of the winning team with plus-3, along with Brian Comer, Scott Hill and Gary Razze.

The women played a nine-hole individual-low-net match in two flights May 7. Connie Livanos fired a 4-under-par 28 to edge Pam Lowry by one stroke in Flight A. Sharon Tarras was alone in third with a 2-under-par 30.

Terry Westby carded a 4-under-par 28 to grab first place in Flight B. Roxanne Koche was alone in second place with a 2-under-par 30, while Ellen Boin, Laurie

Two teams advanced to the knockout stage and battled for the day’s bragging rights during May 8 horseshoe action at the Anna Maria City Hall horseshoe pits.

The championship match saw Norm Good walk his way to a 15-5 lead, but the team of Rod Bussey and Neil Hennessey rallied for a 21-18 victory and the claim to the day’s title, Bussey’s third straight victory.