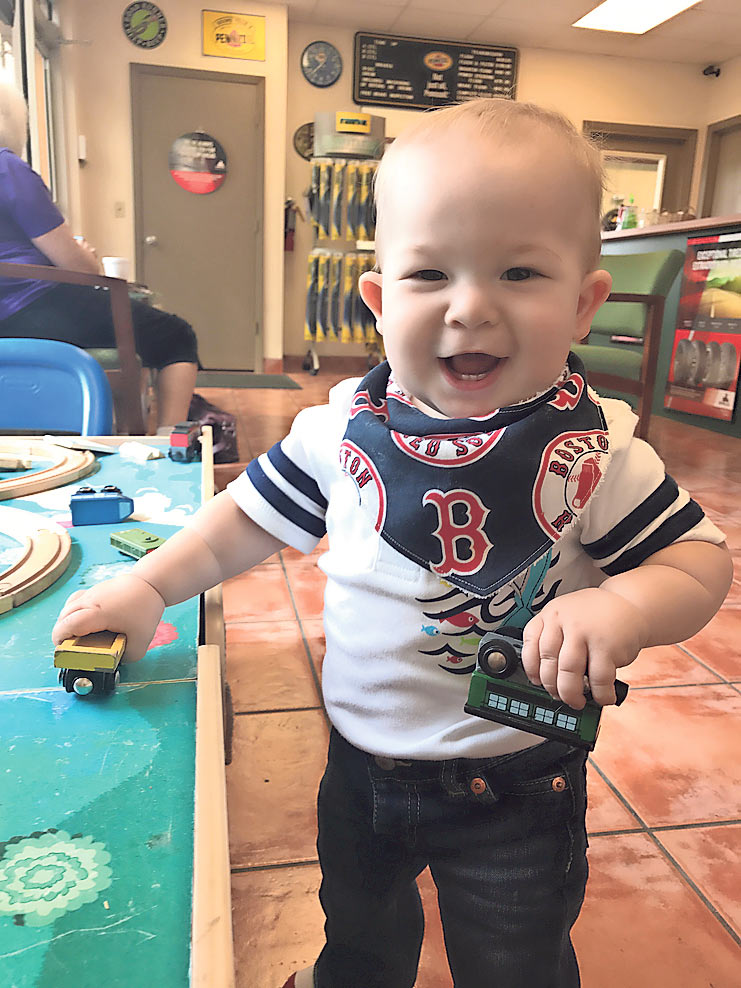 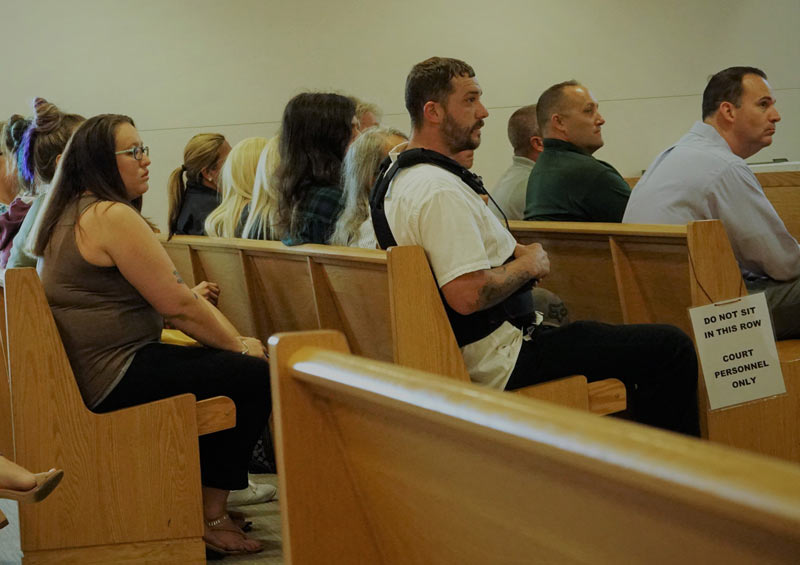 Friends and family of Luca Sholey, including his mom, Melissa Wolfe, and dad, Eric Sholey, await the sentencing of David Vickers May 20 in the gallery of a Manatee County courtroom. Vickers killed their son. Islander Photos: Kathy Prucnell 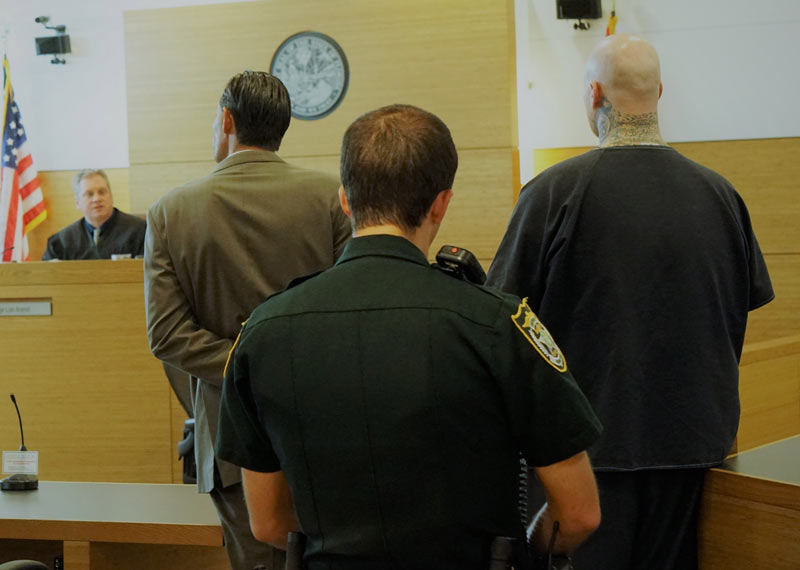 Represented by attorney Joe Campoli and guarded by a Manatee County sheriff’s deputy, David Vickers pleads no contest May 20 to two counts of dealing in stolen property and two counts of pawn fraud as a result of thefts from Luca Sholey’s mother.

Claps and sounds of relief erupted in a Manatee County courtroom when friends and family heard the man who killed a 17-month-old Holmes Beach toddler would spend the rest of his life in prison.

In April, a jury convicted Vickers for the second-degree murder and neglect of Luca Sholey after a five-day trial.

At a May 20 hearing, 12th Circuit Judge Lon Arend sentenced David Vickers, 33, to life in the Florida Department of Corrections without the possibility of parole.

The judge also meted out a 15-year sentence to Vickers for neglect of a child with great bodily harm.

Immediately before the sentencing, Vickers pleaded no contest to two counts of dealing in stolen property and two counts of pawn fraud for stealing and pawning items belonging to the child’s mother, Melissa Wolfe. On these four counts, the judge sentenced Vickers for time served.

Vickers served 586 days in jail since August 2017, when Holmes Beach police arrested him for marijuana possession and a revoked license.

Vickers testified he took fentanyl, fell asleep and woke up on top of the child several minutes later.

Other testimony indicated injuries to Luca’s chest and head, as well as numerous broken ribs, resulted from child neglect and abuse and pointed to Vickers as the person who inflicted the suffering.

At the time, Vickers was living with Wolfe at her father’s apartment in Holmes Beach. Vickers babysat Luca and his sister while Wolfe worked to support the family and Vickers.

Testimony at the sentencing came from Wolfe, Luca’s father Eric Sholey and other family members. All expressed grief and some of their words lapsed into tears and cries.

“Every day I wake up without my son. I want him to know that every day, what he did,” Eric Sholey said, directing his comments at Vickers.

Luca’s aunt, Nicole Sholey, said Luca was “lovable, happy and always smiling” and described how she ached for her brother, Eric Sholey.

Fidele Wolfe, the toddler’s grandmother, testified she believes the stress of Luca’s death brought on her sister’s cancer.

Her partner, Andrew Thomas, expressed his sadness but added a positive note. “Luca’s death has given us togetherness we’re lucky to have,” Thomas said, referring to the Wolfe and Sholey families.

Eric Sholey’s mom and Luca’s paternal grandmother, Mary DeyArmin, told the court between tears that Luca would give big hugs and always smiled.

“And why, why, why. That’s all I want to know. How anyone can kill an innocent 17-month-old baby,” she said. “If you can’t deal with it, you call somebody else,” she added.

Melissa Wolfe told of how Luca’s death impacted her and her family. “Every single day I wake up and it still seems like it happened yesterday,” she said.

She expressed disbelief about how Vickers could be “so cold” at the hospital knowing “he was the reason Luca wasn’t breathing.”

As of May 22, Vickers was in the Manatee County jail, awaiting transport to a state correctional facility.

After the sentencing, his attorney Joe Campoli said the judge had “no option” but to hand down the life sentence, referring to the state law that requires judges to impose a maximum sentence for felons who commit certain crimes within three years of prison release.

Campoli said the regional public defender automatically appeals life sentences, which will take about two years to go through the court system. “It was a really hard case,” Campoli said as he left the courtroom.

Vickers also was assessed $2,331.50 in costs and fines, including $1,309 in restitution to the Florida Crime Victims’ Compensation Trust Fund.

One thought on “Toddler’s killer sentenced to life in prison”