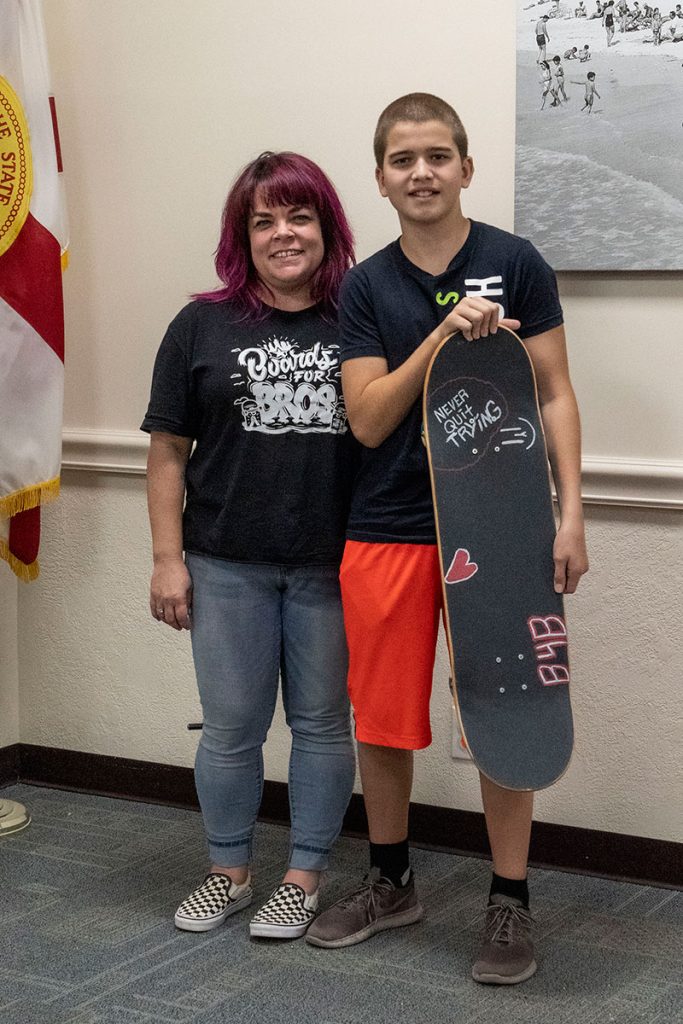 Checking out Boards for Bros at the Island Library Michelle Box, left, gives Nate Southgate, 13, his first skateboard for attending her presentation June 19 at the Island Library in Holmes Beach. At the library’s invitation, Box introduced Board for Bros, a nonprofit skateboarding organization based in Tampa. Box talked with five people who attended her program. Islander Photo: Cory Cole

Early round adult soccer playoff action at the Center of Anna Maria Island is now in the books, but not without some surprises.

In all but one of the matches played June 20, the lower seed prevailed.

The action got started with top-seed Gulfview Windows and Doors taking on seventh seed Sato Real Estate. Gulfview avoided the upset bug and prevailed by a 3-1 score thanks to two goals from Ashley Friszman and a goal from Aaron Parkin. Goalie Jordan Demers made 10 saves to help preserve the victory.

Steve Wertovitch notched the lone goal in the loss for Sato, which received nine saves from Jason Sato.

The upsets began with No. 9 seed Beach House Real Estate eliminating No. 2 seed Ross Built behind a hat trick from Adam Bujarski. Nick Bouchard added a goal and Cliff Powell made nine saves in the victory.

Connor Bystrom and Vince Circharo scored a goal each and John Hagerty made seven saves to lead Ross Built in the loss.

No. 6 seed Flynn Law joined the upset brigade, defeating No. 3 Duncan Real Estate by a 7-5 score. Kevin Roman scored five goals to lead Flynn, which also received a goal and an assist from Tyler Robinson and a goal from Josh Bernet. Lexi Sato added an assist and Mark Rudacille came through with 12 saves in the victory.

Joey Hutchinson’s four goals paced Duncan, which also received a goal from Hunter Parrish and eight saves from Trey Horne in the loss.

The last match of the night saw No. 5 Jiffy Lube and No. 4 Blalock Walters battle to a 3-3 tie, requiring a penalty-kick shootout to determine a winner.

Blalock Walters went first and Matt Plummer failed to score, while Omar Polar converted his spot shot for a 1-0 Jiffy lead. Greg DeMeuse and Matt Skaggs both converted for Blalock Walters, but Emily Taylor and Ricky Anderson were both successful giving Jiffy Lube a 3-2 lead.

Stephen Perry failed on his attempt for Blalock Walters, giving Daniel Anderson a chance to end the game — which he did.

Anderson led the way for Jiffy Lube during regulation play with two goals and Polar added one. Robb Marshall made 10 saves to help preserve the tie.

DeMeuse scored two goals and Plummer added one to lead Blalock Walters, which received 11 saves from Scott Rudacille in the tie.

Action in the June 19 games kicked off with No. 9 Beach House Real Estate taking on No. 8 Solid Rock Construction. Beach House rolled to a 6-2 victory behind three goals from Katie Christenson and two goals and an assist from Adam Bujarski. Kris Yavalar added a goal and Cliff Powell came through with eight saves in the victory.

Steve Oelfke and Eric Pullen scored a goal each, while Ben Sato made nine saves in the loss.

The second playoff game saw Moss Builders and Sato Real Estate battle to a 3-3 tie. Moss received two goals from Jake Parsons and a goal from Nate Talucci in the tie, while Murat Akay notched a hat trick to lead Sato’s offense.

Amy Ivin and Parsons converted their kicks in the loss.

Championship Thursday kicks off at 6 p.m. June 27 with Gulfview Windows and Doors taking on Jiffy Lube in the first semifinal match, followed by Flynn Law versus Beach House Real Estate in the second semifinal at 7 p.m.

The championship match follows at 8:30 p.m.

Golf action at the Key Royale Club was limited to the men’s modified-Stableford system match June 17. Gary Alvord grabbed first place with a plus-6, well ahead of second-place finishers Dave Richardson and Bill Lowman, who carded matching plus-2s.

Two teams emerged from pool play during June 19 horseshoe action at the Anna Maria City Hall horseshoe pits and battled for the day’s supremacy. Dom Livedoti and Bob Heiger jumped out to an early lead and held on for a 22-13 victory over Mason King and Sam Samuels to earn the day’s bragging rights.

Two teams also advanced to the knockout stage during June 22 action as well. In back-and-forth play, eventually, Jerry Disbrow and Hank Huyghe pulled away for a 21-14 victory over Steve Doyle to win the day’s proceedings.