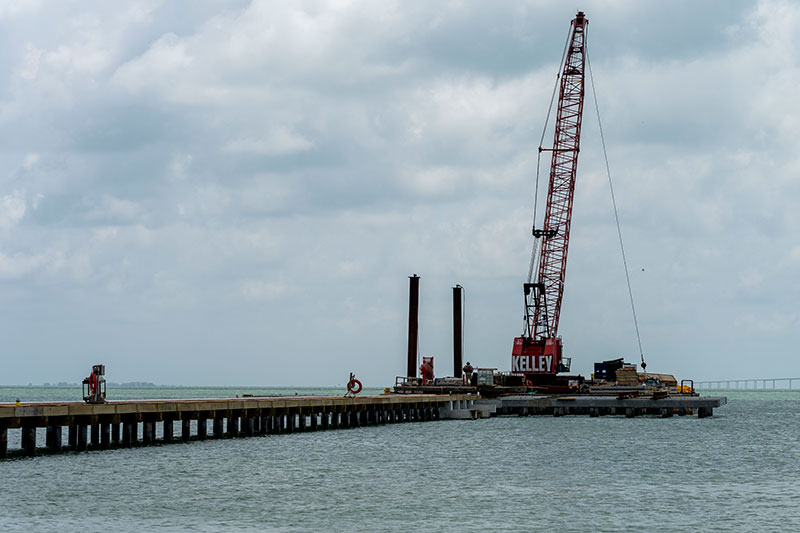 Neither rain nor wind kept i+iconSOUTHEAST from its construction work the week of June 10 at the Anna Maria City Pier.

After placing the concrete and the electrical system, i+icon will begin work on the wood deck to top the T-end and the walkway.

Murphy said the new pier’s lighting will be in compliance with today’s sea turtle lighting regulations.

“It is going to have turtle-friendly lighting,” Murphy said.

He said the electrical work is the only open issue before i+icon can start installing the Ipe decking. The electrical just needs to be in place before the decking goes down, he said.

Murphy said i+icon would start installing the decking by July 15.

As for the restaurant and bait shop, Murphy said he hopes to see the contractor begin work as soon as possible.

He said Frank Agnelli, of Mason Martin, the contractor chosen to build out the amenities on the T-end, has been taking part in pier meetings and helping plan how his materials will be transported to the pier.

Murphy said he has been in contact with Mario Schoenfelder, the current leaseholder for the restaurant, and is negotiating an offer for Schoenfelder to continue operating at the pier.

Murphy also said the plan to build a fence with the engraved planks from the old pier is still on this year’s books. He told commissioners at their June 13 meeting, construction of a prototype of the fence would get underway within the next four to five weeks at City Pier Park.

The new pier is replacing the old wooden pier destroyed by Hurricane Irma in September 2017. The new pier is expected to cost $5.5 million, including demolition and construction expenses. The original pier was built in 1911 and supported tourism — steamships and ferries arriving from Tampa with day visitors.

To date, for funding, the city has received $750,000 in state historical grants. Also, FEMA paid approximately $1.08 million for hurricane damages. The Manatee County Tourist Development Council budgeted $1.5 million for construction. Another $333,000 was committed by Manatee County, and $10,000 was raised through private GoFundMe donations for the pier. The city also sought $285,000 in the 2019-20 state budget, which has yet to be signed by the governor.