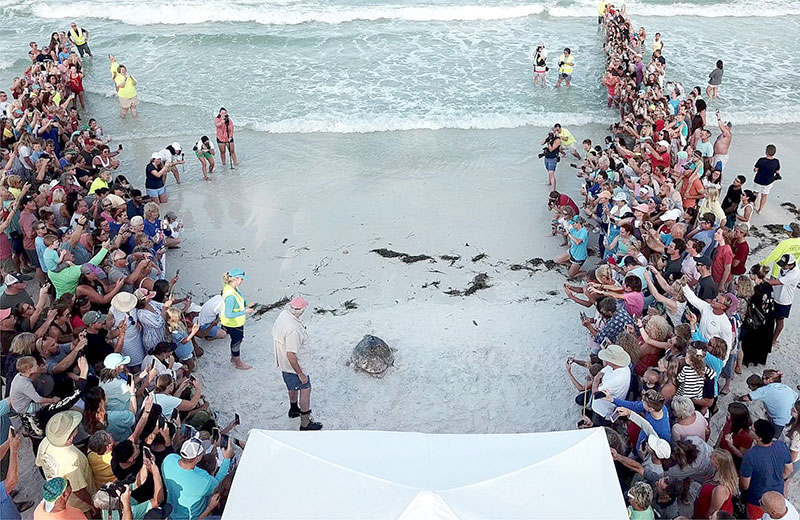 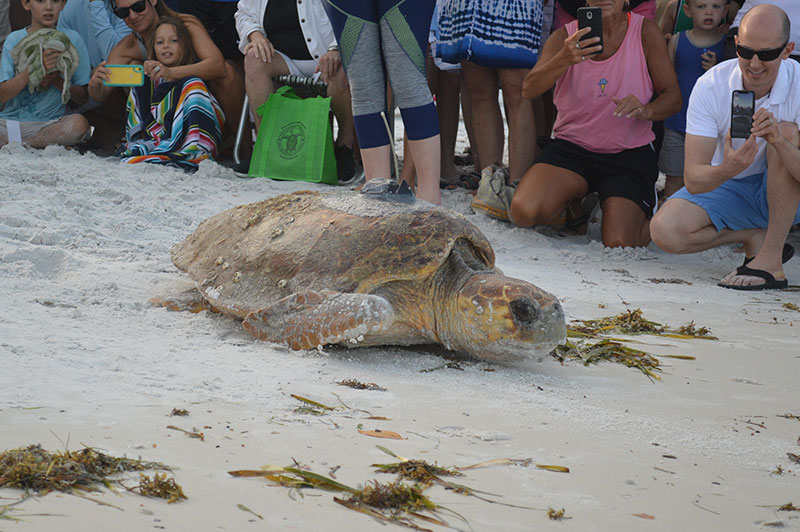 With a tracking device affixed to its carapace, a loggerhead sea turtle — named Bortie Too for sponsor Bortell’s Lounge in Anna Maria — makes its way June 21 back to the Gulf of Mexico. Islander Photos: ChrisAnn Silver Esformes

One sea turtle that nested overnight on Anna Maria Island got a lot more than expected during its trip ashore.

Bortie Too, a female loggerhead, was tagged and released June 21 as part of the 12th Annual Sea Turtle Conservancy’s Tour de Turtles, a sea turtle marathon that officially starts Aug. 1.

AMITW partnered with the conservancy to tag and release the female sea turtle, which cost $5,000. Sponsors included Waterline Marina Resort and Beach Club in Holmes Beach and Bortell’s Lounge in Anna Maria. Bortell’s owner Steve Rose funded the tag and dedicated the loggerhead’s nest to his father, Jack Rose, who died June 14.

Teams of turtle watch volunteers scoured the island shore late June 20 looking for a turtle to tag and release, before volunteer Karen Norton and AMITW intern Emma Bouchard spotted the loggerhead on the beach near Eighth Street South in Bradenton Beach.

After it nested, conservancy staff placed the turtle in an enclosure and held it for the morning release.

Dan Evans, senior research biologist for the STC, with help from volunteers, prepared the turtle’s carapace for the tag by filing off barnacles. He attached the device with epoxy.

Once the device was affixed, about 150 people watched from the shore as Bortie Too crawled to the Gulf of Mexico.

According to Evans, the tracking device doesn’t bother the turtle and eventually will fall off.

Evans said June 21 that the tag used for this year’s race is sturdier than previous years, with less of a chance of malfunction.

“It’s a little bit more streamlined, the antenna is protected a little bit better and it’s somewhat more programmable,” he said. “So we are actually better able to control the variables and the data it’s collecting.”

STC researchers use satellite telemetry to track the turtles. Every time Bortie Too lifts its head above water, the antenna on the tracker sends a signal, letting the scientists — and visitors to the Tour de Turtles website, tourdeturtles.org — know where the turtle is located.

During the lead up to the Aug. 1 start and during the tour, Bortie Too can be tracked at conserveturtles.org/trackingmap/?id=226.

As part of the tour, sea turtles are tagged and released from beaches in Costa Rica, Panama and Florida. The turtles then compete in a “marathon” to swim the most miles over three months. During the tour, the turtles are expected to travel to seagrass beds to restore weight lost while nesting.

Evans said he investigates whether loggerheads travel to one consistent foraging ground or multiple locations to feed.

He said his work has shown there are multiple places the sea turtles forage, including the Bahamas and Cuba.

“That’s part of this research, to really emphasize how international sea turtles are,” Evans said. “Sea turtles that nest on our beaches, more often than not, go to other countries to feed. So it becomes really important to find those connections and figure out which countries we need to try to work with to protect them as a shared resource.”

This turtle was named Bortie Too, as Bortell’s also sponsored its predecessor, Bortie, which was AMITW’s contestant in the 2018 marathon.

Bortie traveled 359 miles between Anna Maria Island and Everglades National Park during its migration to place 10th out of 14 contestants when the race ended Nov. 1, 2018.

As of June 21, Bortie’s tag was still active.

In 2017, AMITW won the Tour de Turtles with Eliza Ann, a more than 300-pound loggerhead that traveled 1,693 miles during the marathon and crawled ashore four times. This was the first time AMITW had proof of a sea turtle nesting multiple times in one season on the island.

“We just got nearly two years off of her transmitter, which is excellent,” Lexie Beach, STC communications coordinator said June 21.

Beach said the Anna Maria Island release was the first tagging in the United States for the 2019 tour.

“It really was amazing,” she said. “This is the biggest crowd we’ve ever had, and I think everyone really looks forward to it.”

Ileana Szasz of Kissimmee, who traveled to the island for the release with her children, Broderick, 5, and Stellarose, 1, said, “It was just a really beautiful thing to see a group of people come together like this to support sea turtles and also to share this once-in-a-lifetime experience with my children.”

She added, “I get goosebumps just thinking about it.”