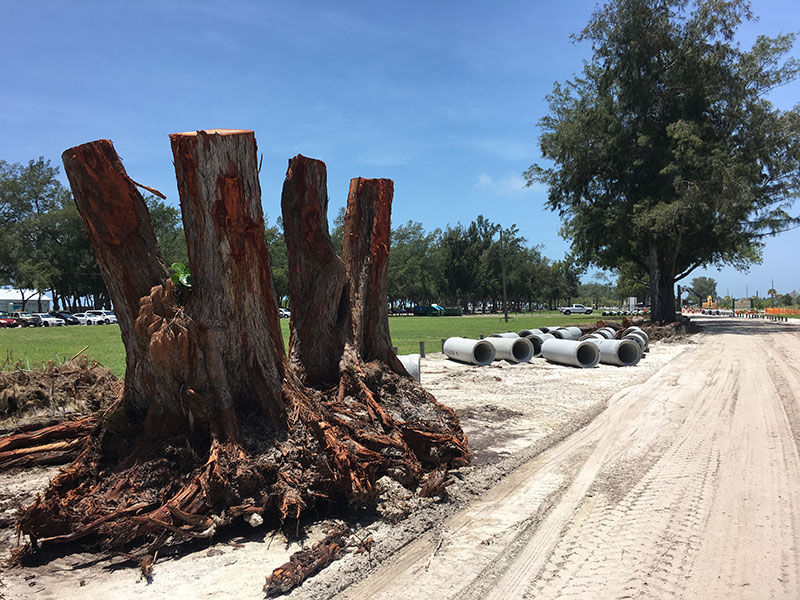 The remainder of six Australian pine trees removed to make way for a storm-drain project at the south end of Coquina Beach in Bradenton Beach await removal June 20 at the side of the access road. Islander Photo: Ryan Paice

Manatee County will remove more than 10% of the 991 Australian pine trees at Coquina Beach in Bradenton Beach for the first phase of its parking lot drainage improvement project.

The fate of another 13% or 129 of the Australian pine trees at Coquina — marked for removal for the second phase of the project — remains undetermined.

County commissioners voted 4-2 June 18 for the removal and replacement of 97 Australian pine trees during the first phase of the project, which involves installing underground stormwater drainage pipelines and laying pervious concrete along an access road and in the south parking area to ease flooding in the wake of heavy rains.

Coquina Beach is in Bradenton Beach, but the county manages and maintains the park.

The motion, made by Commissioner Priscilla Trace and seconded by Commissioner Vanessa Baugh, directs the board of county commissioners to hold a work session to discuss options to reduce tree removal in the second phase of the project.

The motion also calls for staff to create landscaping plans for both phases to specify how and where trees would be replaced.

Commissioner Reggie Bellamy attended the meeting, but left before the board discussed the agenda item.

The county commission previously approved removing six trees from the south end of Coquina to keep work on the project moving forward after a standstill over the pine trees, said to obstruct construction plans after Bradenton-based contractor Woodruff and Sons began work in April.

Chad Butzow, interim director of the county public works department, led the presentation of a staff report on the drainage project and planned tree removal before commissioners voted. He recommended the county proceed with the project and remove all 97 Australian pine trees in question.

Butzow emphasized the need for improvements at Coquina, showing a video of flooding incidents.

He said the 97 trees he recommended removing — in addition to the six removed already — constituted a small portion of the 1,486 trees at the beach.

Michael Sturm, the county project manager on the Coquina drainage improvements, said the county hired a certified arborist to investigate the tree removal.

Sturm said the arborist recommended removing the trees because a 10-inch excavation would harm the roots of nearby Australian pine trees, leaving the trees to die and creating a public safety hazard.

However, the arborist also said the county could save 49 of the 103 Australian pine trees originally marked for removal, according to Sturm. Pruning the trees would make them less susceptible to falling in high winds, but the trees would need a year to recover. He said the trimmed trees could regain their root systems and stay healthy long-term.

Butzow said the county lacked other options to save more trees during the first phase of the project, but he was more optimistic about the second phase. He said re-engineering could save 80%-90% of the trees marked for removal for the second phase.

Discussion at the county dais

Discussion on the dais following the report began in favor of saving the trees.

Whitmore, a Holmes Beach resident who holds an at-large seat on the commission, said she did not sign off on the removal of the trees when staff presented the project and asked commissioners to investigate the cost of canceling the county’s contract with Woodruff and Sons.

“This area of Manatee County will look like every sterile beach north and south of us,” said Whitmore, a former mayor of Holmes Beach. “Palm trees with no character.”

Whitmore added that she received a text message from Bradenton Beach Mayor John Chappie during the meeting in which he wrote that when the county asked for a construction permit from the city, it did not present any information about tree removal at the beach.

Benac said she was concerned removing the trees and adding so much pavement could make Coquina Beach the next Siesta Key Beach.

“I’m really concerned that we’re changing the character of this very unique area,” Benac said. “I really don’t think we’re ready to go forward on this.”

Commissioner Misty Servia was split on her decision, but the three other commissioners were firmer in their stance to remove the trees.

“I would go ahead and remove them,” Trace said. “I’d even look at starting to replace them slowly with other shade trees. I agree, we need shade trees.… But, the one part where we were talking about saving 50% of the trees — yes, that works, but it’s extremely expensive.”

Trace added that the county pays hundreds of thousands of dollars every year to remove invasive species, including Australian pine trees.

“I don’t think we’re ruining the beaches, like some of my fellow commissioners think,” said Commission Chair Stephen Jonsson, whose district includes the island. “All this is doing is really paving a parking lot to make it a little more accessible and take away the drainage.”

Baugh said that while commissioners weren’t presented with information on the tree removal, they should have expected trees to be removed for the project.

Whitmore reminded other commissioners of the 1,010-signature petition presented to the county by Chappie and circulated by Bradenton Beach resident Mike Norman and Stop Taking Our Pines activists expressing local opposition to removing the trees.

“I’m disappointed,” Bradenton Beach Commissioner Ralph Cole said in a June 18 interview with The Islander. “That’s all I can really say. I mean, there are a lot of people that don’t want those trees to come down.

“I’m curious to see what’s the plan to replace them. Do they have a tree that grows fast or something?” Cole continued.

He said the Australian pine trees at Coquina do not pose a safety hazard, even in a storm, as there are no houses to be hit by falling trees and nobody should be parked at the beach during storms with winds strong enough to topple the trees.

Cole wasn’t the only city official opposed to the county’s decision.

“The city and all of Anna Maria Island, and people of the county for that matter, need to be heard on this matter,” he said.

Commissioner Jake Spooner expressed disappointment with the county vote, but thanked Whitmore and Benac for their efforts to “save our majestic forest at Coquina Beach.”

“I think there are a lot of better improvements and enhancements that we could make than a hard-surfaced parking area,” Spooner said.

He added that replacement trees wouldn’t make up for the shade lost by the removed Australian pines for many years to come.

Mayor John Chappie said in a June 19 interview with The Islander that he too was disappointed with the county decision and had directed building official Steve Gilbert to investigate whether the city could revise or revoke the construction permit granted to the county.

Chappie added the city could revise the permit to require landscaping plans from the county illustrating the replacement plan for renewed approval or seek a higher permit fee.

Commissioners voted 5-0 June 20 to direct Gilbert to issue a stop-work order on the permit issued to Manatee County to indicate the commission’s dissatisfaction with the county’s current plans for the project.

Chappie said he would like the county to provide landscaping plans for the replacement of the removed trees, as well as potentially redesign the project to save the Australian pine trees.