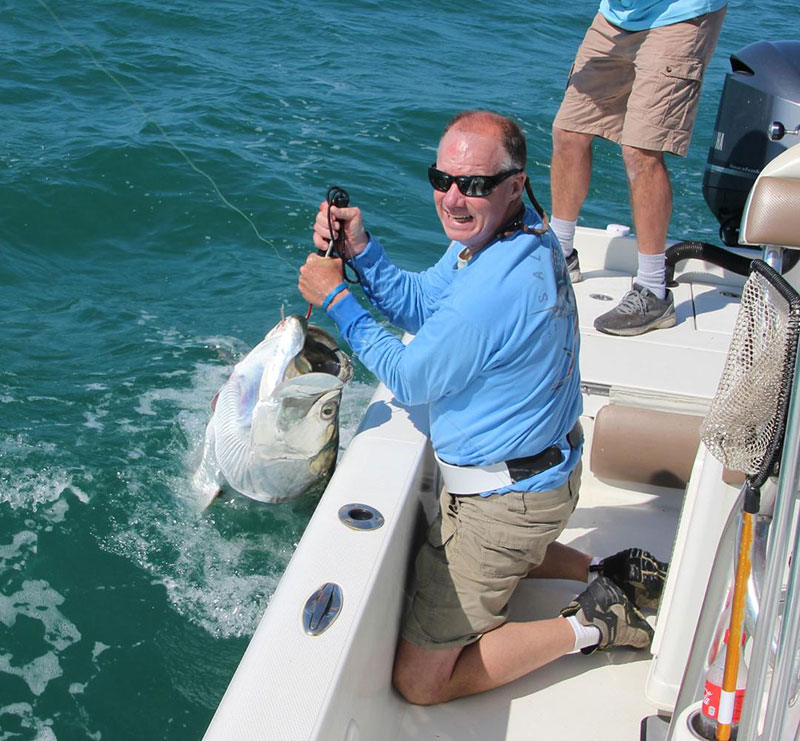 Dave Morrison, visiting AMI from Maryland, shows off the 130-pound tarpon he hooked on a pass crab May 29. He was guided by Capt. Warren Girle. 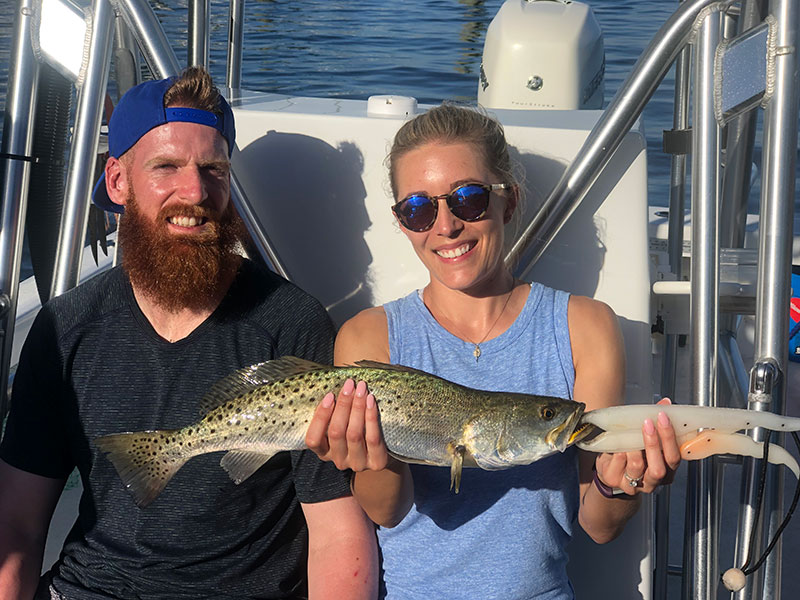 Kelsey Moran, right, shows off a nice trout she caught on a fishing trip with husband Colin and Capt. David White while taping a fun spring training TV show that will be aired in Pittsburgh. 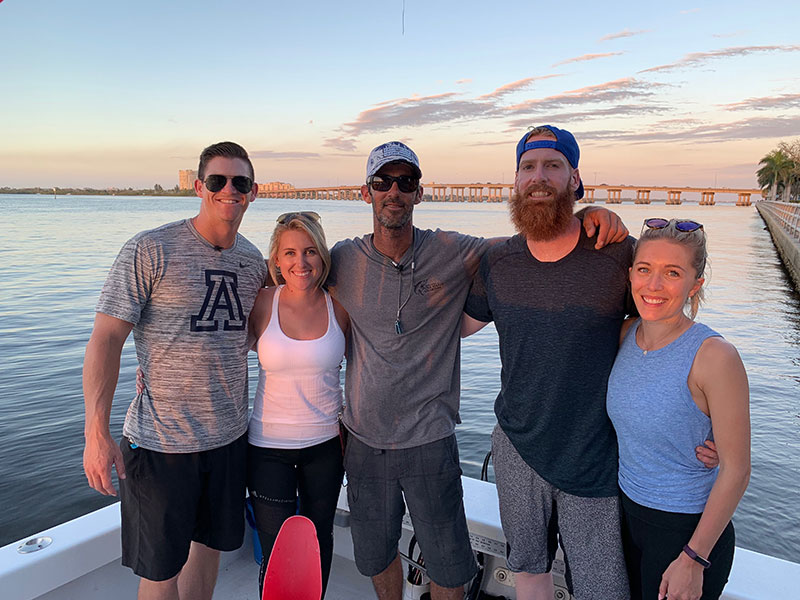 Pittsburgh Pirates shortstop Kevin Newman and his wife, Shayne, fishing guide Capt. David White, Pirate third-basemen Colin Moran and wife Kelsey pause in Sarasota Bay for a photo. They are featured in AT&T Sportsnet, a showcase of the Florida lifestyle for players and their families during spring training. The TV show was set to air in the Pittsburgh television market. Islander Courtesy Photo Shayne Newman shows off a nice snook she caught and released alongside husband Kevin on a charter fishing trip with Capt. David White.

The tarpon bite is full on in the waters of Tampa Bay.

And anglers from all over the world are aiming for an encounter with the king of sport fish.

Fishing the Gulf beaches of Anna Maria Island and Longboat Key, as well as the pass at Bean Point and the gap between the north end of AMI and Egmont Key, provides great action for those who like pulling on big fish. Live bait offerings, — pass crabs and threadfin herring — are producing the best action, although other options, such as live pinfish and shiners, also work. Sizes of the silver kings being reported are 60-120 pounds, although larger fish are in the mix.

Moving to the flats, the catch-and-release bite is going strong despite rising water temps. Catch-and-release snook are in abundance on shallow grass flats where mangroves, oyster bars and good water flow occur. The same applies for catch-and-release redfish, frequently caught while targeting linesiders. Spotted seatrout are present on the flats, although not in the shallow areas with the reds and snook. Deeper grass areas are producing the best trout numbers, especially during strong, incoming tides.

Also, offshore fishing is quite good, with guides reporting catches of permit and African pompano.

Mangrove and yellowtail snapper are being taken in respectable numbers, especially around ledges and hard bottom. And don’t forget gag grouper season is open for recreational anglers.

You can get your American red snapper fix if you’re accompanied by a federally permitted charter captain, but if you plan to go on your own as a recreational angler, you’ll have to wait until June 11.

On my Southernaire charters, I’m enjoying the tranquility of the backcountry, leaving other fishers to search for tarpon. Targeting catch-and-release snook with my clients is yielding 20-30 fish per trip, with some fish 32 inches.

Catch-and-release redfish are in the mix, and welcome.

And deeper grass flats are producing numerous catch-and-release spotted seatrout — some at 22 inches.

Lastly, wreck fishing is heating up for mangrove snapper. Some mornings, we’re seeing18-inch snapper being reeled up.

Capt. Warren Girle is in pursuit of silver kings along the Gulf beaches, as well as the pass at Bean Point and at Egmont Key. Casting live crabs or threadfin herring into schooling tarpon is resulting in bites and, on some occasions, multiple bites simultaneously. The fish are ranging from 60 to 120 pounds — and larger fish are being hooked, too.

When Girle is not tarpon fishing, which is rare this time of year, he’s putting sportfishers on catch-and-release redfish with live shiners as bait.

Jim Malfese at the Rod & Reel Pier says many anglers frequent the pier with hopes of catching the big one — and some are successful. Using live shrimp as bait is resulting in “bull” redfish. Stout tackle and a little patience are required to catch these large reds, and for those who have this combination, the reward is hookups in the 40-inch range.

Using live shrimp is resulting in some sheepshead, flounder and mangrove snapper for the cooler. Those opting to use artificials, such as jigs, are catching a smorgasbord of fish, including Spanish mackerel, ladyfish, jack crevalle and pompano.

Capt. Aaron Lowman is concentrating his mornings on catch-and-release snook in Tampa Bay. By following a recipe of strong tides combined with mangrove shorelines, lush grass and an abundance of live shiners for bait, Lowman is leading his clients to exceptional backcountry action. Also, while on the flats, Lowman is finding numerous catch-and-release trout, with some measuring up to 22 inches. Moving out into the Gulf of Mexico is producing action for Lowman’s clients, especially around wrecks and reefs. Two species worth mentioning are permit and cobia — both of which are keeping Lowman’s anglers happy.

Also, Lowman is locked in on the tarpon in the passes and along the beaches of Anna Maria Island. Casting a live crab or a threadfin herring is attracting the silver kings to bite.

Capt. Jason Stock is fitting in some quality time with his charters by tarpon fishing between offshore trips. Cruising the beaches and passes during morning incoming tides is yielding numerous confrontations with the famous silver king. Live threadfin herring and crabs are preferred baits for Stock — and the tarpon.

Moving offshore, Stock is hooking into African pompano and permit while working the wrecks and reefs. Fishing hard bottom and ledges is proving to be good, especially for big yellowtail and mangrove snapper.

Capt. David White of Anna Maria Charters is putting versatility in fishing skills to the test this week. Tarpon fishing is proving to be quite good, and White is hooking up with his share — sometimes on a fly.

Inshore fishing for catch-and-release snook is another bite that White is on, which is resulting in some exceptional days of 20-30 fish in a 4-hour charter.

Lastly, White is on patrol offshore in preparation for the opening seasons of American red snapper and gag grouper. Also while offshore, he’s spotting an occasional cobia, and instructing clients to quickly cast a large jig to attract a brown bomber.