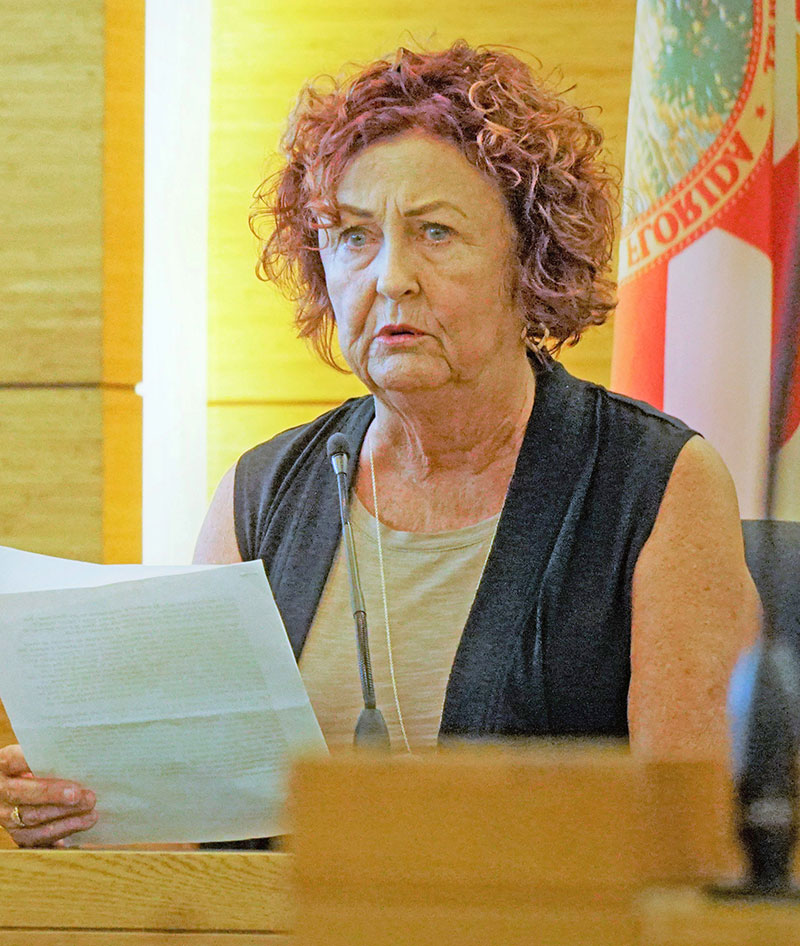 Holmes Beach resident Joan Pettigrew testifies May 28 to the physical and mental scars left by Mark Snyder who broke into her home, beat her and stole more than $50,000 in jewelry in June 2018. Islander Photos: Kathy Prucnell

The victim is grateful to see justice carried out.

Arend meted out two sentences May 28 to run concurrently, 30 years for Count I, a burglary of a dwelling with a battery, and Count II, an aggravated battery with great bodily harm to a victim age 65 or older. For Count III, a grand theft of $20,000-$100,000, the judge ordered a five-year sentence to follow the 30-year term of incarceration.

Snyder was given credit for 323 days of time served in the Manatee County jail since his July 3, 2018, arrest.

“I do forgive you but that doesn’t mean you should not pay for your crimes,” Joan Pettigrew, a Holmes Beach resident since age 4, testified while looking at Snyder in a Manatee County courtroom.

She and her adult sons, Brett and Derek Pettigrew, testified to the impact of the 2018 burglary and battery that took place at her home in the 500 block of 75th Street.

At a table with his court-appointed public defender, Snyder read a statement and looked down during much of the proceeding.

In sentencing, the judge said it was not a simple burglary case and agreed with Brett Pettigrew’s testimony that it “could have easily become a homicide.”

Brett Pettigrew said he watched while his mother had her scalp stapled together at Blake Medical Center in Bradenton and was told by emergency personnel how lucky his mom was.

Had his mother not fought off Snyder and called 911, it could have been a homicide, he said.

Derek Pettigrew spent 10 hours cleaning up blood and scalp after his mother’s attack. “Out of the horror,” he said, he realized what a heinous act Snyder had committed and “thanked God she was alive.”

In sentencing, Arend accepted Assistant State Attorney Tyler Egbert’s recommendation based on state guidelines over the defense request to depart to a lesser sentence.

The judge also sentenced Snyder to five years probation upon release, including no victim contact, a mental health evaluation and restitution, to be determined later.

Snyder’s crimes began at 1:39 p.m. June 28, 2018, when he entered the home in the 500 block of 75th Street before Pettigrew returned from a luncheon and encountered him stealing her jewelry in her bedroom.

Snyder punched her in the head and chest, dragged her through the hall and left her lying in a pool of blood, according to testimony.

Five days later, Holmes Beach police arrested Snyder at his home, 4903 Gulf Drive, Unit 5, where a parked Nissan Maxima matched a vehicle caught by a neighbor’s surveillance camera outside the victim’s house. HBPD received a tip from Snyder’s neighbor based on the footage released to the media.

At the hearing, Snyder said, “No amount of apologetic words seems adequate to express the depth of remorse I feel in my heart.”

Snyder blamed his acts on bad choices and drugs, saying he had “no intention to hurt her badly” and asked for a chance to move to another state and work for a homeless program.

Egbert argued Snyder had not shown remorse in the pre-sentence investigation, caring only what would happen to him and what his neighbors would think.

McClintock agreed that Snyder’s previous statements didn’t seem remorseful, but added, “I think it now is hitting him.”

Pettigrew and her sons encouraged the judge to accept the state’s prison recommendation because of the brutality and calculated nature of the attack.

“One human being should never do this to another human being,” Joan Pettigrew testified.

“Instead of pushing me out of the way,” she added, Snyder punched her face and body, dragged her down a hallway and left her bleeding on the floor with lacerations to her head and face, a broken nose and a bruised body.

Pettigrew testified she “lost every piece of treasured jewelry I had,” adding many were gifts from her late parents and husband.

She doubted Snyder’s story that he had dumped the jewelry in the Manatee River and Bradenton dumpsters, saying it “defies credulity.”

After Snyder’s arrest, HBPD and Manatee County Sheriff’s Office investigators found a storage locker on Cortez Road West belonging to Snyder and containing stolen art, jewelry, guns and logs with details of eBay transactions — but nothing belonging to Joan Pettigrew.

A separate case against Snyder was dropped for thefts of items in the storage unit because, according to an August 2018 state attorney memo, there was no evidence Snyder “did not permit others to store their belongings in it.”

HBPD Chief Bill Tokajer said May 29 many items were returned to victims although a statute of limitations precluded charges.

Nonetheless, he said, Snyder was responsible for multiple thefts and that he was “happy the judge saw through his last-minute attempt at remorse for his actions.”

“We know that for many years Snyder made his living by stealing from others,” Tokajer said.

In testimony, the Pettigrews thanked the HBPD, MCSO, Bradenton Beach and Longboat Key police, the state attorney’s office and other agencies assisting in the investigation.

One thought on “Holmes Beach attacker, burglar sentenced to 35 years”