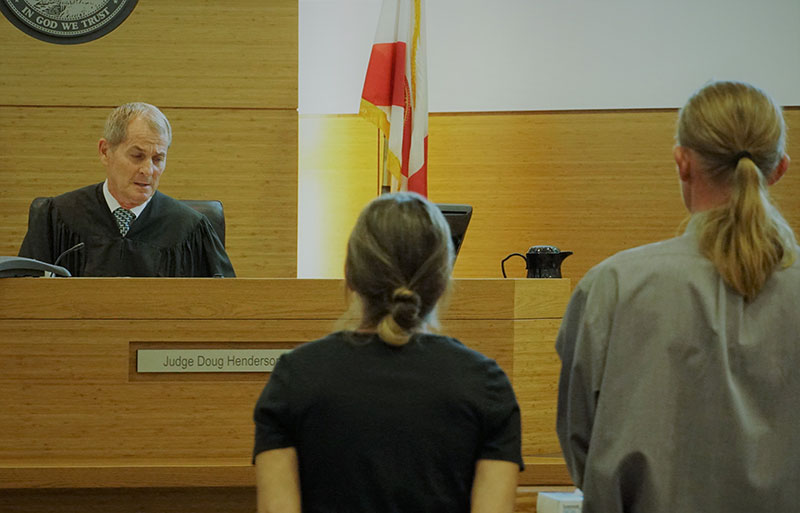 May and Jeremy Thomas appear before 12th Circuit Judge Doug Henderson June 6 on a Bradenton Beach citation that their boat failed to possess means of propulsion. Islander Photo: Kathy Prucnell

A new court date was scheduled for a man cited under a state law targeting boats at risk of becoming derelicts on the water.

Bradenton Beach police cited Jeremy Thomas, who lives on a boat anchored south of the Historic Bridge Street Pier, for violating the statute March 26 because his 30-foot 1977 cabin cruiser had no means of propulsion during an inspection.

“I’m getting harassed more than anyone else,” Thomas testified, adding he’s in the process of repairing a motor and can move the boat if necessary.

Later in the hearing, Thomas told Judge Doug Henderson he moved his boat by tying it to another boat.

Henderson said that wasn’t good enough and continued the proceeding to July 3. He instructed Thomas to bring “proof you have the motor running.”

“We just want compliance,” BBPD Officer Eric Hill said, adding Thomas was cited about a year ago under the same law that fines violators $100 for a second offense.

Hill also told the judge that Thomas owns five other boats in various states of repair. Thomas said they all run.

In an April 25 letter to the judge, Thomas asked for the hearing and accused BBPD of harassing him, issuing more than 30 tickets.

State law prohibits any person to store, leave or abandon a vessel that is wrecked, junked or dismantled on state waters.

The Bradenton Beach anchorage is in Sarasota Bay, where BBPD received state authority in June 2006 to exercise police powers in the bay, 500-800 feet from its mainland borders to the Intracoastal Waterway and 500 feet into the Gulf of Mexico.