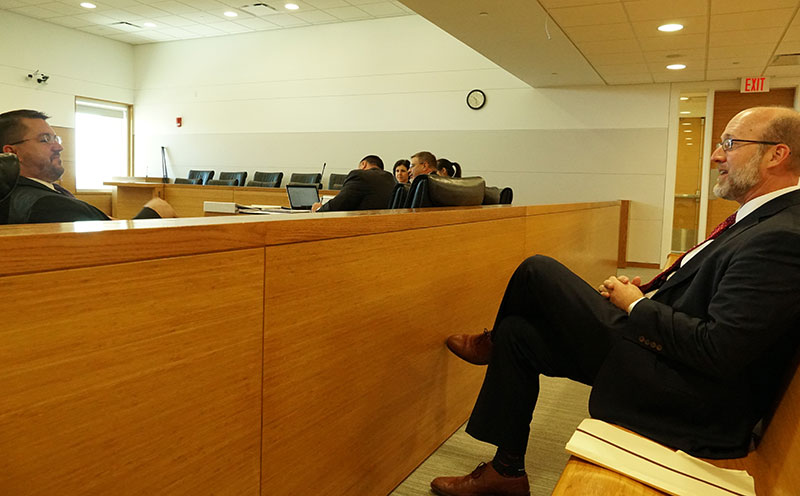 Attorneys Jason Gaskill, representing Shawn Kaleta and related companies, and Fred Moore of Blalock Walters, for the city of Bradenton Beach, chat before a June 4 hearing about Manatee County’s quest for legal rights over property where a sewer runs through Bradenton Beach. Islander Photos: Kathy Prucnell

And though Kaleta and his companies’ three properties are the only owners in the suit, a surveyor’s affidavit brought to the court’s attention suggests owners of 32 additional lots would be impacted by a 2001 Bradenton Beach resolution the county wants to see invalidated.

Nicholas dismissed the claims with prejudice — meaning the owners cannot re-plead. Remaining in the Kaleta amended counterclaims are counts for trespass and ejectment.

The judge also denied the owners’ motion to dispose of count I of the county’s complaint, which seeks to invalidate a 2001 Bradenton Beach resolution. Other counts ask the court to impose an implied easement and prevent pool construction and other uses of the right of way.

The resolution vacated Bay Shore Drive, also known as Bay Drive South, which was platted but never constructed, and transferred the land to adjacent property owners.

With its complaint, the county is seeking a judge’s order to obtain control over property around a sewer installed 40 years ago under the three Kaleta properties, alleging the city resolution was invalid and the properties remain subject to the right of way.

According to surveyor affidavits brought to the judge’s attention June 4, the resolution impacts 32 other lots whose owners have not been made parties to the suit.

Attorney Jason Gaskill, of the Sarasota law firm of Adams and Reese, represented Kaleta and his companies.

The city of Bradenton Beach is a party to the proceedings but did not participate in the hearing.

Gaskill asked the judge to dispose of count I because it fails to include the numerous owners affected by the resolution.

DeCarlo contended the surveyor who identified the encumbrances improperly took an adversarial position to the county based on another contract.

In ruling on the partial summary judgment, Nicholas found insufficient evidence to establish indispensable, unnamed parties would lose the title to the property if the judge invalidates the 2001 resolution and the county should take up its issue with the surveyor in another way.

The county’s position, according to DeCarlo, is that the counts filed in August 2018 were past a four-year statute of limitations.

He contended the clock began to run with the recording of the resolution Oct. 31, 2001, when it was “made known to all.”

Gaskill contended the resolution was not part of his counterclaim and shouldn’t be considered under a rule limiting the judge to the “four corners” of a pleading.

Additionally, he argued an exception to the four-year rule based on the discovery of the sewer line in September 2016, when Kaleta applied to the city for swimming pools and was denied permits.

DeCarlo countered that the discovery exception doesn’t apply because, if it did, every time properties changed hands, it would spur claims of new knowledge, rendering statutes of limitations ineffectual.

In the end, the judge sided with DeCarlo.

“This isn’t like a pipe that was buried. This was an official recording. And it puts people on notice that the statute of limitations could be running,” Nicholas said in the ruling.

After the hearing, Gaskill told The Islander, “I’m shocked by that ruling,” adding he plans to appeal the dismissal of the claims after the case ends in circuit court.

At a June 6 city meeting, Bradenton Beach commissioners decided to maintain their support of the 2001 resolution, with Mayor John Chappie and Commissioner Jake Spooner saying they would decline a county offer to settle the case.