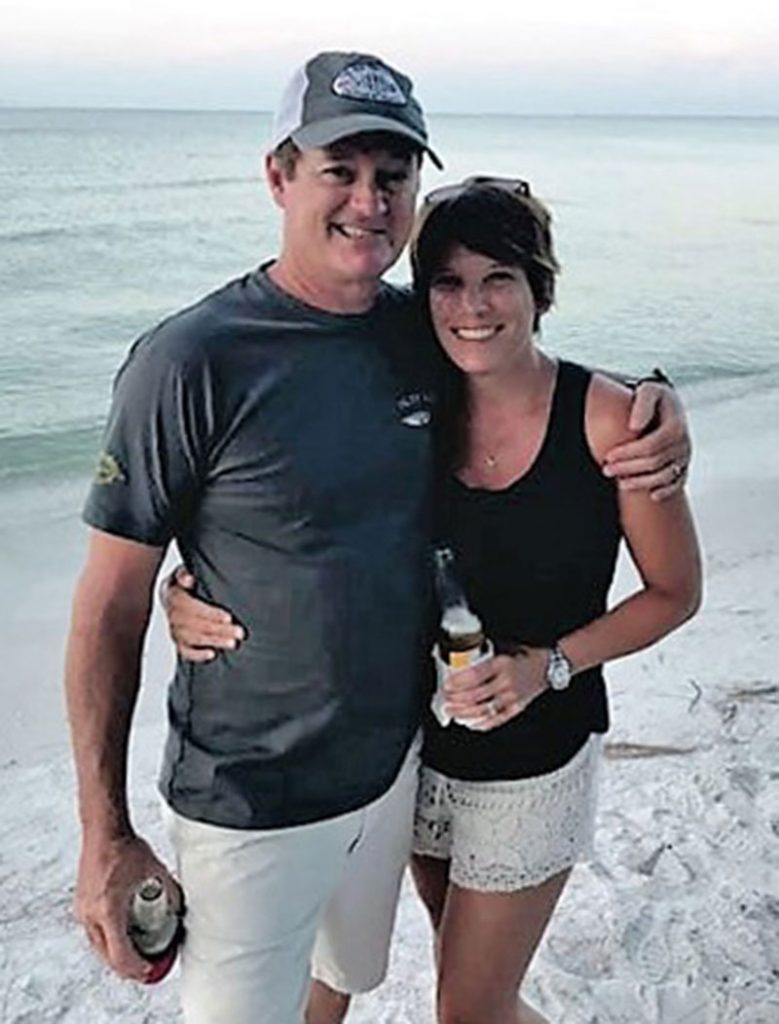 Merritt and Jennifer Yeager of Beaufort, South Carolina, embrace June 12 while vacationing in Holmes Beach. Merritt Yeager’s prosthetic ear washed off in a wave that day, later setting off a scavenger hunt by law enforcement for its owner and a social media sensation. Islander Photo: Courtesy Merritt Yeager

When a woman approached a Holmes Beach police officer at the World’s Strongest Man Competition June 16, she turned over an unusual beach find.

She had found a prosthetic ear on the shoreline near 36th Street, just south of the Manatee Public Beach, where the contest took place.

“It’s the strangest item we ever got,” HBPD Chief Bill Tokajer told The Islander June 20, just hours after the mystery was solved and the ear’s owner located in Beaufort, South Carolina.

“We usually get cellphones, keys, jewelry. But an ear? That was a first,” Tokajer said.

The mystery was solved thanks to social media and a quirky beach story that moved from the HBPD’s Facebook page to local news and then to The Associated Press by the morning of June 20.

Jennifer Yeager was excited when she called HBPD to claim her husband’s prosthetic ear. A friend in Aiken, South Carolina, had read about the found ear on social media and knew her friends had just returned from Anna Maria Island.

The friend contacted Yeager, who phoned the HBPD.

“They have already sent documentation proving it is their ear,” HBPD Detective Sgt. Brian Hall said. “It’s going out in the mail today.”

Merritt Yeager was busy at work June 20, making signs at the family business, All Signs, in Beaufort, when The Islander contacted him.

How did you lose the ear? The Islander asked.

“Oh, I was out riding Marvin the Manatee and I got hit by a big wave. Didn’t they tell you?” he joked.

“Really I just got hit by a wave and it got knocked off. It’s a little horrifying, but there is humor there,” he added.

He was thankful a woman found the ear and turned it in. There was no identifying mark on the prosthesis and no way to locate its owner.

Efforts were made to contact manufacturers in the area by the HBPD and, in a twist, the doctor in Naples who had crafted the ear was one of the contacts.

However, “without serial numbers, he had no way of knowing whose ear had been found,” Yeager said.

“But I am really glad to have it back. They are quite expensive,” he added.

The Yeagers had learned about Anna Maria Island as a destination on Facebook, liked what they saw and came for a summer vacation.

“We live on the coast, but it’s different. We had a great time there. I ate a lot of fish tacos. I was grilling fish at 8 a.m.,” Yeager joked. “It was beautiful.”

As for the ear, Yeager can’t wait to get it back.

“My sunglasses are hanging off on one side,” he said, with a laugh.

One thought on “You heard right: South Carolina man reunited with ear found on beach”