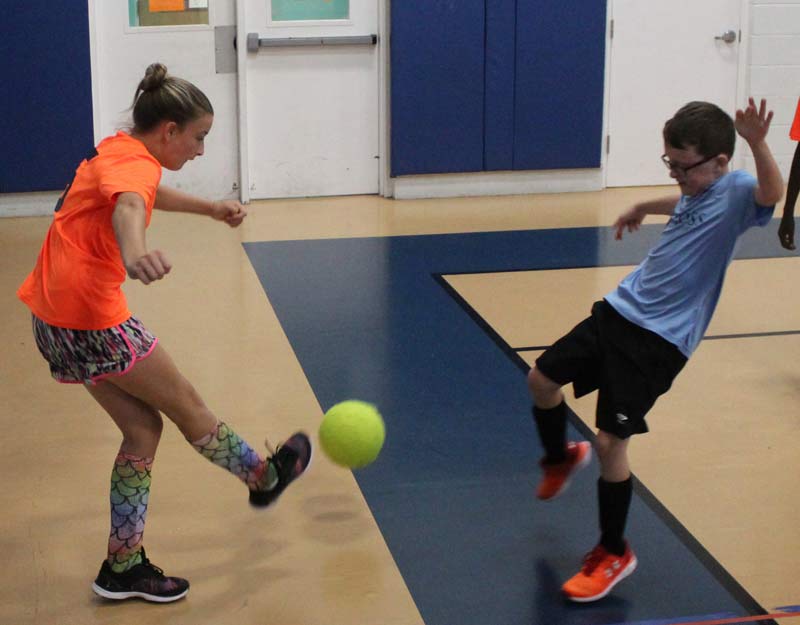 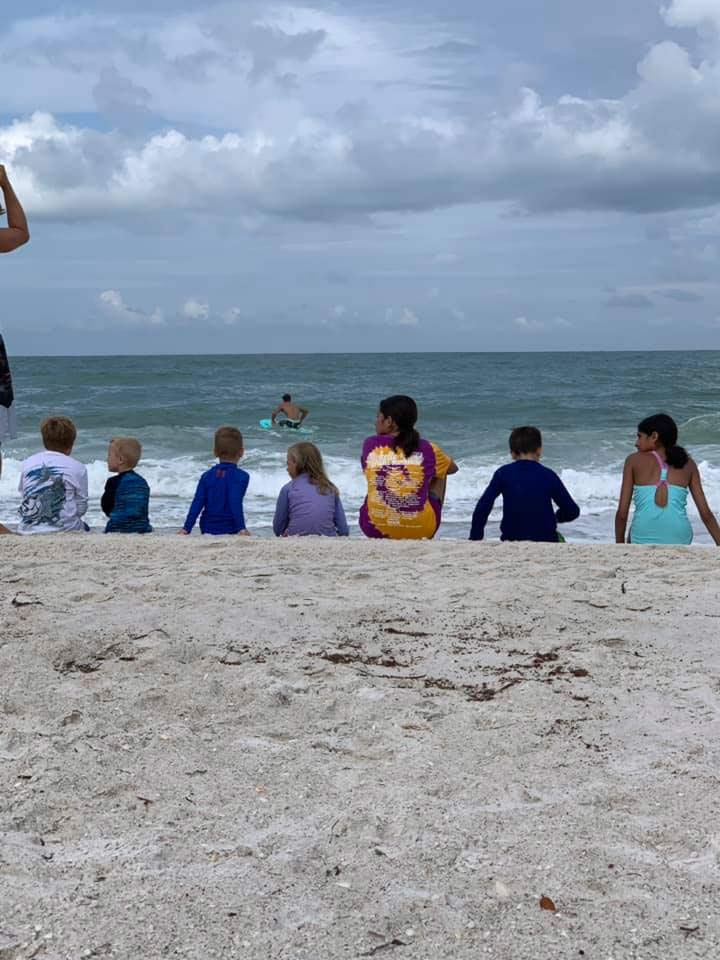 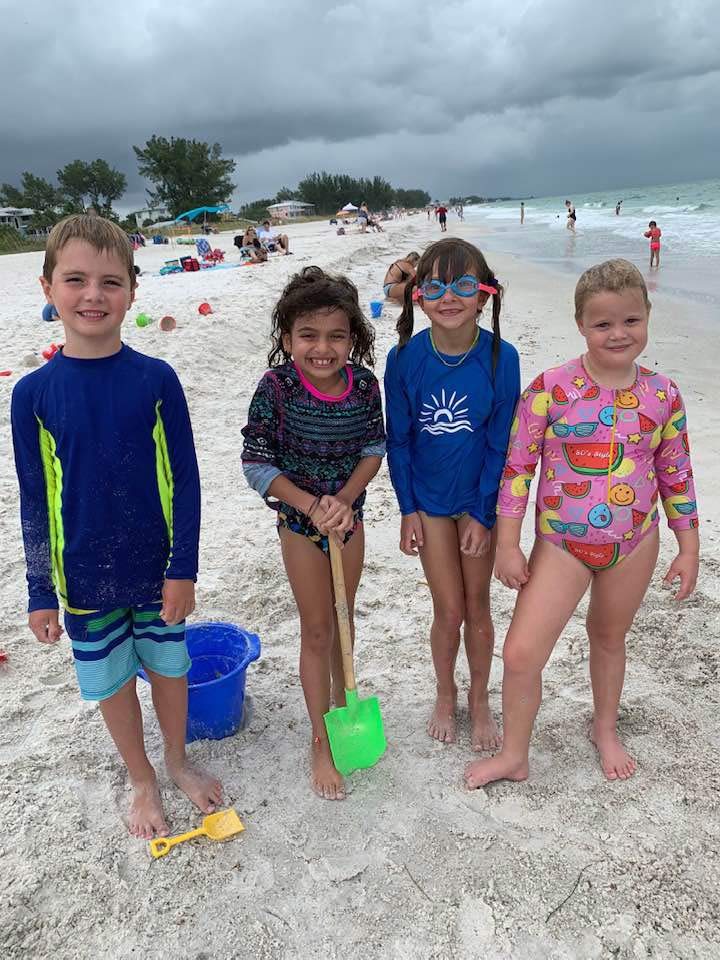 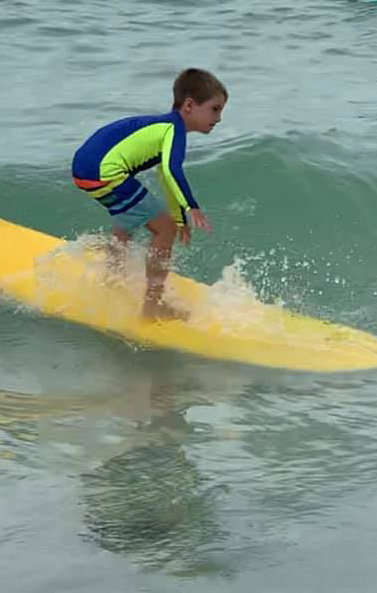 Endless summer (fun) “Will’s first surf camp! The week of some really big waves! Everyone at West Coast Surf Shop was so great to these kids,” wrote Christine Torgeson van Zandt, grandmother of Will Cross, age 7, of Gainesville, on her Facebook page. Will is pictured left and above, left, with three campers. The last day, July 12, produced some rough waves and a rip tide, but, she said, they had a fun day. The more experienced kids surfed, some other kids rode close to the shore. They had a beach clean up, a talent show and pizza. Will said, “I want to go back next year!” Islander Photos: Christine Torgeson van Zandt.

After a few weeks of action, the indoor soccer league at the Center of Anna Maria Island is in full swing and the action is fast and furious in the gym.

End-to-end play with lots of scoring and a rowdy crowd cheering the players from the stands on the stage make for an exciting sports arena.

The advanced division has G&G Yardscaping pulling away from the crowd among three teams of 10-14-year-olds. G&G leads with a 4-1 record as AMI Locals post a 2-2-1 record and try to keep up. Ugly Grouper rounds out the standings with a 1-3-1 record.

Standings in the intermediate division for players ages 5-9 tighter. Ugly Grouper and Moss Builders share the top spot with 3-0 records, well ahead of third-place team Cloud Pest Control, which has a 1-2 record. Island Vacation Properties holds down the fourth spot with a 1-3 record, while Solid Rock Construction is in last place with three losses.

Action July 16 kicked off with Cloud Pest Control taking on Island Vacation Properties in the intermediate division. Cyrus Ryan came through with a hat trick to lead Cloud to a 3-2 victory. Vacation Properties was led by Clancy Cusack and Kason Davis, who each scored a goal in the loss.

The second match of the evening was a battle between Moss Builders and Solid Rock Construction.

The first half saw Moss putting a lot of pressure on the Solid Rock defense, but center back Emma Raulerson and her fellow defenders were up to the task, turning away attack after attack in the scoreless first half.

The second half saw Moss finally capitalize on the pressure as Dylan Sato scored twice and Jackson Titen added a goal to close out a hard-fought 3-0 victory.

The advanced division took over the gym the same evening, with AMI Locals taking on Ugly Grouper. The Locals ran away with a 5-1 victory behind three goals from Savana Coba and two goals from Evan Talucci.

Will Wright notched the lone goal for Ugly Grouper in the loss.

The final match saw G&G Yardscaping roll to a 6-1 victory over Ugly Grouper behind three goals and an assist from Connor Samblis. Cale Rudacille, Ryan Joseph and Katie Stembridge each added a goal and an assist in the victory.

Victor Albrecht scored for Ugly Grouper in the loss.

The action was set to continue with four back-to-back matches starting at 5 p.m. Tuesday, July 23, after The Islander went to press.

Steve Doyle drew the bye and watched as Tim Sofran advanced to the finals with a 21-13 victory over Jerry Disbrow and Hank Huyghe. The championship match saw Doyle earn bragging rights for the day, outlasting Sofran by a 21-15 score.

There was no need for a playoff at the July 20 games, thanks to a furious rally by Neil Hennessey in his third and final pool play match. Trailing 17-9, Hennessey rallied for a 23-20 victory for the lone 3-0 record and the day’s championship.

Golf at Key Royale Club was rained out.