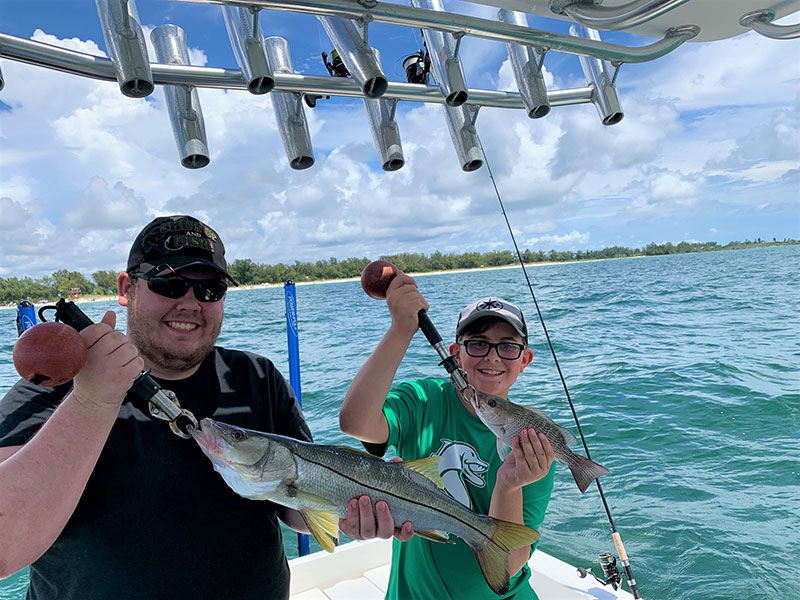 Brothers Nick Selin, left, 18, and Jackson, 13, visiting from New Jersey, competed Aug. 5 for the most fish — both had 10 — when Nick topped off the day with this snook. They fished nearshore using shiners for bait with Capt. Warren Girle, who noted all fish were released.

For anglers who don’t mind dodging a few thunderstorms, fishing around Anna Maria Island is providing some good action.

Fishing in and around Tampa and Sarasota bays offer good inshore action on a number of species — the most dominant bite happening over structure.

Anchoring and chumming is bringing Spanish mackerel and mangrove snapper to the boat. This bite is good for those who crave a seafood dinner.

For sport anglers who seek action, catch-and-release spotted seatrout are a good bet.

Fishing over deep grass flats in Tampa Bay, or any of its adjacent waters to the south and east, is yielding a good trout bite. Even better: There are plenty of ladyfish and macks mixed in with this bite for a little variety.

Catch-and-release snook fishing is producing action, especially along the beaches. Look for schools of snook cruising the shorelines during calm periods of the day — mornings and evenings are best.

Moving offshore, mangrove and yellowtail snapper are keeping the offshore fishers happy. Both provide good action on medium spinning tackle and are great on the plate. Permit fishing is good, especially over some of the offshore wrecks, where fish 10-20 pounds are being reported.

Lastly, amberjack are again open to harvest, which creates a new target for offshore anglers, especially those with a smoker.

On my Southernaire charters, I’m spending time fishing over structure in Tampa Bay where Spanish mackerel and mangrove snapper are taking the bait from my clients. Free-lining live shiners on an Eagle Claw Aberdeen hook is producing the best bite.

Moving to the flats, I’m putting anglers on catch-and-release spotted seatrout. Mixed in with the trout are ladyfish, mackerel and a handful of mangrove snapper for the cooler, which keeps clients happy.

Getting on the shallow flats of 3 feet or less during the high tides is yielding some decent-sized catch-and-release snook and redfish.

Capt. Aaron Lowman is targeting catch-and-release trout over the deeper grass flats of Anna Maria Sound and Terra Ceia Bay. While doing so, he’s putting clients on a variety of other species, including macks, ladyfish and mangrove snapper.

Moving to slightly shallower grass flats — especially around oyster bars and mangrove islands — is resulting in hookups on catch-and-release snook and redfish. Fishing over structure in Tampa Bay also is producing a bite from Spanish mackerel, mangrove snapper and gag grouper.

Capt. David White of Anna Maria Charters is beating the heat on nighttime fly fishing charters, targeting canals and the Manatee River. Casting flies around docks with green underwater lights or a classic snook light is yielding a good variety of species. Catch-and-release snook, redfish and spotted seatrout are being caught, along with jack crevalle.

Getting back to daytime fishing with live bait, White is hitting the artificial reefs for macks and mangrove snapper, along with some ladyfish and juvenile grouper.

Capt. Jason Stock is enjoying the hunt offshore for yellowtail and mangrove snappers. Chumming over wrecks and hard bottom is bringing these fish up to feed, resulting in respectable-sized catches of both species. Free-lining baits in the chum slick also is producing an excellent bite.

Permit fishing over the offshore wrecks is producing great action. Live pass crabs drifted over these structures is luring 15- to 20-pound permit to the hook.

Lastly, targeting amberjack with artificials such as top-water poppers is leading to some explosive strikes and some long battles for Stock’s anglers.

Jim Malfese at the Rod & Reel Pier is happy to report the mangrove snapper bite is on the upward swing. The fish are there now, and he predicts the bite will get better in the weeks to come. Good numbers of these fish are taking up residence under the pier, just waiting to be fed a live shrimp on a small circle hook tied to a light fluorocarbon leader.

Other species frequenting the R&R include Spanish mackerel, jack crevalle and ladyfish.

Capt. Warren Girle is finding action over the nearshore reefs in the Gulf of Mexico. Free-lining live shiners on a long shank hook is resulting in numerous hookups of the macks. To really get the bite going, Girle is chumming with an ample amount of shiners. This not only gets the macks feeding, but keeps them within casting distance of the boat. Also, while fishing the reefs, Girle is switching to a bottom rig, yielding mangrove snapper and juvenile groupers for his clients.

Moving into Tampa Bay, Girle is working deep grass flats for catch-and-release spotted seatrout. While on the trout bite, his clients are hooking into ladyfish and mangrove snapper.

Lastly, Girle says fishing the shallow flats is resulting in some catch-and-release snook.