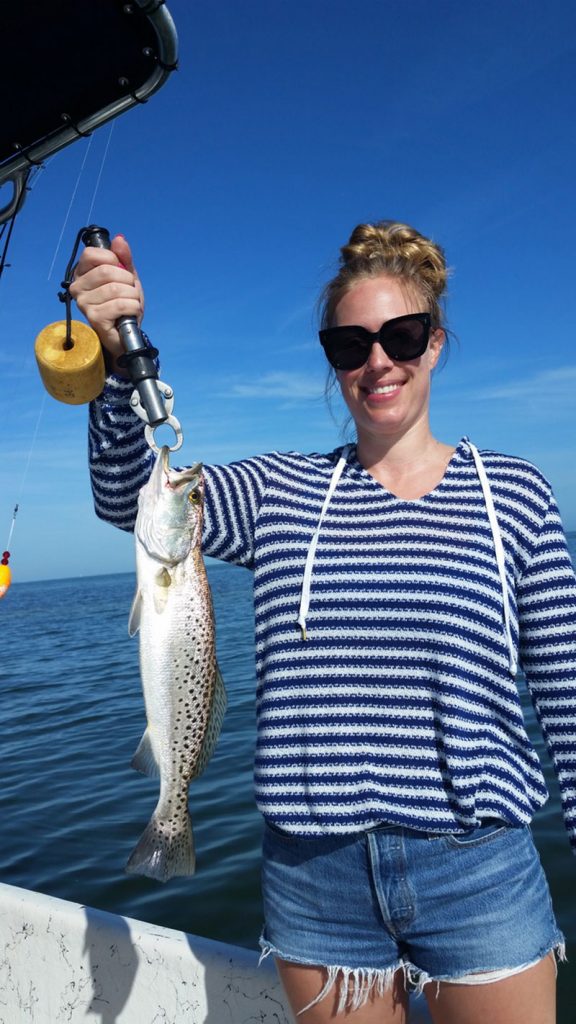 Kate England, visiting Anna Maria Island from Leonardo, New Jersey, holds one of the many seatrout she and husband Raymond caught — and released — March 16 while on a charter fishing trip with Capt. Aaron Lowman. Lowman said, “This trout — and many more — devoured live shiners in Tampa Bay.” The Englands also had keepers of Spanish mackerel and mangrove snapper for dinner, as well as some snook that were released.

Despite the dark cloud of Coronavirus looming overhead, those willing to get out of the house and go fishing are reaping the rewards of the springtime bite around Anna Maria Island.

Fishing inshore is heating up, especially for the popular trio of catch-and-release species — snook, redfish and spotted seatrout.

While fishing the flats and casting live shiners where mangroves and oyster bars exist, the snook and redfish action is quite good. Specifically targeting the reds is good in the canals and around docks and pilings. In this scenario, live shrimp is the best bait. And, in these areas, there’s also a chance of catching some late season sheepshead and black drum — which gives the angler the option of taking a fish home for dinner.

Moving offshore, the springtime bite is following suit. Migratory species — kingfish, amberjack and cobia — are being caught with regularity. Blackfin tuna are in the mix, as well as bonito, sharks and permit.

Bottom fishing offshore is good, too, with numerous red grouper and mangrove snapper being reeled up from the depths.

On my Southernaire charters, I am concentrating on the flats. On the deeper grass flats, catch-and-release spotted seatrout are attainable. Catching 20 or 30 trout on a morning charter is real — not to mention the mix of other species. We’re finding Jack crevalle, ladyfish and Spanish mackerel prowling the flats in search of a tasty morsel. These species add a welcome variety to the trout bite.

Fishing shallow flats along the mangrove shorelines also is providing great action for my clients. Catch-and-release snook are being accommodating while some catch-and-release redfish also are finding the hook.

Jim Malfese at the Rod & Reel Pier says there are some post-spawn sheepshead being caught by pier fishers using live shrimp, although most are right at the 12-inch minimum length.

While targeting the sheepies, anglers are hooking into an occasional black drum and some flounder.

Casting jigs from the pier is proving to be good for Spanish mackerel. Morning hours seem to be the best for targeting macks, according to Malfese.

Capt. Warren Girle is working inshore with good results. He says fishing in the residential canals where docks and seawalls are present is providing action on a variety of fish, including black drum, jack crevalle and catch-and-release redfish. In these areas, live shrimp is Girle’s bait of choice.

Moving out of the canals to the grass flats is working, too. Casting jigs over deep grass flats is resulting in many catch-and-release spotted seatrout for Girle’s clients. Tipping the jigs with fresh-cut shrimp is adding enticement and attracting plenty of other species, including pompano, jack crevalle, ladyfish and some macks.

Lastly, Girle reports that bottom fishing in the Gulf of Mexico is equally good. Live shrimp as bait is bringing mangrove and lane snapper to the hook, as well as some sheepshead.

Capt. Aaron Lowman is working at the nearshore structure in the Gulf of Mexico, where a live shiner on the hook is working well for a number of species — Spanish mackerel, mangrove snapper and jack crevalle.

Moving inshore around the deeper grass flats is producing good action for anglers using shiners as bait. The primary action is from catch-and-release spotted seatrout with a mix of ladyfish and jack crevalle taking the bait.

Lastly, fishing shallow flats — depths of 3 feet or less — is resulting in catch-and-release action on redfish and snook. Mangrove edges around oyster bars are prime territory to find these species, according to Lowman.

Capt. Jason Stock says spring fishing is in full affect on his boat. While working offshore, Stock is putting clients on migratory species — blackfin tuna and amberjack — in abundance.

Bottom fishing around wrecks and hard bottom is working well for yellowtail and mangrove snapper, as both are being caught with ease by Stock’s clients. Other species being found around structure include bonito, shark and flounder. Lastly, casting live crabs over offshore reefs and wrecks is proving to be quite good for permit.

Capt. David White is taking advantage of the calm, clear waters that have settled in around our area. Venturing offshore is producing results on a number of migratory species — kingfish, cobia, bonito and Spanish mackerel.

Bottom fishing offshore is producing red grouper and mangrove snapper for the coolers.

Moving inshore, White is having similar results for his clients, who are hooking sheepshead around local structure in Tampa Bay. In the same areas, macks are being found in abundance. He’s also reporting the catch-and-release action on the flats is good, too, especially for snook and trout.