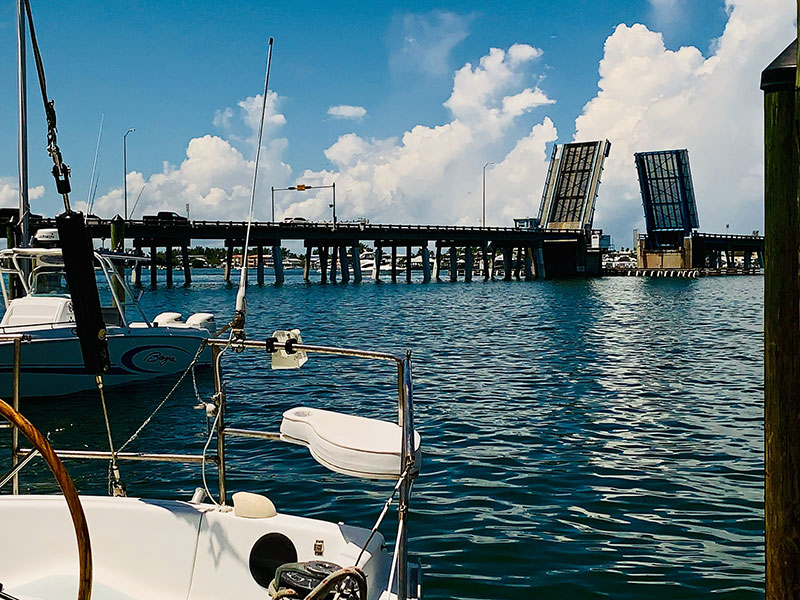 The view from the Seafood Shack Marina Bar and Grill includes the draw opening on the Cortez Bridge Aug. 4. The DOT has recommended replacing the drawbridge with a high-fixed span bridge. Islander Photos: Sarah Brice 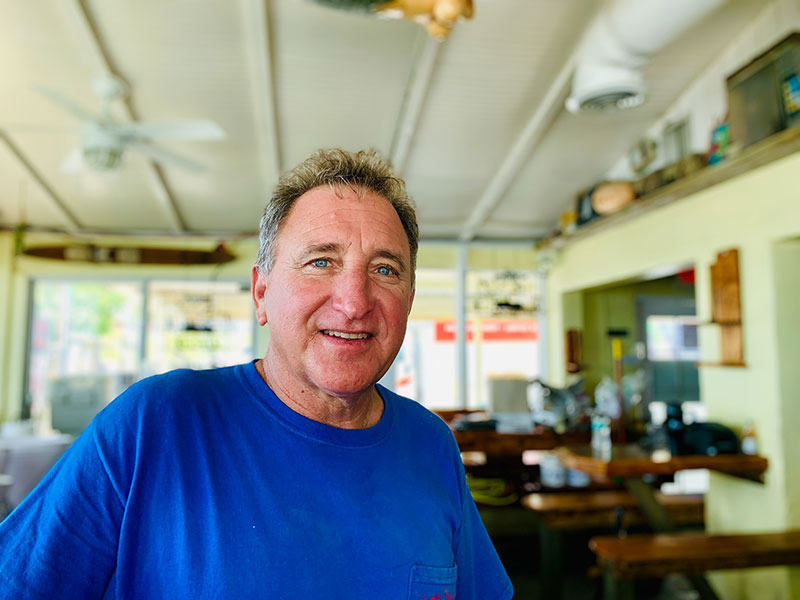 Tide Tables restaurant owner Bobby Woodson is confident loyal patrons will still find his waterfront restaurant — at the southeast corner of the Cortez Bridge in Cortez — during construction and after the new bridge is built. Islander Photos: Sarah Brice 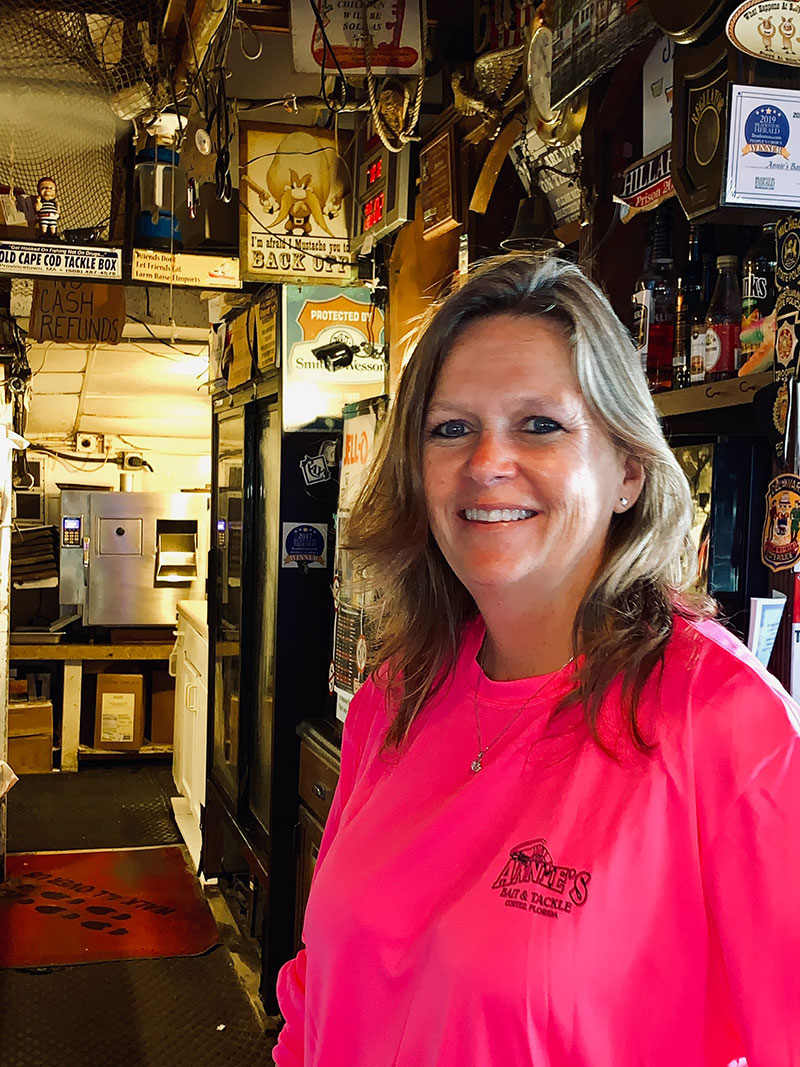 Kim Shepherd, 26-year owner of Annie’s Bait and Tackle at the base of the Cortez Bridge, is concerned that a megabridge linking Cortez to Bradenton Beach would harm the Cortez community. 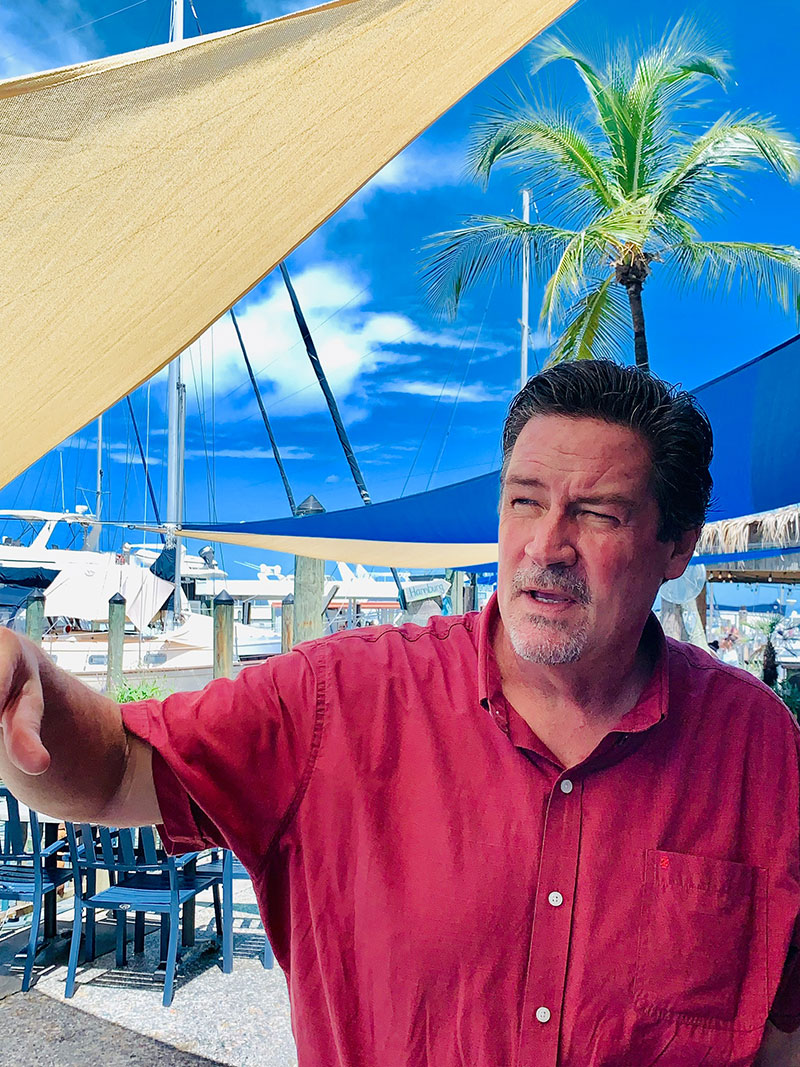 Joe Rogers, chief operating officer of the Seafood Shack Marina Bar and Grill, says a new bridge is needed but he believes how big a span should reopen for debate. 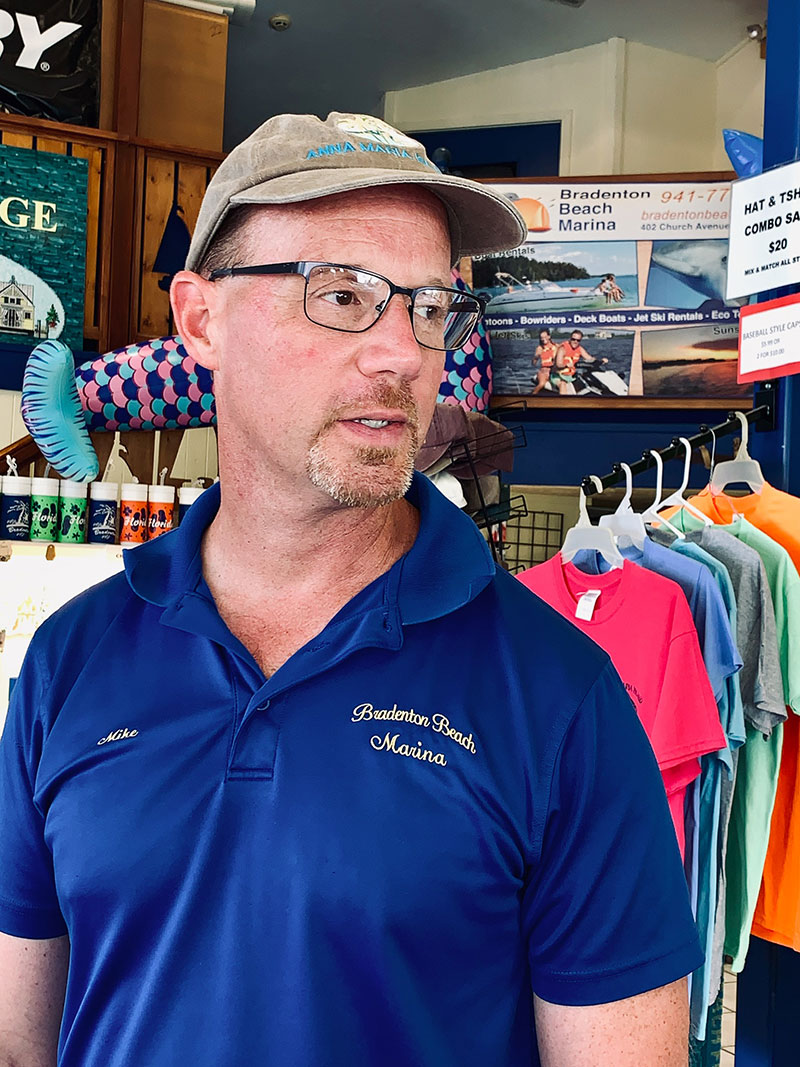 Michael Bazzy, whose family has owned the Bradenton Beach Marina since 1981, says although construction may affect his business at the base of the bridge in Bradenton Beach, he’s not concerned. He added, he has good relations with the DOT. 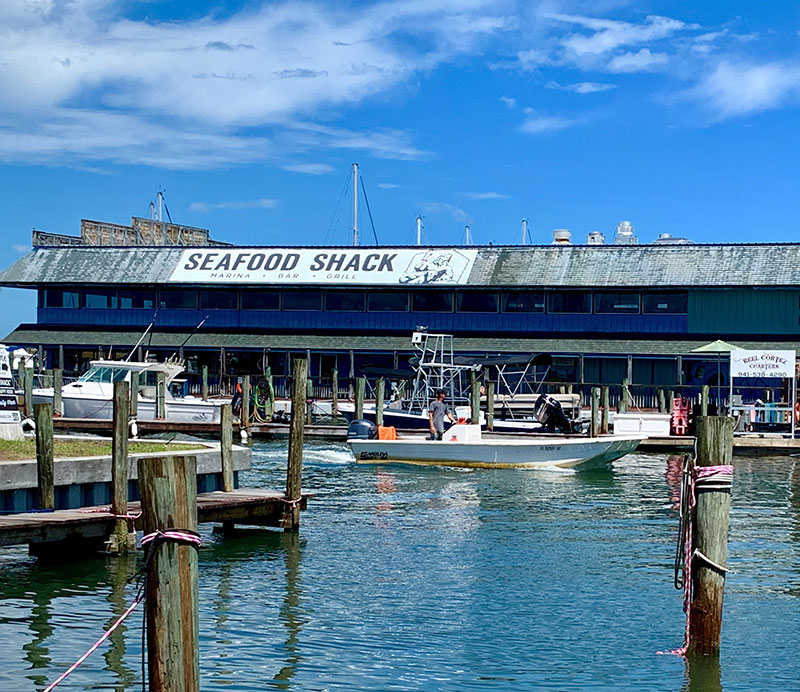 The view looking north across the deck at Annie’s Bait and Tackle in Cortez includes activity at the Seafood Shack Marina Bar and Grill in the fishing village of Cortez. The views from Annie’s and the Seafood Shack include the span of the Cortez Bridge across Sarasota Bay from Cortez. 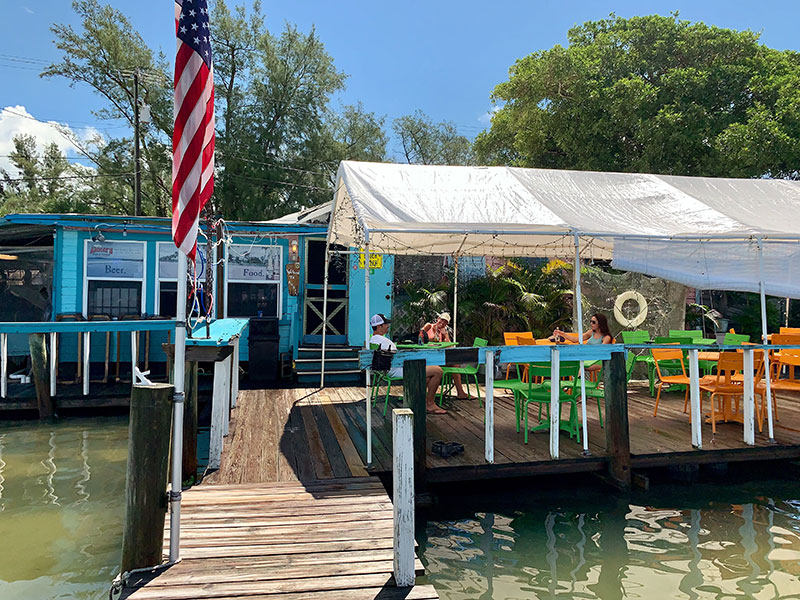 Annie’s Bait and Tackle offers patrons outdoor seating with a view of the Cortez Bridge.

If you’ve been looking forward to — or dreading — the proposed replacement of the Cortez drawbridge with a 65-foot-clearance fixed-span bridge, you’re going to have to wait a while. Quite a while.

Most likely, if it happens, it won’t be for another 10 years or so.

The DOT is expected to release results of its Cortez Bridge Project Development and Environment Study by the end of the year. The study, started in 2013, determines what environmental, economic, social, cultural and physical effects the new bridge would have on the area, particularly the historic fishing village of Cortez.

After that would come the design phase, then right-of-way acquisition, then finally construction.

About $6.4 million has been allocated for design, which has been awarded to the engineering firm H.W. Lochner Inc., but design work has not started, the DOT’s Rick said in a phone interview Aug. 5.

Once design begins, it will take about two years to complete. The DOT likely will hold public meetings during that time period, Rick said.

Right-of-way acquisition is expected to be funded for fiscal years 2024-27, beyond the scope of the DOT’s current five-year work program, which ends in 2023-24. So that aspect of the new bridge is not funded.

Construction is not funded either.

An April 23, 2018, announcement by DOT communications manager Zachary Burch said the agency recommended the fixed span and design was scheduled to begin later that year and right-of-way acquisition was funded for fiscal 2020 and 2021. But Rick told The Islander additional work needed on the project development and environment study delayed the timetable.

Some Cortez merchants are in no hurry to see the new bridge built. Count Kim Shepherd among them.

Annie’s is situated on the waterfront in Cortez at the northeast corner of the bridge.

Preliminary plans call for the eastern part of the bridge to ramp up on Cortez Road at 123rd Street West. Parts of the village on either side of Cortez Road between 123rd Street and Sarasota Bay would be connected under the bridge. Service roads would deliver vehicular traffic to that area, which is home to several businesses.

But Shepherd is not sure that would be enough.

“I think it’s going to be hard for people to get to us even with the access road,” she said in an interview in her vintage bait shop. “It’s going to affect the whole village.”

Disruption during construction would be even worse, she said, pointing to what happened during repair work to the bridge in 2015.

Some other Cortez merchants take a more wait-and-see attitude.

“I’ve been told by the DOT it’s at least eight years up the road,” said Bobby Woodson, owner of Tide Tables Restaurant and Marina on the waterfront at the base of the bridge in Cortez.

The DOT will have to keep a pathway open to his restaurant during construction, Woodson said. And he’s counting on his customers.

And by the time construction starts, Woodson said, the restaurant will have built an even larger clientele.

“We’re going to be just fine,” he said during an interview at the restaurant.

“Hopefully, people will still find us,” he said from the marina behind the restaurant. “People seek out waterfront restaurants. It’s just going to take them a while longer.

“We’ll have a ton of signage.”

On the western side of the bridge, Michael Bazzy, owner of the Bradenton Beach Marina, said he doesn’t expect to see a new span any time soon.

“I’ll believe it when I see it,” said Bazzy, whose family has owned the marina since 1981.

Regardless, he expects to come out fine.

“I’m not really concerned,” he said. “We’ve always had real good relations with the DOT.”

Rogers agrees that a new bridge is needed. He’s just not sure that it has to be the 65-foot-clearance fixed span, as recommended by the DOT last year.

“We need a bridge,” he said. “What size is debatable.”

“Future repair projects would likely increase in scope, traffic disruptions and cost, and yet decrease in effectiveness due to continued deterioration of the bridge,” the agency said in the April 2018 announcement.

Rogers said whatever is built needs to last.

The DOT says a new fixed-span bridge would have a 75-year life span.

“A fixed bridge is resoundingly the best financial investment for taxpayers,” the announcement said.

Other options were drawbridges with vertical clearances of 21 or 35 feet.

The DOT said the high span would cost $72 million to build and maintains that “construction costs, including design and construction, saves approximately $23.9 million compared to a new mid-level drawbridge.”

The high bridge, the DOT said, would save $11.2 million in maintenance and construction costs compared to a new drawbridge.

Indications six years ago were that most local residents opposed any new bridge, no matter the height.

A DOT mail survey answered by nearly 850 local residents in spring 2013 showed 51% of respondents were in favor of rehabilitating the Cortez Bridge, while 43% favored replacement.

Among local communities, Cortez had the highest level of opposition to a replacement bridge. Sixty-two percent of respondents favored rehabilitation and 33% wanted a replacement.

But the DOT decided in 2016 not to rehabilitate the bridge.

Longboat Key town manager Tom Harmer said he has been talking with the DOT about making it easier for motorists to get on and off the Key. But he said in a phone interview Aug. 6 that he realizes a new Cortez Bridge is only part of the solution.

Longboat Key residents driving off the island to the north still have traffic chokepoints at the Longboat Pass drawbridge and the intersection at Gulf Drive and Cortez Road in Bradenton Beach.

And the initial plans for the high-level bridge call for only two lanes of vehicular traffic, same as the current span.

“Our issue really is traffic congestion,” Harmer said. “We do think they should consider additional lanes [on the bridge] and intersection improvements.”

Harmer said he has made those suggestions to the DOT.

DOT officials note that a high-clearance fixed bridge would allow boat traffic to pass unimpeded, which would result in less traffic disruption.

According to the DOT, the Cortez Bridge had 3,101 openings in 2017, averaging about 258 a month. They attributed fewer openings in 2018 to the extended red tide outbreak, so it’s not representative of a typical year. Bridge openings so far this year are comparable to 2017 levels, the agency said.

Over at Annie’s, where you can almost reach out and touch the bridge, Shepherd says the DOT’s construction delay is great news. She wants her small spot in paradise to stay just like it is.

“It’s a little village that’s been here forever,” she said. “It’s one of the last working fishing villages still around.”