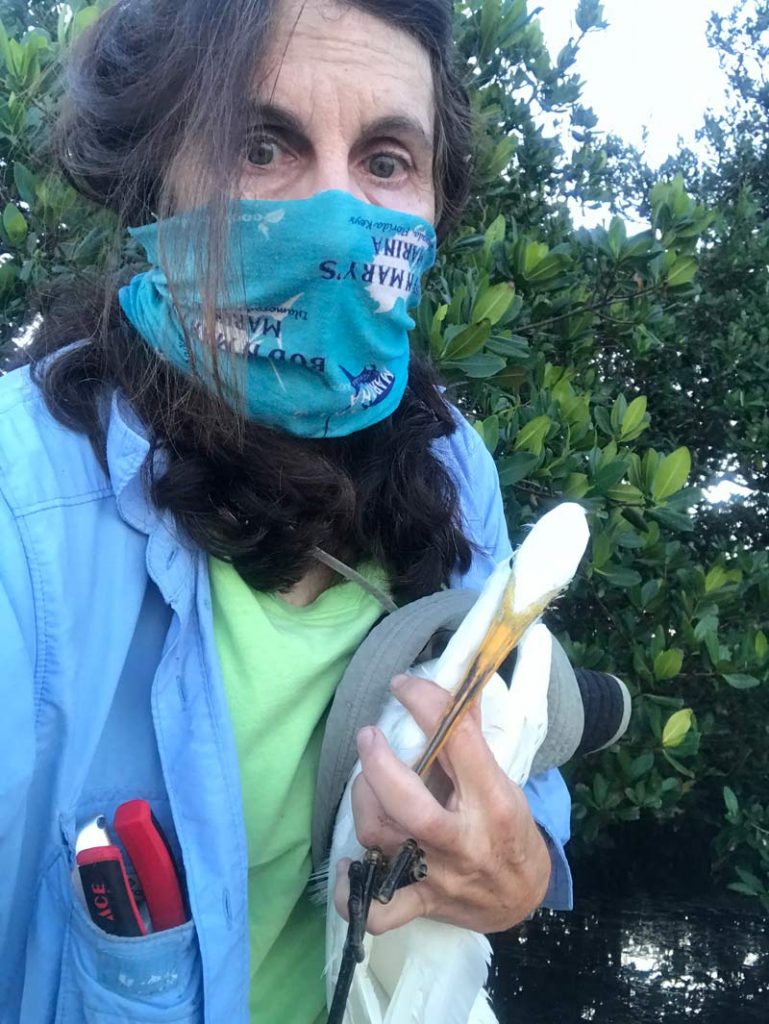 Jeanette Edwards holds a pelican she freed in July from entanglement in a Palma Sola Bay rookery near her home. Edwards is sounding an alarm about increased numbers of sick and dead shorebirds in the bay. 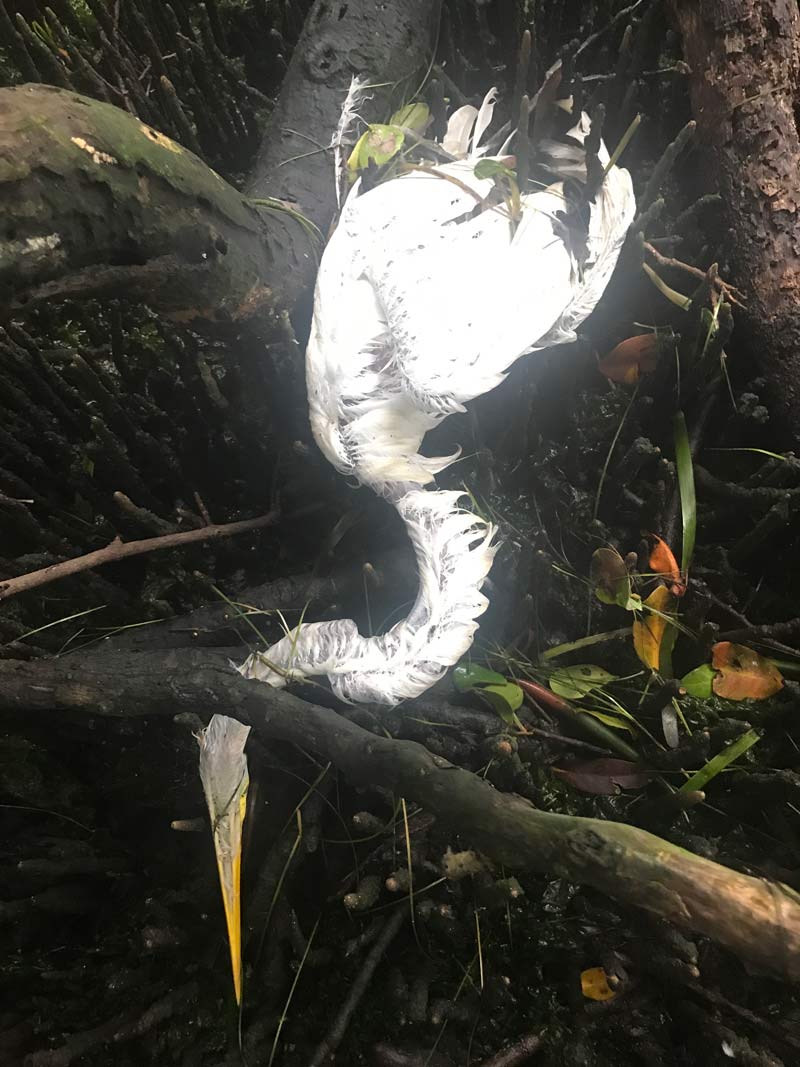 A great white egret is found dead Aug. 16 in the mangroves of a Palma Sola Bay rookery. Islander Courtesy Photos

Jeanette Edwards has a nickname she loves: “The Pelican Lady.”

Years ago, she took on a mission to care for seabirds, with pelicans by far her favorites.

Now Edwards is concerned with what she says is transpiring at a small mangrove conservation zone on Flaming Cay, just a stone’s throw from her home on Palma Sola Bay.

The island is a bird rookery, and lately the birds are dying at an alarming rate, according to Edwards.

She wants to know what is killing the birds.

“It has to be something toxic,” Edwards told The Islander Aug. 21. “There is no fishing line entanglement or gear, no blood or wounds. I just find them dead in the branches or floating in the water nearby.”

As of Aug. 21, Edwards had retrieved 21 dead birds from the rookery since January. She found four dead birds Aug. 6-16.

Another 22 birds were rescued and transported to the Seaside Seabird Sanctuary in Indian Shores for care, though some of those birds also died.

Those numbers are considerably higher than past years.

In 2016, Edwards retrieved four dead birds from the rookery and saved another nine that were sickened.

In 2017, eight dead birds were found and 24 were taken to Seabird for rehab.

“I’ve found sick ones on the ground, or up in the branches. The pelicans can’t hold their heads up. All of the birds seem to become paralyzed and their feet curl up,” Edwards said.

The dead birds also were taken to the Indian Shores sanctuary to be collected for necropsies by the Florida Fish and Wildlife Conservation Commission.

As of Aug. 23, only one tissue sampling returned a determination: salmonella, bacteria that sickens birds that take in food or water contaminated by feces from humans, as well as the wildlife.

Veronica Guzman-Bargas works on the wildlife health team at the FWC, which is conducting the necropsies and tests on the dead birds.

She told The Islander that other tissue samples were sent for testing Aug. 5, but it may be a month or more before the FWC has results.

She also said it is not uncommon for young birds to die from salmonella.

On Aug. 15, the Florida Department of Health issued the second no-swim advisory for Palma Sola Bay in just over 30 days for the south causeway beach after finding an elevated level of a different bacteria, enterococci.

That bacteria also can be associated with the presence of feces from humans or animals.

The no-swim advisory was lifted Aug. 21, after “bacteria counts dropped to acceptable levels,” according to a news release from the health department.

Asked about birds dying in Palma Sola Bay, Department of Health environmental manager Tom Larkin said he was unaware of the problem in an Aug. 21 email to The Islander.

“The FWC investigates mortality events involving wild bird populations,” he wrote. “If the dead shorebirds are found to be impacted by avian influenza or other arbovirus, the health department would be contacted and we would be involved,” Larkin said.

Meanwhile, Edwards worries for the birds she monitors, and for people and pets who go in the bay.

“I see what’s happening to the birds. I see people swimming, fishing, kids, dogs, people eating the fish they catch. It all concerns me,” she said.

Edwards said she was relieved to find no sick or dead birds on a kayak trek to the rookery Aug. 20.

But what will she find on her next outing?

“I thought 2018 was horrific with all the birds that died from the red tide,” Edwards said. “But we only had 11 total and 29 rescued for the year. We’re already ahead of that with four months to go.”