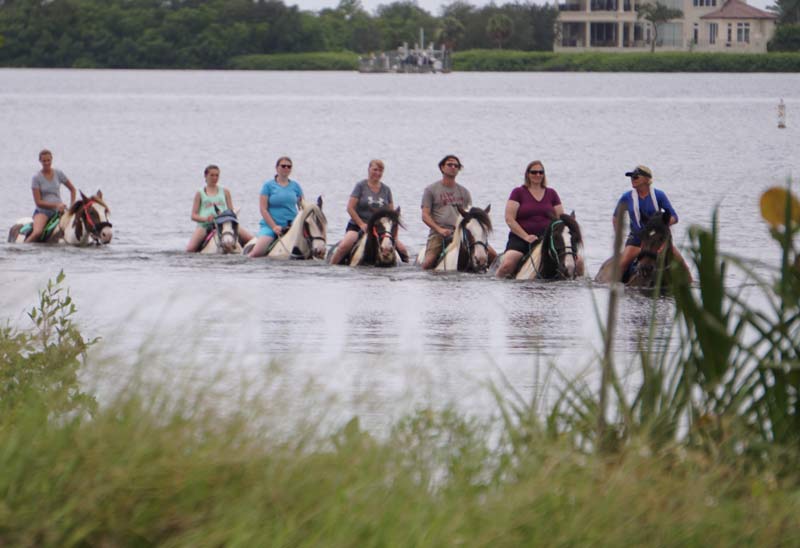 A horseriding attraction operates on the north side of Palma Sola Bay Manatee Avenue. Horses are permitted on the state-owned right of way, where the city of Bradenton lacks regulations. Islander Photos: Kathy Prucnell 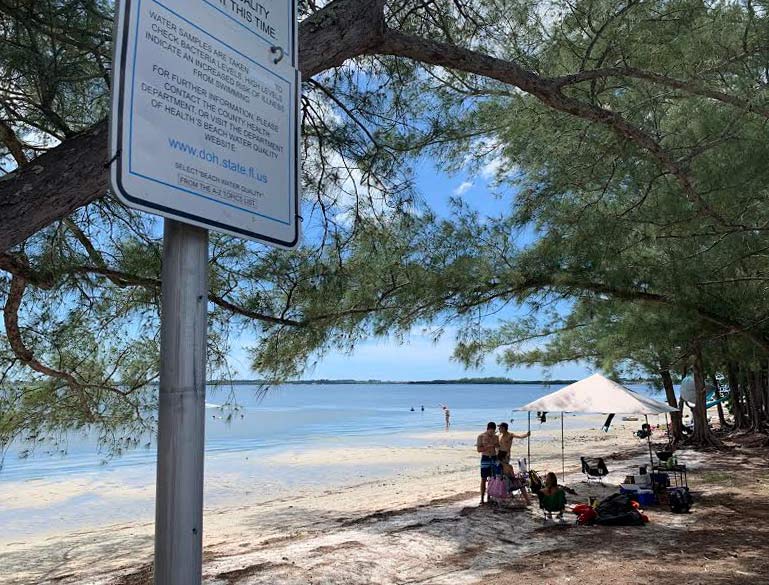 An advisory was lifted for the south side of the Palma Sola Causeway and beachgoers enjoyed the waters Aug. 28.

Dead birds are drawing the attention of wildlife professionals.

Necropsies on an egret and another ibis were pending, with results not expected for at least a month, FWC communications director Kelly Richmond said in an Aug. 29 email.

Salmonella can be contracted by consuming food contaminated by animal feces and, according to Richmond, “is not an uncommon cause of death in young birds.”

Edwards, however, considers the number of dead and sick birds in the past two months, as reported Aug. 28 in The Islander, “very scary,” considering her rescue trajectory from 2018 during the red tide when she found 40 impacted birds and 11 birds died.

Florida Fish and Wildlife Research Institute, a research arm of the, is also on it.

“We have received similar reports and are working with our avian veterinarian staff to get more information,” FWRI public information specialist Michelle Kerr said Aug. 29 in an email.

Whatever caused the birds to get sick hasn’t spread to the nearby county-owned Robinson or Perico preserves, however.

Hunsicker said the illness could be a colony disease — contracted by birds living in close proximity.

Meanwhile, the county’s arm of the Florida Department of Health has given the all-clear signal following two no-swim advisories July 17 and Aug. 15. The affected beach access is on the south side of Manatee Avenue West about 1,000 feet west of 81st Street.

“I know it has to do with feces in the water,” Edwards speculated Aug. 28.

Edwards said the bird deaths connect to fecal matter in Palma Sola Bay because she found birds in the past two months “right after” the two no-swimming advisories went into effect. In July, she found six birds dead and rescued nine. She collected four dead birds Aug. 6-16.

While the health department’s testing Aug. 19 and Aug. 26 for enterococci — an indicator for fecal matter — came back within the state and federal safe swimming guidelines, high elevations of the bacteria were present the weeks of July 8 and Aug. 12.

The threshold is 70.05 colony-forming units per 100 milliliters of water sample. Colony-forming refers to bacteria likely to reproduce.

What could have caused the pollution?

In addition to the health department and the FWC, the Florida Department of Environmental Protection is charged with oversight of Palma Sola Bay as part of the Sarasota Bay Estuarine System, a Florida Outstanding Water body.

The DEP monitors the waters to ensure discharges are stopped “as quickly as possible” and to determine corrective actions, spokeswoman Shannon Herbon said in an Aug. 22 email.

Specific to Palma Sola Bay, she said there were no known discharges of sewage in the July-August time frame.

“It’s possible the beach closure was due to fecal coliform from animals,” Herbon added.

As far as sewage spills into Palma Sola Bay, the last recorded spills occurred December 2017-February 2018, when contractors hit sewer lines and more than 6 million gallons of raw sewage spewed through adjacent land into the bay.

The latest significant spill in Palma Sola Bay came from reclaimed water, according to the DEP and Manatee County Utilities Department.

Some 180,000 gallons of treated wastewater was discharged at 3 p.m. Aug. 19 into a storm drain on 59th Street West that flows south and eventually to Palma Sola Bay. MCUD staff stopped the discharge by 6 p.m., determining that Metro Equipment Service Inc. hit a 16-inch reclaimed water main, according to reports.

The reclaimed water is treated “almost to the drinking water standard. … with a little more nitrogen,” said MCUD spokeswoman Amy Pilson but, she added, “We wouldn’t recommend anyone drink it.”

Hunsicker was not happy to hear about the reclaimed water spill into Palma Sola Bay.

“Nobody is talking about those millions of gallons of nitrogen going into Sarasota Bay. We’re not hearing a single word about it because it is reclaimed,” he said, referring to a lack of public complaints.

Ed Straight of Wildlife Inc. said Aug. 28 the Bradenton Beach rescue is caring for two sick pelicans and two laughing gulls, but he believes their illnesses were natural.

A Bayfront Park beach was under a no-swim advisory.

The Florida Department of Health in Manatee County issued the warning Aug. 30 for waters located at the north end of the park at 316 N. Bay Blvd., Anna Maria.

Test results from Aug. 26 and Aug. 28 show elevated levels of enterococci bacteria — an indicator for fecal matter—from water samples taken near the beach, according to DOH advisory.

The advisory will remain in effect until tests results meet the EPA guidelines.

For more information, go online to the DOH website at www.floridahealth.gov and select environmental health and beach water quality tabs or call 941-714-7593.