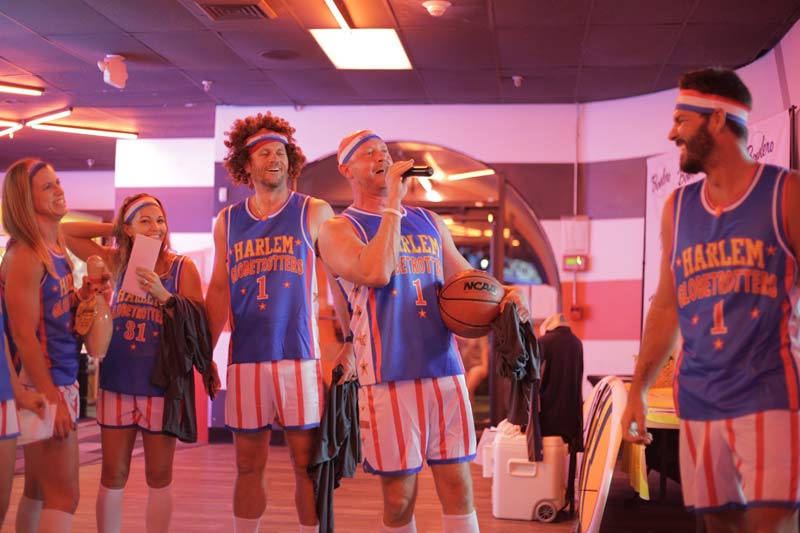 Don Purvis, center, alongside with his Beach House Real Estate team, accepts the prize for best team costumes Sept. 7 for his team’s Harlem Globetrotters outfits at the annual tournament to benefit the Center of Anna Maria Island. Islander Courtesy Photo 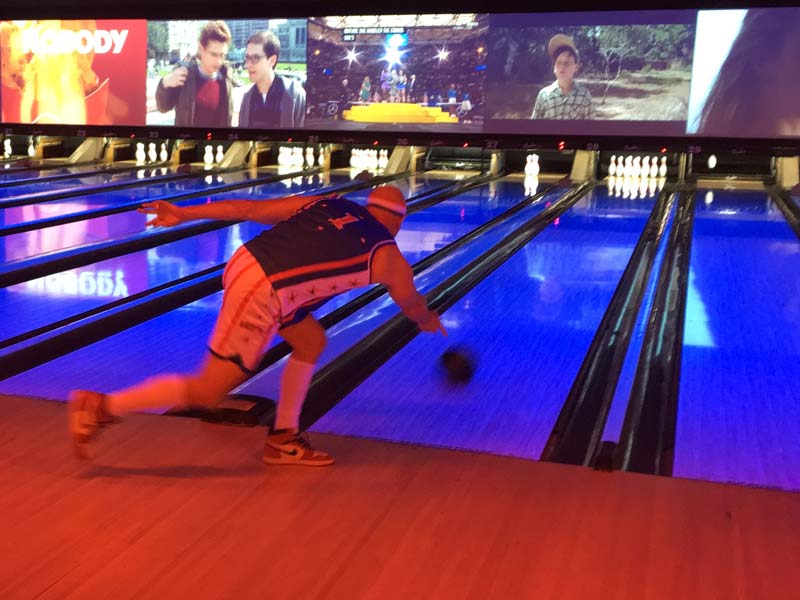 Holmes Beach resident Don Purvis lets it roll in a warmup round at the start of the LaPensee Bowling Tournament at Bowlero Bradenton, 4208 Cortez Road W., to benefit the Center of Anna Maria Island. Islander Photo: Ryan Paice

Wildcard games kicked off Sept. 12 in the playoffs for the adult flag football league at the Center of Anna Maria Island.

The first of the wildcard games saw No. 4 seed Lancaster Design hold on for a 34-33 victory over No. 5 seed Moss Builders behind five touchdown passes from Tim Shaughnessy. Jay Hoffmeister came through with five catches, including three that went for touchdowns in the victory, while Anthony Mannino had an incredible 14 catches — two for touchdowns and a pair of extra points.

The second wildcard game also was a barn burner as No. 3 seed Hashmark Sports held on for a 38-35 victory over No. 6 seed Ugly Grouper.

Games are played at the center, 407 Magnolia Ave., Anna Maria.

The playoff seeds are set after six weeks of action in the indoor adult soccer league at the center.

Games are played in the gym.

Progressive Cabinetry is on top with a 5-1 record, followed by No. 2 seed Moss Builders at 4-2, earning the teams a bye into the semifinals for the strong finish.

Slim’s Place closed out the regular season with a much-needed 17-12 victory over Moss Builders behind nine goals and two assists from Joey Hutchinson. Jose Caseras added five goals for Slim’s, which also received two goals from Clancy Vaughn and 20 saves from goalie Rob Marshall in the victory.

Juan Carlos scored seven goals and had an assist to lead Moss, which also received three goals from Miguel Ajoy and a goal from Pepe Chavaree. Omar Polar added three assists and 11 saves in goal, while David Greene also came through with 11 saves in the loss.

Progressive Cabinetry earned an 11-8 victory over Gulfview in the second match of the night behind four goals and an assist from Ken Roman and three goals and 13 saves from Diego Felipe. Jessica Williams chipped in two goals and an assist and Murat Akay added a goal and an assist. Steve Oelfke completed the scoring with a goal, while also adding eight saves in the victory.

The final match of the evening saw Sato hold on for a 9-6 victory over Ugly Grouper behind four goals from Ben Sato and three goals from Adam Bujarski. Ryan Moss chipped in with a goal and two assists and Jason Sato had a goal. Mark Rudacille helped preserve the victory with 24 saves between the pipes.

Connor Bystrom’s hat trick and two goals from Yuri Pereira led Ugly Grouper, which also received a goal from Olaf Krause and 27 saves from John Haggerty in the loss.

Horseshoe action at the Anna Maria City Hall horseshoe pits was short and sweet. There were two outright champs crowned following pool play at the Sept. 11 and Sept. 14 games.

Huyghe was back in the winner’s circle on the Saturday, this time partnering with Bob Heiger to forge the only 3-0 record and earn the day’s championship which was Huyghe’s third victory in a row.

For the first time in weeks, the rain held off and the Key Royale Club hosted a full slate of golf action.

The action teed off Sept. 9 with the men’s nine-hole modified-Stableford system match won by Dale Miller at plus-4. Alan Tripp scored one point back for second place.

The women got out on the course for a nine-hole individual-low-net match in two flights.

Flight A saw Jana Samuels and Ellen Boin match even-par 32s and finish in a tie for first place.

Terry Westby captured first place in Flight B with a 2-under-par 30, four strokes ahead of second-place finisher Janet Razze.

The men were back on the course Sept. 12 for a nine-hole scramble. The team of Warren Boin, Bill MacMillan, Art McMillan and Blake Ress combined on a 5-under-par 27 to earn clubhouse bragging rights.

Who knew bowling could bring in big bucks?

Almost 300 people filled 54 of Bowlero Bradenton’s lanes Sept. 7 for a bowling tournament to benefit the Center of Anna Maria Island. Executive director Chris Culhane estimated in a Sept. 9 email to The Islander that the tournament raised more than $18,000 for the center, before expenses. The event was sponsored by LaPensee Plumbing, Pools & Air.

Culhane said the event was “the smoothest and most successful LaPensee Plumbing, Pools & Air bowling tournament to date.”

Joey Newell, rolling for the Salty Dolphin Tours team, had the highest men’s score with 596, while Stephanie Borkowski scored highest among women at 457. Eleven-year-old Kieran Cloutier won for highest score among the kids, rolling a 293.

Patrons also bid on silent auction items and raffle prizes, including a choice between a paddle board from Beach Bums Island Attitude or a grill from Rice’s Appliance, and several baskets of prizes from local businesses.

The center also awarded $570 to Lauren Collins for the 50/50 raffle and she donated her prize winnings to the nonprofit.
— Ryan Paice