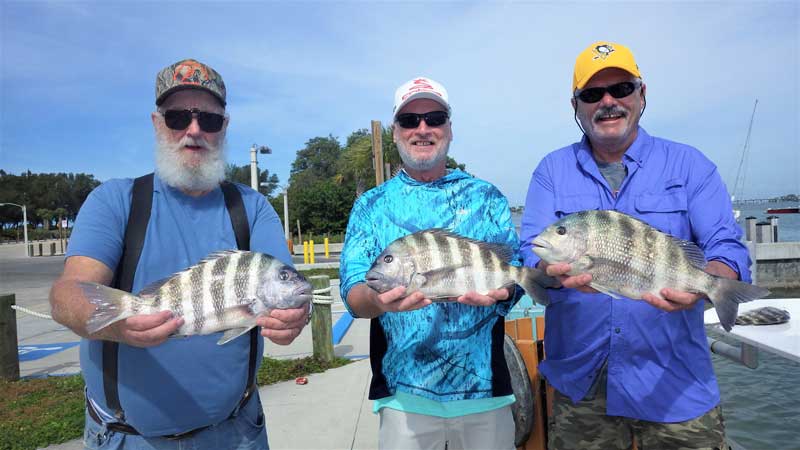 Homer Frampton of Bradenton and Bob Perry and Kevin Goodrich, both visiting from Ohio, are bringing home some big sheepshead. The trio fished offshore and nearshore the morning of Feb. 11, using shrimp for bait, on a guided charter with Capt. Warren Girle. 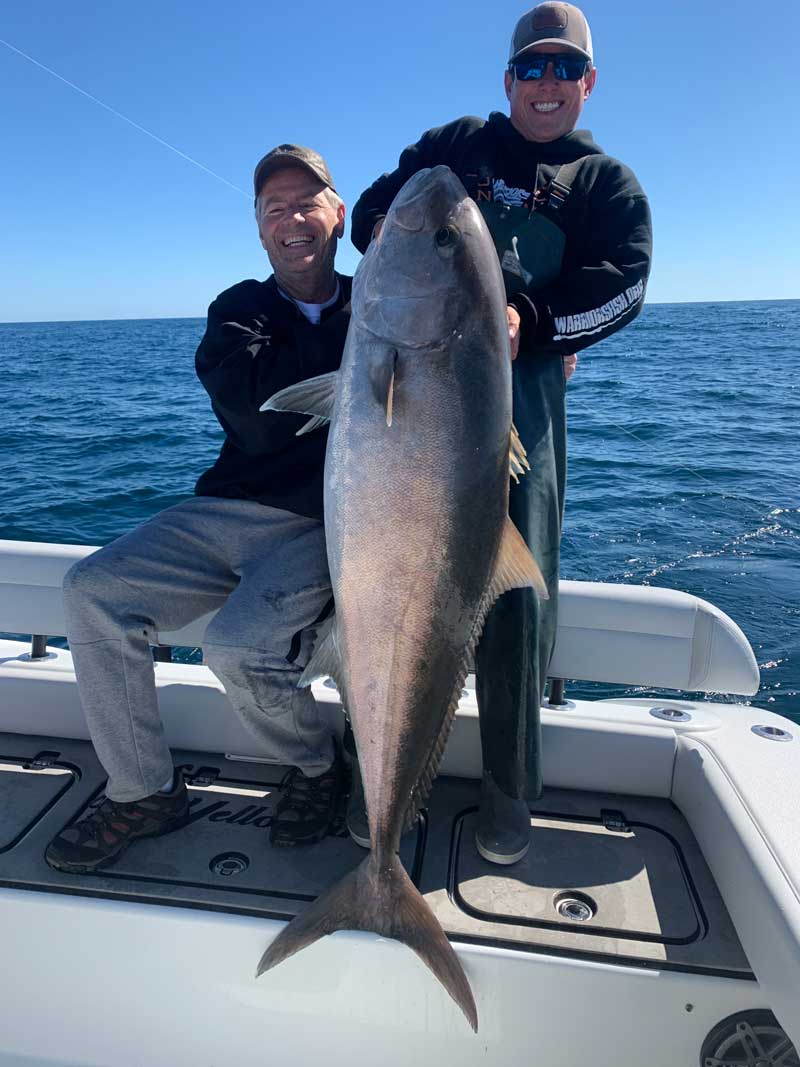 Keith Stroobants, left, visiting from Wisconsin, shows off a giant amberjack Feb. 3. He caught the 90-pound fish after a fight “he’ll never forget,” according to his guide, Capt. Jason Stock. “My mate, Greiner Hobbs, is holding up the sea beast because Keith’s arms were too tired!” Running up to 125 pounds, amberjacks have been “crowd-pleasers this winter, for sure.” Stock said.

Fishing around Anna Maria Island remains good for targeting sheepshead, as greater numbers and bigger fish are showing up daily.

Fishing structure — piers, bridges, wrecks, reefs and rock piles — are providing limits of fish for determined anglers using shrimp as bait. If you run across finicky fish, tantalize them with a fiddler crab or sand flea.

Moving to the grass flats is proving quite good for spotted seatrout. Although these fish are catch-and-release, it’s worthwhile to spend a couple of hours drifting over your favorite grass flat and casting some soft plastics on a jig head.

While doing this, you may be rewarded with a pompano bite here and there, as well as some mackerel, ladyfish and bluefish.

Fishing shrimp along the beaches is working well for whiting, black drum and flounder. The same applies while fishing at the local piers.

Moving offshore, big amberjack seem to be a mainstay for anglers looking to bend a rod.

Also offshore, you can expect red grouper and many different and delicious snappers, including lane, mangrove and yellowtail.

On my own Southernaire fishing charters, I’ve got my clients hooking into numerous sheepshead. Fishing over structure — reefs and wrecks — is resulting in limits of sheepies, with some topping 5 pounds. When targeting the sheepshead, we’ve also got mangrove snapper and Key West grunts showing up on the hook.

While fishing around docks with live shrimp as bait, we’re hooking into numerous black drum, flounder and catch-and-release redfish.

Lastly, during the higher stages of the tide, we’re drifting and jigging over deep grass flats. Casting a jig head combined with a soft plastic is resulting in many catch-and-release trout for my clients, as well as ladyfish, jack crevalle and a few pompano.

Capt. Aaron Lowman is putting anglers on sheepshead around nearshore structure in the Gulf of Mexico. Using live shrimp on a knocker rig is luring the convict fish to the hook. While targeting sheepies in these areas, the fishers also are hooking some mangrove snapper and Key West grunts.

Fishing deep grass flats with soft plastics is resulting in good numbers of spotted seatrout, as well as pompano. Using whole live shrimp on a weighted rig around docks is producing action, especially on the black drum and catch-and-release redfish.

Lastly, casting live shrimp around docks and canals is yielding black drum, sheepshead and some catch-and-release snook and reds.

Capt. Jason Stock is heading offshore in search of big amberjack. The week of Feb. 9, amberjack catches were topping 90-pounds. Live pinfish as bait are attracting these aggressive fish to bite.

Also, while offshore, Stock’s anglers are hooking into goliath grouper weighing up to 200 pounds. The goliath fish make for great trophy photos.

Fishing inshore inside Tampa Bay is producing action on sheepshead and snappers for Stock’s anglers.

Capt. David White of Anna Maria Charters is catching his share of sheepshead while fishing in Tampa Bay and in the Gulf of Mexico. Using live shrimp as bait and working around structure is producing a steady bite. White also is putting anglers on black drum and whiting along the beaches, with pompano in the mix.

Jim Malfese at the R&R Pier says sheepshead are making a good showing. Pier fishers using live shrimp as bait are catching plenty of sheepies in the 12-inch range with larger fish sporadically mixed in.

As the season progresses, Malfese anticipates seeing an increased number of bigger sheepies taking up residence under the pier. Pier fishers bating with shrimp also are hooking into black drum, whiting, flounder and some catch-and-release redfish.