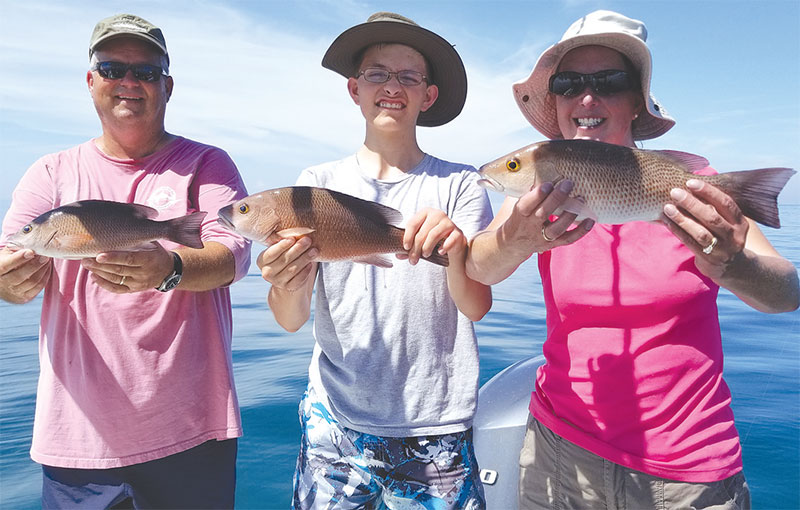 John, Cody and Jennifer Konek, visiting from Virginia, show off the mangrove snapper they caught on shiners Sept. 9 on a family charter with Capt. Warren Girle. The family, which returns every year, planned a fish dinner. 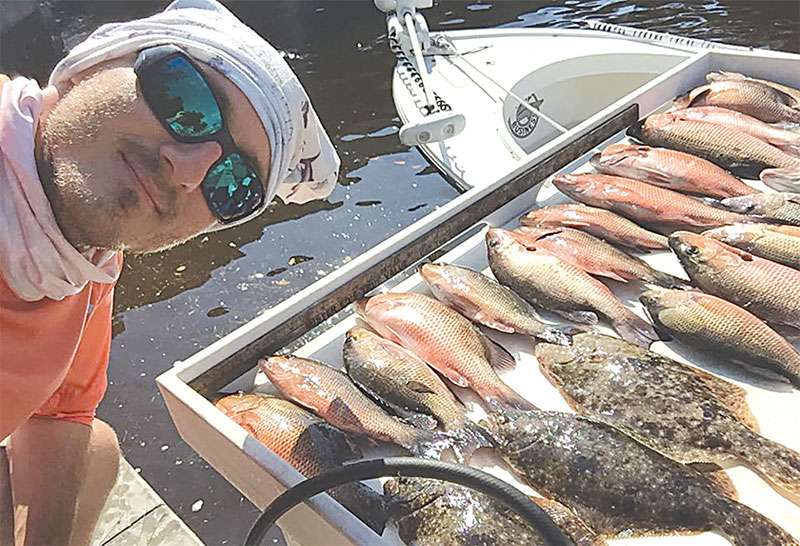 Brandon Frederick looks over the mangrove snapper and flounder waiting on the fillet table after a successful day of fishing Sept. 11 on a guided trip with Capt. Rick Gross of Fishy Business and Brandon Gross.

Fishing around Anna Maria remains consistently good inshore and nearshore. Fishing along the beaches is especially good for catch-and-release snook.

Walking the shoreline in the morning or evening when the seas are calm is a great opportunity to some sight-casting for snook — a typically back-country species.

For a hookup, an assortment of baits will work. Live shiners are the best, although sometimes using small whiting, mojarras or pinfish can be productive.

If you’re not into catching bait, you can try artificials. One of my preferences is the DOA Terroreyz. This small, soft plastic mimics a shiner as you jig it through the trough in the shallow waters by the shore. I’ve had many occasions when the snook couldn’t seem to get enough of my artificials.

Other lures that work well are the Yo-Zuri pins minnow or crystal minnow. And, if you’re a minimalist, the old faithful white bucktail jig sometimes will get the job done.

Lastly, for you fly enthusiasts, it really doesn’t get much better than this. Sight-casting in clear water to 20-40 inch snook ranks at the top for any fly fisher.

On my Southernaire charters, I’m working the deeper grass areas for catch-and-release spotted seatrout. Free-lining live shiners over flats in 6-8 feet of water is working well to attract a bite. Mixed in with the trout are Spanish mackerel, jack crevalle, ladyfish and even some blue runners, which adds variety to the bite. Not to mention, all of these fish listed are fully capable of putting a good bend on the rod and even pulling some drag.

Snook fishing around the mangrove shorelines is proving to be tops for sport anglers. Most catches are  20-30 inches. While targeting snook, I’m seeing some catch-and-release redfish on the hook — always a welcome sight.

Snook and redfish remain closed to harvest to help recoup from last summer’s red tide. The closure helps these local favorites to spawn, which will rebuild their numbers after the fish kills.

Capt. Aaron Lowman is targeting catch-and-release snook on his charters along the mangrove shorelines of Tampa Bay and the adjacent waters. Chumming heavily with live shiners is drawing the fish from their hiding places under the mangroves, which makes it easier to cast to feeding fish.

Catch-and-release redfish also are present in these areas, which adds some variety to the bite. Moving out to deeper grass flats in open water is resulting in catch-and-release trout. Mixed in with the trout are ladyfish and mackerel.

Jim Malfese at the Rod & Reel Pier is seeing an abundance of migratory species being caught. Spanish mackerel, jack crevalle, blue runners and ladyfish are being caught when the bait schools are present. Small white or pink jigs are luring these fish to the hook. Silver spoons are a good bet.

Fishing with live shiners as bait is another sure way to catch these high-speed fish. Just remember to use a longshank hook, as most of these fish are toothy — especially the Spanish mackerel.

Fishers opting to use live shrimp are reeling in a fair amount of mangrove snapper, while casting a weighted rig under the pier also is yielding success. While baiting shrimp, pier anglers are hooking into catch-and-release redfish and an occasional snook.

For those strictly targeting the linesiders, larger baits, such as pinfish, are working well.

Meanwhile, Capt. Warren Girle is working the nearshore reefs in the Gulf of Mexico on days when the winds are calm.

Using live shiners as bait, enhanced with a 1/2-ounce knocker rig is yielding mangrove snapper for Girle’s clients. Snapper 12-15 inches are readily taking the live shiners offerings soon after they reach the sandy bottom around the reef.

While targeting snapper Girle is happy to see that the action is piquing the curiosity of some cobia, which are taking up residence around the reefs. Cobia 35-40 inches are being taken in this fashion.

Moving inshore, Girle is finding catch-and-release redfish and spotted seatrout on the flats of Tampa Bay. Both species are being taken on either soft plastics or live bait offerings — live shiners and pinfish.