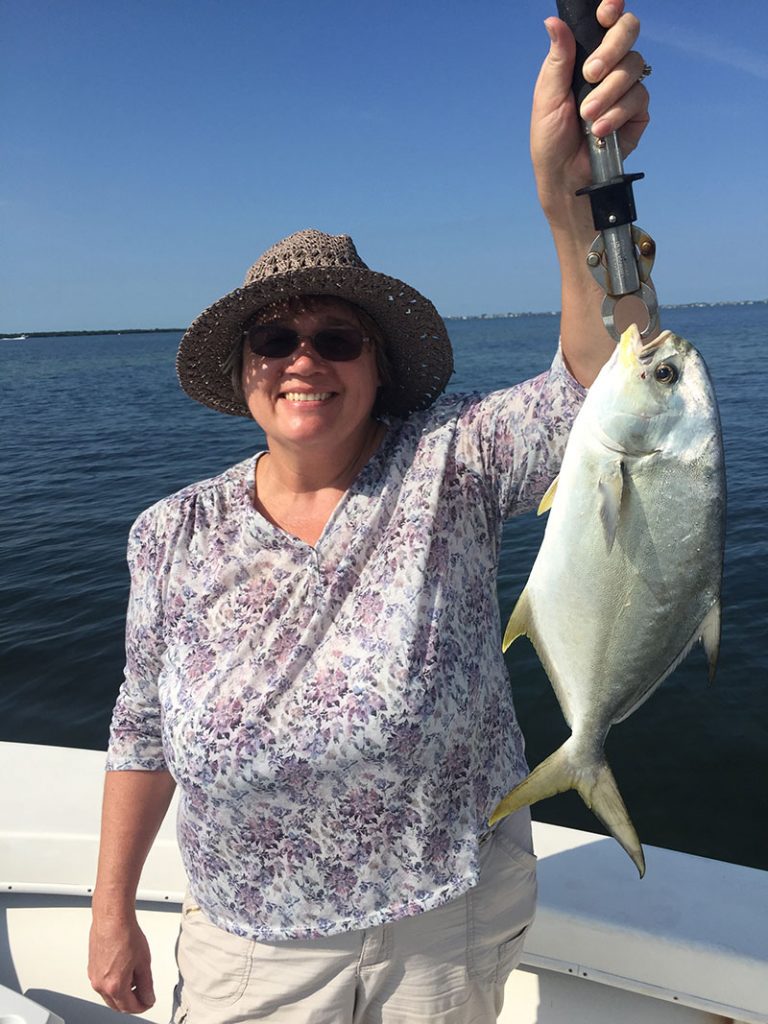 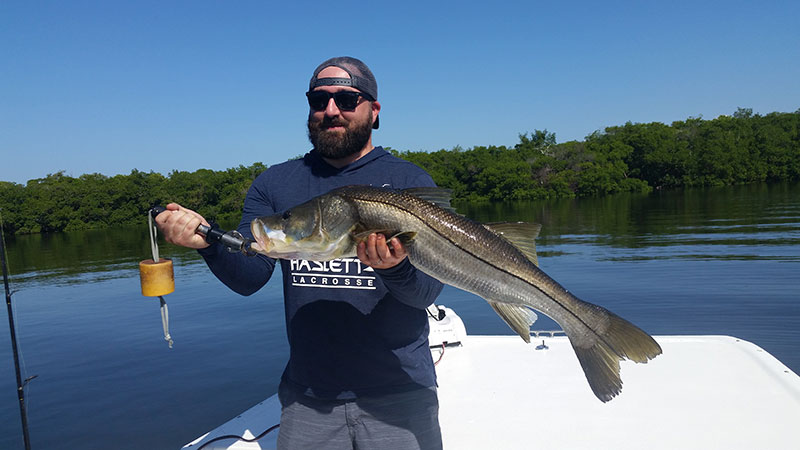 Jake Murphy of DeWitt, Michigan, shows off a 37-inch snook he caught and released Sept. 25 on a charter with Capt. Aaron Lowman. The fish ate a live shiner free-lined on 20# fluorocarbon leader. Lowman said Murphy and wife Sarah caught and released more than a dozen linesiders, and also released some nice seatrout. 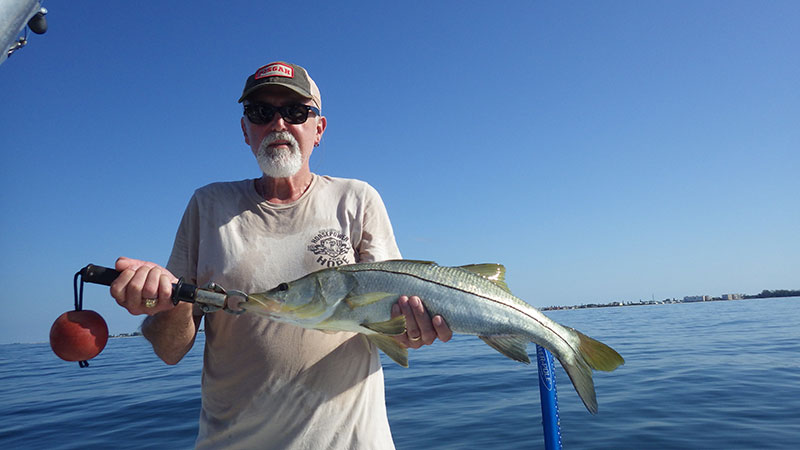 Kathi Johnson and husband Brian from Belleville, Illinois, fished inshore and nearshore Sept. 24 — their first time fishing saltwater. They were rewarded with mackerel and snook using shiners. All fish were released. They were guided by Capt. Warren Girle.

If you haven’t noticed, there’s a touch of fall in the air — at least on the water surrounding Anna Maria Island.

A slight drop in the water temperature, drier air and cooler nights and mornings prompt us to want more of the fall weather. And prompting the fish to stir, too.

Snook are sensing this change as they finish their spawn along the beaches and migrate to the flats. I’m seeing more and more snook showing up in their staging areas to fatten up for the winter. And, with the plethora of bait that is in Tampa Bay right now, that won’t be a problem.

Redfish are making a showing along the mangrove shorelines of Tampa Bay. Areas where oyster bars exist are always worth a look-see, but don’t exclude docks and piers.

Along the beaches and in Tampa Bay, schools of Spanish mackerel, jack crevalle and ladyfish are cashing in on the abundance of bait. Look for diving shorebirds and chances are you’ll find some action on at least one of these species — if not all.

And, if you’re into bottom fishing, mangrove snapper and gag grouper are being caught with regularity in Tampa Bay. For the snapper, fishing structure such as reefs, wrecks and bridges is productive. I am seeing them on the flats, although catching keepers with any consistency is challenging.

As for the groupers, trolling with deep-diving lipped plugs works. If you’re not into trolling, free-lining a pinfish around the artificial reefs will work.

On my Southernaire charters, I’m targeting catch-and-release snook on the grass flats and along the mangrove shorelines, which are never-ending in our area. The numbers of these fish are on the rise on the flats — as they approach the tail-end of their spawn. They’re here and they’re hungry.

I am seeing quite a few catch-and-release reds in the mix, which my clients enjoy.

Catch-and-release trout are coming on strong. Look for the bait schools on the flats in 6-8 feet of water and you should find trout.

Lastly, I’m finding pompano schooling in some of the deeper grass areas. Jigging with Docs Goofy jig works well for this bite.

Capt. Aaron Lowman is targeting catch-and-release redfish and snook along the mangrove shorelines of southern Tampa Bay. Lowman reports good numbers of snook coming back on the flats after finishing their spawn along the beaches and passes.

As for the catch-and-release reds, Lowman is putting clients on schools containing a dozen or more fish along mangrove edges where oyster bars exist.

Catch-and-release trout are being hooked with regularity on deeper grass flats and sandy potholes.

Lastly, Lowman says fishing structure both in Tampa Bay and in the Gulf of Mexico is producing Spanish mackerel, mangrove snapper and some gag grouper.

Jim Malfese at the Rod & Reel Pier is saying Spanish mackerel and jack crevalle are being caught with regularity. Casting silver spoons or small jigs is resulting in hook ups from these highly aggressive fish.

You may encounter ladyfish — equally fierce on light spinning tackle.

Pier fishers opting to use live shrimp are having good results. Flipping shrimp under the pier is luring mangrove snapper and catch-and-release red fish to bite. Using a weighted rig is recommended to keep the shrimp secure on the bottom, where it can easily be inhaled.

Capt. Warren Girle is heading out into the Gulf of Mexico to concentrate on areas such as artificial reefs, ledges and hard bottom, which is proving to yield a variety of species for Girle’s clients.

Macks, jack crevalle, and mangrove snapper are the most apparent in these areas. For the macks and jacks, Girle has clients free-lining live shiners over structure. The aid of a 1/2-ounce egg sinker is proving effective as the snapper are waiting down toward the bottom of the water column around the structure. As a bonus, Girle’s clients are hooking into large snook in their nearshore sanctuary around structure.