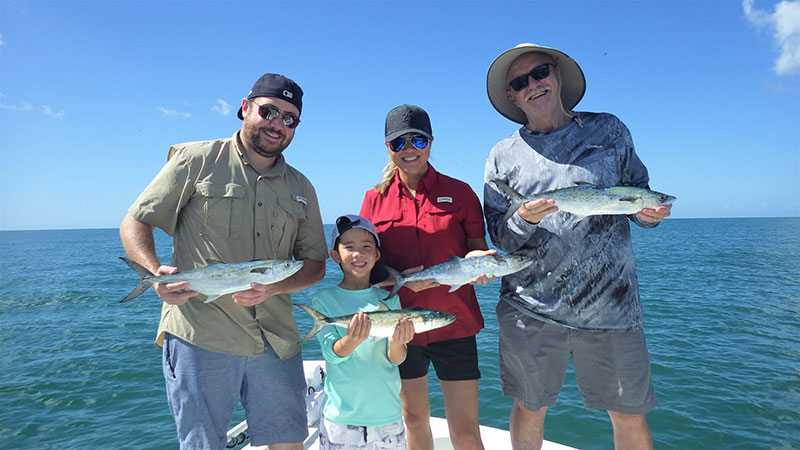 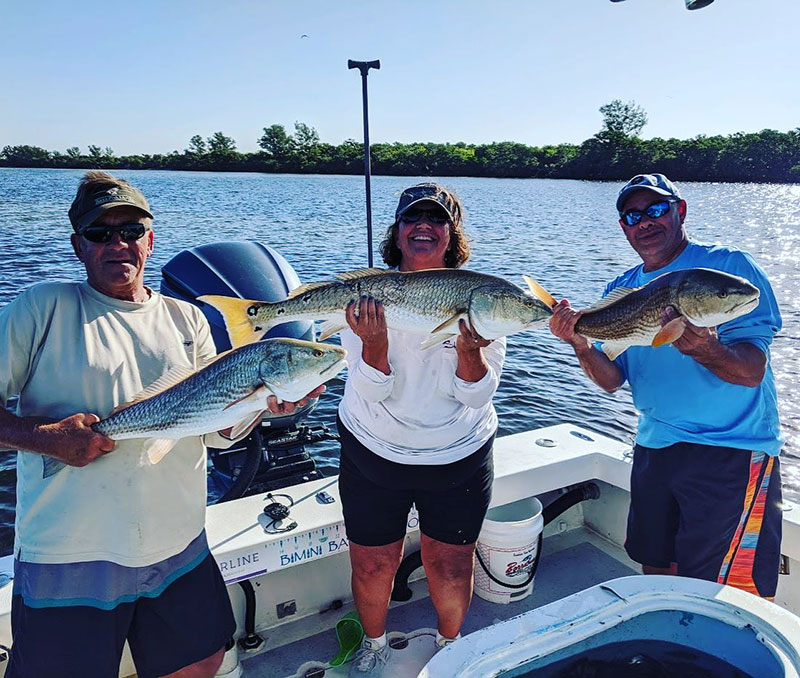 The Varzinos — Louis, Kathy and Michael — show off a triple hookup of redfish caught Oct. 3 on a fishing trip with Capt. Will Osborn. 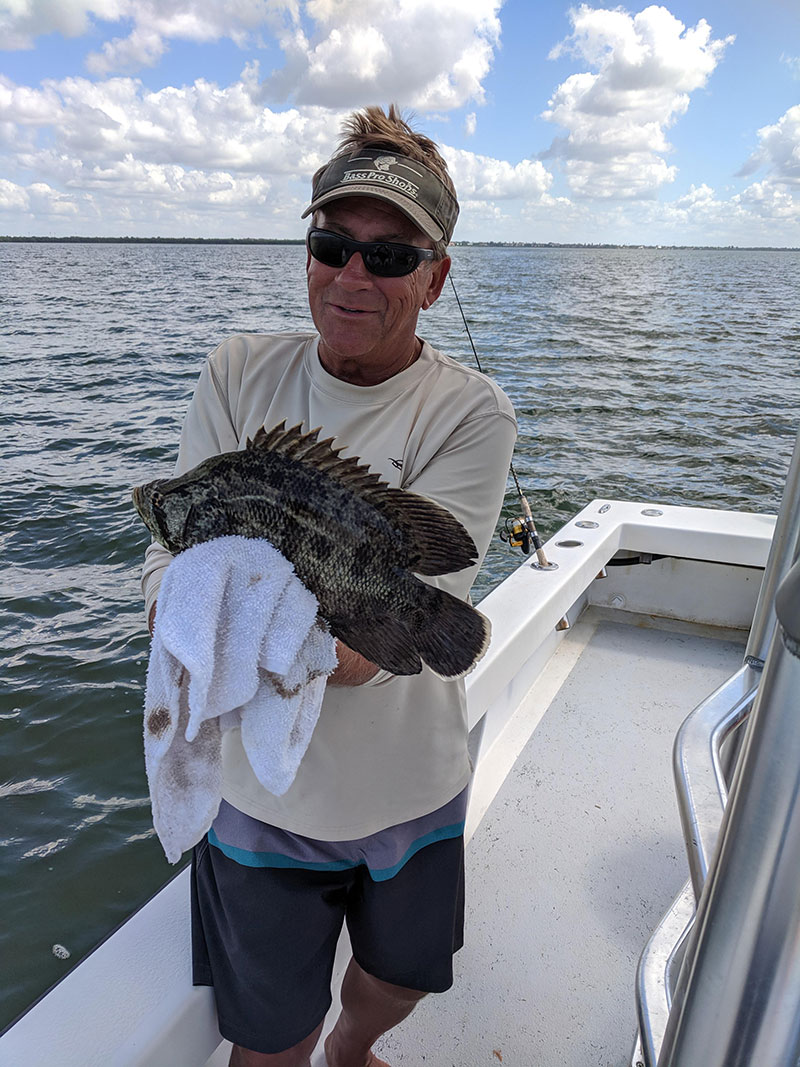 Louis Varzinos shows off a tripletail he caught Oct. 3. 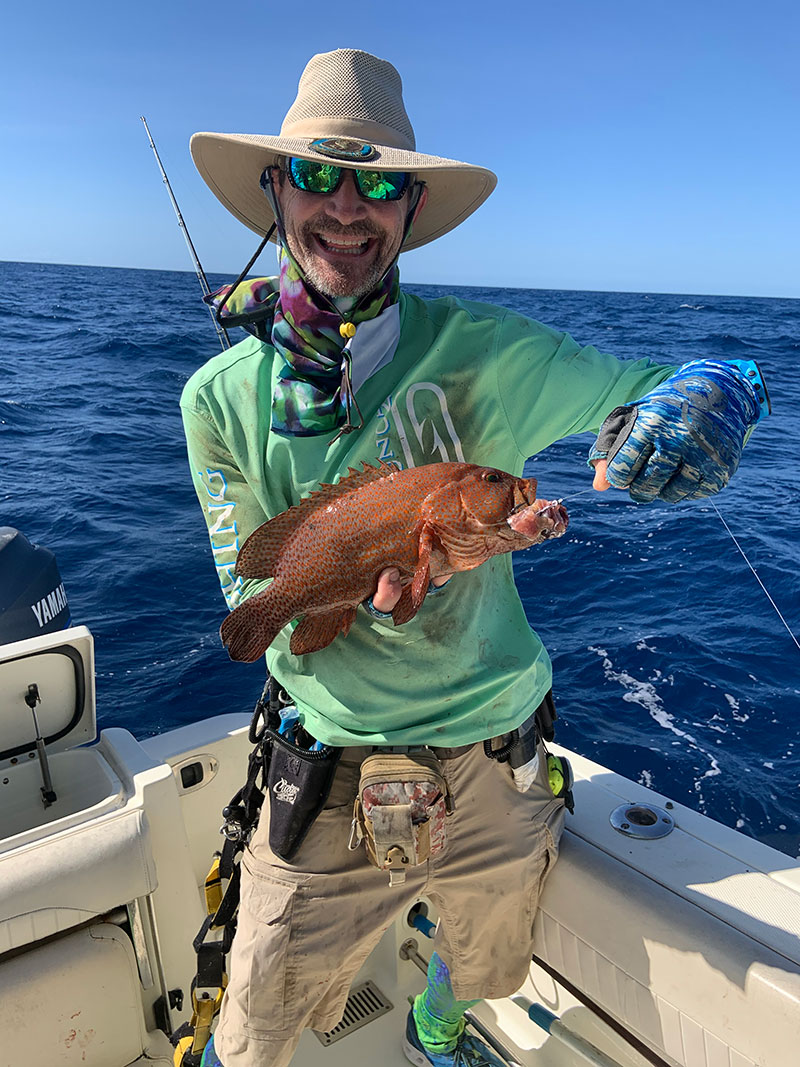 Believe it or not, says angler Roger Danziger, he caught a “pretty large graysby grouper” Oct. 13 on dead bait 52 miles off Holmes Beach in 165 feet of water.

Fishing the inshore waters around Anna Maria Island continues to improve as we move through autumn.

Large quantities of baitfish are invading Tampa Bay and the Gulf beaches, putting many of predatory species on the prowl.

The most prominent of the predatory fish is the Spanish mackerel. Joined by its cohorts, jack crevalle and the blue runner, this trio can provide excellent action on light spinning tackle. All are formidable adversaries on the hook, displaying drag-screaming runs, a lot of thrashing and head-shaking and a relentless battle to the end. What’s better? These fish can be targeted from a variety of places.

Whether working the beaches, fishing from piers or a boat or wading the flats, you can find these fish.

Preferred attractants include an assortment of artificials, as well as live baits.

Casting a small jig, white, chartreuse or hot pink, is popular, but second to the old reliable silver spoon. Casting lures among the bait schools followed by a quick retrieve will lead to a hook up — if the fish are present.

Here’s an important bit of advice: Carry a number of lures because the mack’s teeth are sharp like razors. You’re going to lose some gear. That goes along with mackerel fishing.

As far as using live bait, shiners, Spanish sardines and shrimp will work. Typically, you want to combine these baits with a long shank hook. This adds insurance against those teeth. But be ready to do some rigging.

And, with all of this talk about getting cut off, the logical solution that comes to mind is the use of a wire leader. Typically, the addition of the wire leader will curtail a fish from taking your bait offering. The fish will see the wire and immediately turn away from your bait. They might spend more time re-tying hooks, but I guarantee they’ll get more time at the fillet table.

On my Southernaire charters, I’m putting some time into the mackerel bite. I’m finding good action over structure in Tampa Bay, as well as on a few deeper grass flats. While fishing the structure, I’m seeing solid mackerel action with a blend of mangrove snapper and ladyfish thrown in. On the deeper grass areas, the mix is 50/50 mackerel and spotted seatrout, but the trout are release-only.

Moving shallower along the mangrove shores of Tampa Bay and Anna Maria Sound, I’m finding consistent action on catch-and-release snook. Fishing during high tides is slightly challenging, as most linesiders are hiding among the mangrove roots, which requires skill to present the bait. If the bait doesn’t land under the bushes, you might as well forget about getting a bite.

Luckily, I have a few tricks, such as chumming with live baits to lure the snook out of their hiding places and into casting range. While targeting “root bound” snook, I’m seeing a decent amount of catch-and-release redfish being hooked and reeled to the boat.

Capt. Aaron Lowman is targeting mangrove snapper and Spanish mackerel around structure in the Gulf of Mexico and Tampa Bay. For the macks, he says free-lining live shiners works well. This method also is working some days for mangrove snapper. When the snapper won’t take a free-lined bait, Lowman adds weight to the rig to get the bait down by the structure. Gag grouper also are being taken in this fashion.

Fishing the flats is working well for Lowman and his sport-fishing clients. The top trio of catch-and-release species — snook, redfish and trout — are being caught consistently. Heavy chumming is getting these fish in the feeding mood.

Capt. David White of Anna Maria Charters is targeting snapper by working around offshore ledges in the Gulf of Mexico. Yellowtail, lane and mangrove snapper are being taken with ease on White’s charters. Bottom fishing with live shiners or frozen baits — squid and sardines — is triggering the bite. Mixed in is an occasional red grouper.

Moving inshore, White is putting clients on plenty of mangrove snapper and Spanish mackerel on the nearshore reefs of Tampa Bay. On the flats, White boasts that catch-and-release snook and redfish are readily available.

Capt. Jason Stock is on patrol for kingfish in the Gulf of Mexico. Targeting offshore structure — reefs, wrecks and hard bottom — where large bait schools are present is proving successful. While targeting kings, Stock is seeing an occasional school of mahi mahi. Bottom fishing offshore is quite productive, with catches of yellowtail and mangrove snapper, as well as some almaco jack. Lastly, for thrills, Stock is letting his clients drop a line among the goliath grouper. For those successful at such a venture, sore arms and great photo opportunities are in store.

Jim Malfese at the Rod & Reel Pier is seeing numerous catch-and-release bull redfish coming to the dock. Anglers using live shrimp as bait combined with a bottom rig are hooking into these over-slot reds by casting under the pier. Stout gear is required if you plan on landing one of these redfish, which are 30-40 inches. “Fese” says large catch-and-release snook are being caught between redfish bites. Anglers with lighter tackle are casting jigs and spoons out from the pier to cash in on the Spanish mackerel bite, with jack crevalle, ladyfish and blue runners in the mix.

Lastly, mangrove snapper are being caught with regularity on live shrimp cast under the pier. Light fluorocarbon leader and small hooks are smart choices when targeting these wary fish.

Capt. Warren Girle is finding a good Spanish mackerel bite along the beaches of Anna Maria. In depths of 20-80 feet, Girle is spotting bait schools and shorebirds — terns and seagulls — to locate the bite. Casting free-lined live shiners combined with a long shank hook around these bait schools is resulting in numerous hookups on 18- to 24-inch macks. Although the bite is primarily from mackerel, jack crevalle and blue runners are in the mix.

Moving inland to the mangrove shorelines of Tampa Bay, Girle is putting sport fishers on catch-and-release snook and redfish. Both are being cooperative when chummed with live shiners.

The FWC in an Oct. 7 news release stated that there are some new regulations for recreational harvesters.

People 16 and older who trap stone crabs must register and attach the assigned numbers to their traps before placing them in the water.

To register, a person must first have a fishing license, available online at gooutdoorsflorida.com, where a recreational stone crab trap registration can be added.

According to the release, the no-cost registration allows the FWC to collect information about recreational fisheries for stock analysis and management.