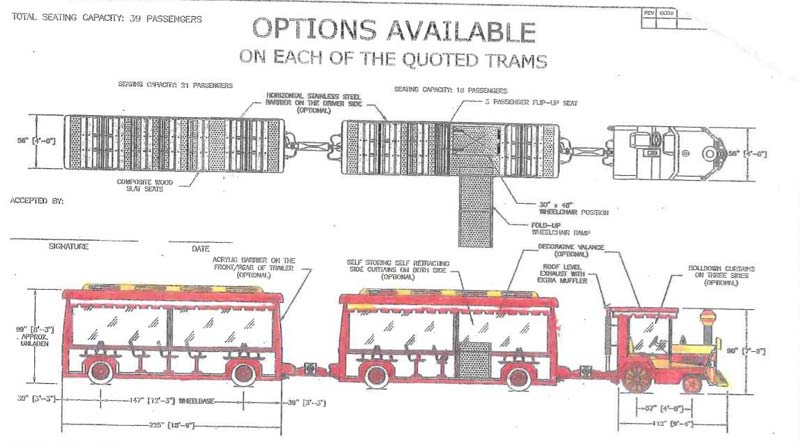 A conceptual drawing from Emily Anne Smith, hired by the Bradenton Beach Community Redevelopment Agency to provide an aesthetic vision for the district, depicts the jitney that is proposed to shuttle people between parking at Coquina Beach and shops and restaurants on Bridge Street. Islander Courtesy Graphic

The pieces are coming together for the Bradenton Beach Community Redevelopment Agency jitney trail.

CRA members voted 5-0 Oct. 22 to direct city attorney Ricinda Perry and city engineer Lynn Burnett to finalize an interlocal agreement with Manatee County allowing the agency to reconfigure a section of Coquina Beach, as well as parking along Gulf Drive at Cortez Beach, to accommodate the trail.

The motion also authorizes Burnett and Perry to finalize a white paper proposal for the project, as well as make a public presentation to the county commission if necessary.

The CRA promotes restoration, growth and tourism for the district — bordered by Cortez Road, Sarasota Bay, Fifth Street South and the Gulf of Mexico — by funding capital improvement projects with incremental tax revenue collected by Manatee County since the area was declared blighted in 1992.

The agency includes the mayor, city commissioners and two appointed members — restaurateur Ed Chiles and Bell, a full-time resident of the district.

The jitney project would provide alternative transportation and parking for the district by creating a trail alongside Gulf Drive for the jitney from Coquina Beach to Bridge Street. The jitney would shuttle people between the two locations.

Brian Rick, communications specialist with the Florida Department of Transportation, District 1, wrote in an Oct. 25 email to The Islander that the jitney trail would be part of a preliminary design and engineering study on Gulf Drive in the DOT’s upcoming five-year work plan, but it has yet to be approved for funding.

However, that’s not stopping the CRA from moving forward with the project.

“If we wanted to wait and have DOT fund everything, and apply for grant funding to have everything accomplished five or 10 years down the road, and not spend any local dollars advancing the effort then, yeah, it would delay it,” Burnett told The Islander in an Oct. 25 interview. “But the CRA board has already allocated money towards it.”

Burnett added that county administrator Cheri Coryea indicated the county would support reworking its concessionaire agreement with the city to help fund the project.

The interlocal agreement establishes the CRA could begin work Dec. 1 on the first phase of the project, which would consist of modifying parking at the Coquina Beach and Cortez Beach parks — which are maintained by the county — to accommodate the tram service.

Such modifications would include reconfiguring Cortez Beach parking to prevent motorists from backing onto Gulf Drive/State Road 789 and ensuring the jitney trail won’t reduce the volume of parking spaces.

Another change involves the installation of the path for the tram, as well as the relocation of the existing pedestrian trail.

Burnett said county commissioners may vote on the interlocal agreement at their Tuesday, Nov. 19, meeting or Tuesday, Dec. 10.

The first phase of the project would be paid for with CRA funds, according to Burnett.

The CRA would then work with the DOT-managed Office of Greenways and Trails’ SUN Trail program to subsidize additional complete street improvements.

Burnett said she met with DOT officials in September to discuss using rights of way for future phases of the project, and the state officials were “extremely supportive.”

“It will be a group effort (to pay for the project),” Burnett said.

Perry told CRA members she met with the Bridge Street Merchants group about the project and received plenty of positive feedback, but some members were worried about the county locking Coquina Beach at night after it closes, stranding parked cars.

Perry suggested entering into another agreement with the county authorizing the Bradenton Beach Police Department to lock the parks, rather than county workers, so the tram could operate after the park closes.

Perry said she wants to finalize and submit all the necessary documents to the county by Oct. 25 so the CRA could begin work on the first phase of the jitney trail.

“This is a big step for our community,” said Chiles, a longtime advocate of a Coquina-to-Bridge Street shuttle.