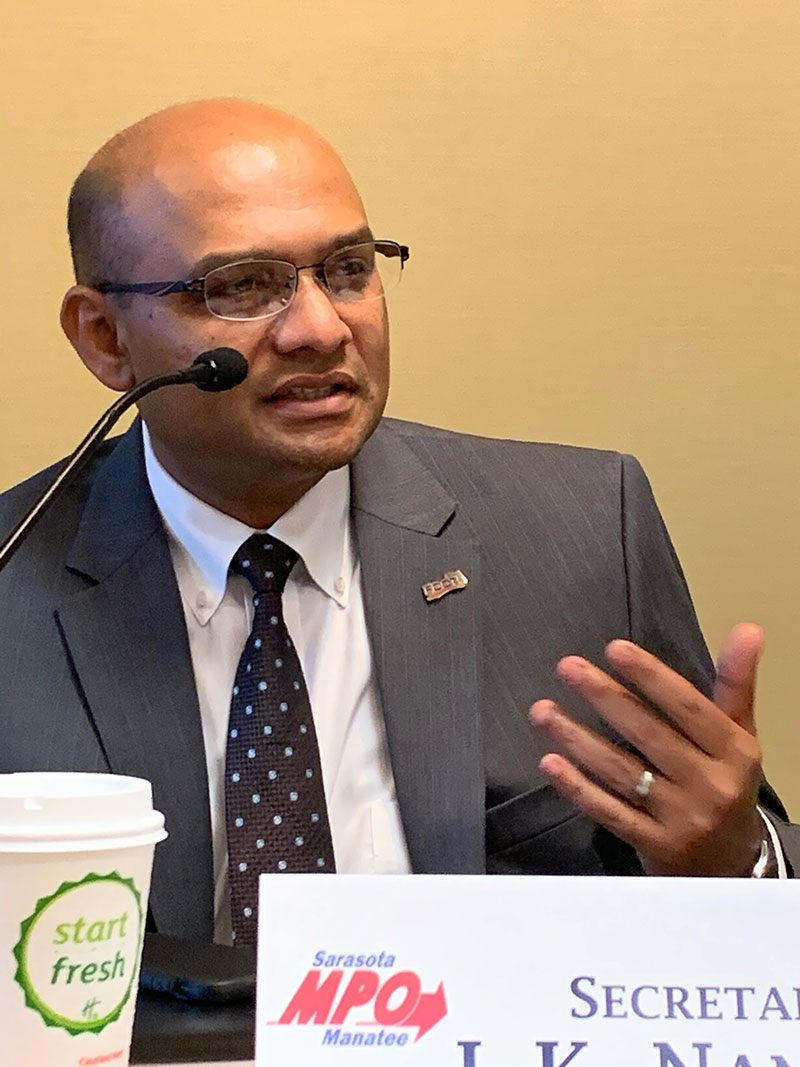 DOT District 1 Secretary LK Nandam says the transportation agency would not do anything to harm the character of a community. Islander Photo: Sarah Brice Kaye Bell, president of the Cortez Cultural Center, says Cortez has been able to maintain its character because no large developments have been able to come in. Islander Photo: Sarah Brice

Opponents of the Cortez Road megabridge proposed by the Florida Department of Transportation may be running out of time.

The DOT has said it expects to release results of its Cortez Bridge Project Development and Environment Study by the end of the year. One transportation authority told The Islander it could be much sooner.

Once the PD&E study is released, the DOT can move ahead with a $6.4 million design contract with the engineering firm H.W. Lochner Inc.

And once design work begins, it may be difficult for opponents to stop the momentum toward construction of the 65-foot-clearance fixed span the DOT said it wants to replace the 62-year-old Cortez Bridge.

“Once they get so far down a road, it’s harder to make changes,” David Hutchinson, executive director of the Sarasota/Manatee Planning Organization, said Sept. 26.

Still, some megabridge opponents believe they have time.

Bradenton Beach Mayor John Chappie, who also opposes the big bridge, is not so sure.

“That’s a good question,” he told The Islander Oct. 3 when asked if there is sufficient time to change the plans. “I don’t know. They could say let’s stop and reconsider. That’s what we’re hoping for.”

Despite DOT public hearings in 2014, 2016 and 2017 and the agency’s announcement in April 2018 that the high fixed span would replace the bascule bridge, official opposition didn’t begin to solidify until Whitmore spoke to the other six commissioners at their board meeting and asked for support.

She did not get it.

But she did get support in mid-September from the Island Transportation Planning Organization, which consists of the three mayors on Anna Maria Island. The ITPO passed a measure to support Whitmore’s proposed compromise of a 45-foot drawbridge.

“This project will not only negatively impact residents and property owners in Cortez village, but on our island community as well,” Murphy wrote.

The Bradenton Beach City Commission passed a resolution Oct. 3 supporting Chappie’s efforts to work toward alternatives to the 65-foot-clearance bridge.

The mayor said he will pass along the city’s opposition to local legislators in Tallahassee.

The Holmes Beach City Commission has voted to draft a letter in support of Whitmore’s compromise.

The strongest opposition, though, comes from Cortez residents, who have spent decades fighting DOT efforts to build a high bridge. These opponents maintain a big bridge would permanently damage the character of Cortez, which was designated a U.S. historic district in 1995, largely due to the grass-roots efforts of longtime residents Linda Molto and Mary Fulford Green.

“Oh, my Lord, if that big old bridge comes in here, it would destroy Cortez,” said Plum Taylor, 85, who has lived in the fishing village since 1952. Her late husband’s family was one of the original five families to settle Cortez in the 1890s.

“Cortez remains quaint because nothing big has been able to come in,” said Kaye Bell, 78, president of the Cortez Cultural Center.

Nandam told The Islander Sept. 23 that community input is part of the PD&E process.

“We would not pick a design of a bridge that would be damaging to any community,” he said. “Our mission is community success.”

The fight over the Cortez Bridge dates to 1989, when the DOT announced it would build a 65-foot-clearance fixed span to replace the 1957 drawbridge.

Public outcry led the DOT to abandon its plans to replace the bridge in the early1990s.

The agency instead turned its attention to the Anna Maria Island Bridge, with plans for a 65-foot-clearance fixed span, same as it had wanted for Cortez.

More than 70 opponents formed a grass-roots organization called Save Anna Maria Inc. in 1993 and won a lawsuit in 1997 that halted plans for the bridge over environmental concerns, including seagrass destruction.

All was quiet for a few years, but the DOT came back with a study in 2010 that determined the Anna Maria Island Bridge would have no significant impact on such factors as natural resources and wildlife. The Federal Highway Administration approved the study in 2016.

The prevailing belief among local officials and some activists was that the DOT would build a high span to replace the Anna Maria Island Bridge and retain the Cortez Bridge or replace it with a similar bascule bridge.

That belief turned out to be wrong.

The DOT began its PD&E study for the Cortez Bridge in 2013 and announced five years later it would build the 65-foot-clearance bridge.

Longtime Cortez resident Molto said she was not surprised.

“We had a feeling it would come back,” she told The Islander in August. “We know the DOT. We just know them. Because we dealt with them before, we know who they are.”

Molto said the anti-bridge efforts are just getting started, haltingly. Many of the old-timers have died, she said, and many of the young people from that era have moved away.

Once design begins, it will take at least two years to complete, DOT spokesman Brian R. Rick told The Islander in August. The DOT likely will hold public meetings during that period, Rick said.

After that would come right-of-way acquisition, then construction.

Rick said right-of-way acquisition is expected to be funded for fiscal years 2024-27, beyond the scope of the DOT’s current five-year work program, which ends in 2024.

Construction also is not funded.

That timetable gives opponents hope that it’s not too late.

“I have nothing against the DOT,” Whitmore told the ITPO at its Sept. 16 meeting, “but I know we can still change it.

“This is our last chance, truthfully, in my lifetime and your lifetime that we can protect the village of Cortez.”