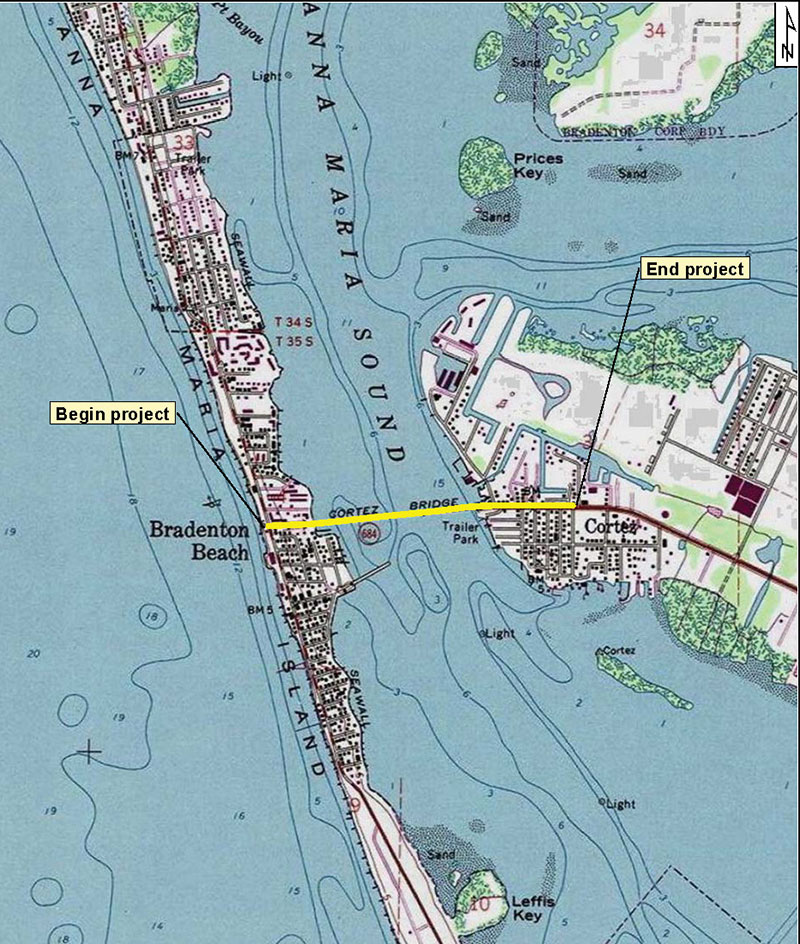 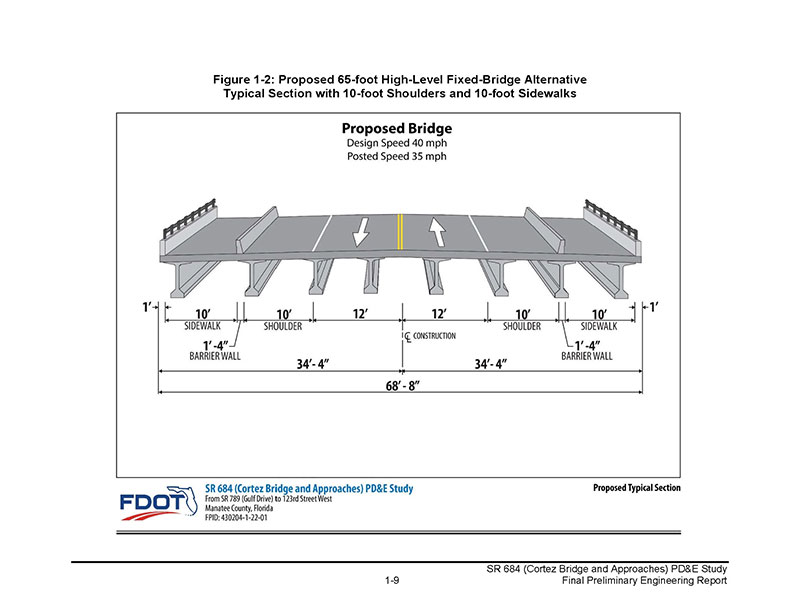 The “typical section: of the proposed 65-foot high-level fixed-bridge.” The graphic is from the “final preliminary engineering report” released Oct. 10 by the DOT. Islander Courtesy Images 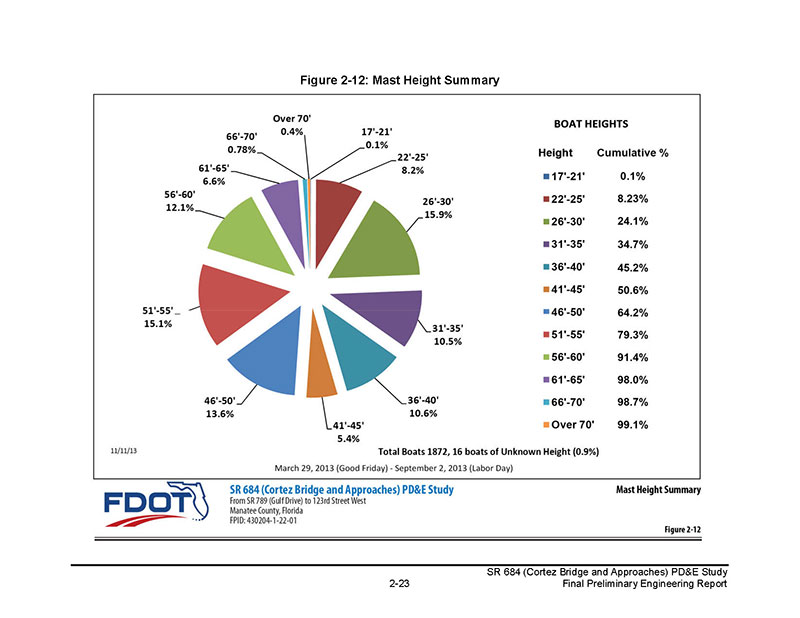 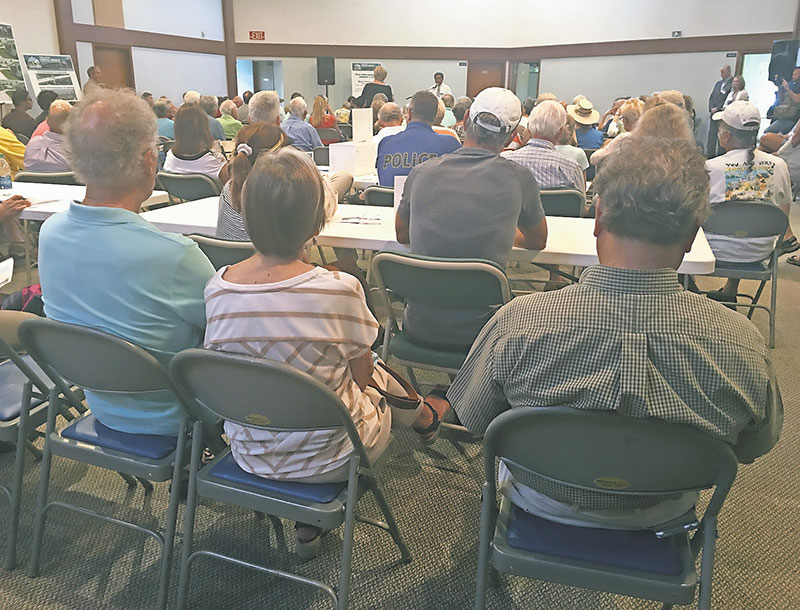 Nancy Deal, standing, speaks Aug. 13, 2017, to DOT representatives among a full house of people, many of whom rose to give public comment against the DOT’s options to replace the Cortez Bridge. The hearing was held at Kirkwood Presbyterian Church in Bradenton. It was the last public meeting before the DOT plans were finalized to replace the bridge that opened in 1957. Islander File Photo: Bonner Joy

Get ready for a shock.

The Florida Department of Transportation announced 17 months ago it planned to replace the aging Cortez Bridge with a 65-foot-clearance fixed-span bridge, but opponents of the bridge were mostly unprepared for a fight when the agency announced Oct. 10 it is moving forward with the megabridge.

Why weren’t they ready?

“I don’t think there’s a good answer for that,” said Nancy Deal, a Holmes Beach resident who has been fighting DOT efforts to build big bridges to Anna Maria Island since moving to Holmes Beach in 2001.

“The bottom line is we didn’t think they’d do it,” Deal told The Islander, hours after the DOT announced its final plans.

Linda Molto, a Cortez activist who has been battling DOT efforts to build a big bridge to Cortez since the late 1980s, also didn’t offer any concrete solutions.

“We will talk with them about other options,” she said shortly after the announcement.

The DOT said Oct. 10 it had approved the project development and environment study, clearing the way for design work to begin on the 65-foot-clearance fixed bridge. The DOT had announced on April 23, 2018, that it had chosen the high-bridge option.

The other two options were to repair the existing bridge or build a 35-foot-clearance drawbridge.

Construction is not funded.

Critics of the mile-long bridge say it will destroy the character of the historic fishing village of Cortez and that the DOT is ramrodding the project through over the vehement objections of local residents.

Bradenton Beach Mayor John Chappie, the city commission and many of their constituents on the islandside of the bridge over the Intracoastal Waterway linking the island to Cortez also are opposed.

The DOT counters that the high bridge is the most cost-effective option and that the agency would not do anything to harm the character of a community.

The Cortez drawbridge was completed in 1957 and has a boating clearance of 21 feet.

The DOT says inspections done in 2008 show that the bridge is “functionally obsolete and structurally deficient” and will need further repairs if not replaced. Major repairs were done in 1996, 2010 and 2015.

The new bridge would have two lanes, the same as the current span, but would include two 10-foot-wide shoulders and 10-foot-wide sidewalks, the DOT says.

Molto and Deal discounted filing a lawsuit, an avenue the Save Anna Maria citizens’ group used in the 1990s to temporarily stop the DOT from building a 65-foot-clearance fixed span to replace the Anna Maria Island Bridge on Manatee Avenue.

The DOT eventually redesigned the bridge to disway environmental impacts, which prevailed. The design work on the new Anna Maria Island megabridge is well underway.

“I doubt it, simply because we don’t have as many people as before,” Deal said about a possible lawsuit.

“We aren’t there yet,” Molto said.

In another possible setback, Manatee County Commissioner Carol Whitmore, who has been advocating for the construction of a 45-foot-clearance drawbridge, told The Islander on Oct. 11 she would not support the 35-foot alternative the DOT included in the PD&E.

“Too low,” she said. “It’s only 15 feet taller than the current one, thus many more bridge openings (than a 45-foot-clearance bridge).

The DOT announced in July 2016 it had dropped the 45-foot-clearance bridge in favor of a 35-foot version, but Whitmore told The Islander on Oct. 12 she had seen plans after that date that included the 45-foot option.

Nevertheless, she said, DOT District 1 Secretary LK Nandam informed her Oct. 10 that the 45-foot version had been removed from consideration.

“I’m disappointed that the state took out the 45-foot option, and I’m sure they did it so they could eventually get to the 65-foot bridge,” she told The Islander.

Whitmore is the only Manatee County commissioner who opposes the 65-foot-clearance bridge. Efforts by local governments to battle the bridge didn’t seem to come together until after Whitmore asked fellow board members at an Aug. 20 meeting to join her in fighting the megabridge. They declined.

The Island Transportation Planning Organization, comprising the mayors of the three Anna Maria Island cities, voted Sept. 16 to support her efforts to build a 45-foot bridge.

Whitmore said in an Oct. 10 interview she will lobby members of the local delegation in the Senate and House of Representatives when she goes to Tallahassee later this month, particularly Senate President Bill Galvano, R-Bradenton.

Galvano said in a Sept. 26 interview with The Islander he supports the 65-foot-clearance bridge. Whitmore said she is aware of Galvano’s position. She knows it will be a tough sell.

“I’m going to talk with him so he can see where we’re coming from, from the people who actually live there,” she said. “I respect his opinion, and I know he respects mine.”

Chappie also said he will work with the local delegation.

“There’s not really a whole lot we can do,” he told The Islander Oct. 3. “I’ll let them know once again.”

In the meantime, the DOT says design work has begun under a $6.4 million contract with the H.W. Lochner engineering firm.

Florida Senate President Bill Galvano, R-Bradenton, offered thoughts on the Cortez Bridge in a Sept. 26 interview with The Islander: