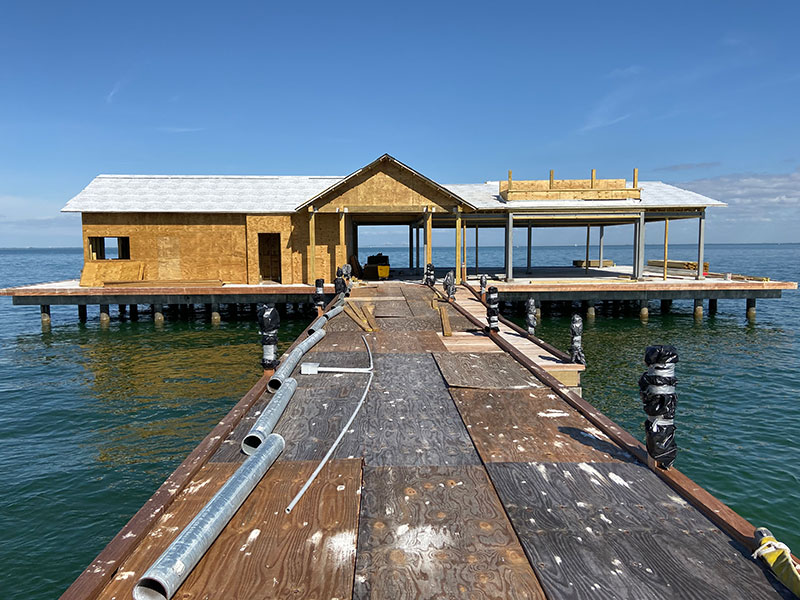 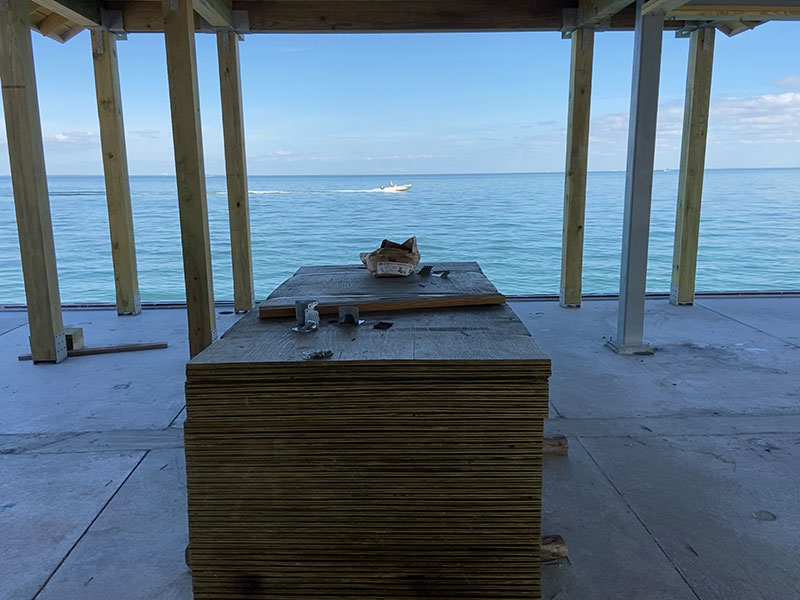 A boater cruises Nov. 22 by the T-end of the new Anna Maria City Pier, where lumber for construction of the restaurant, restrooms and bait shop awaits workers. 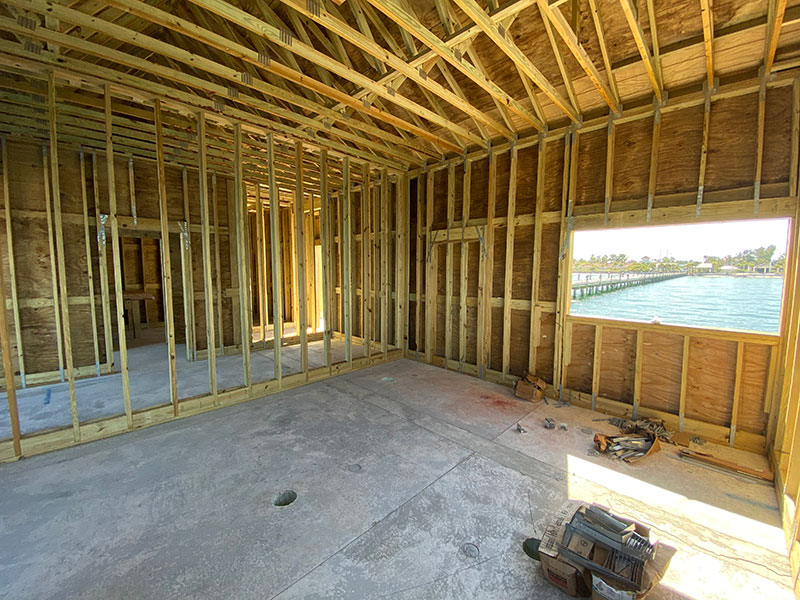 Equipment is staged Nov. 22 inside the partially constructed shell of the T-end bait shop of the new Anna Maria City Pier. 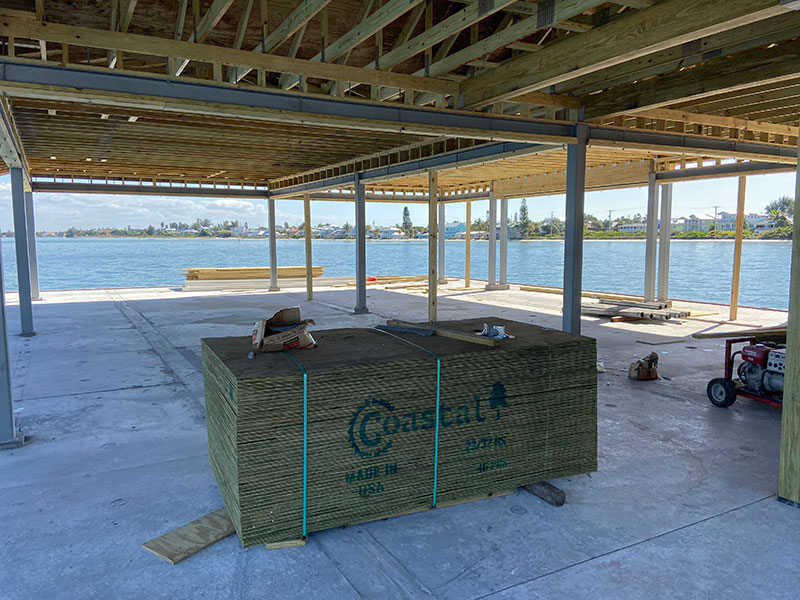 Lumber is stacked Nov. 22 on the concrete platform of the T-end of the new Anna Maria City Pier for use in the construction of the restaurant, restrooms and bait shop. 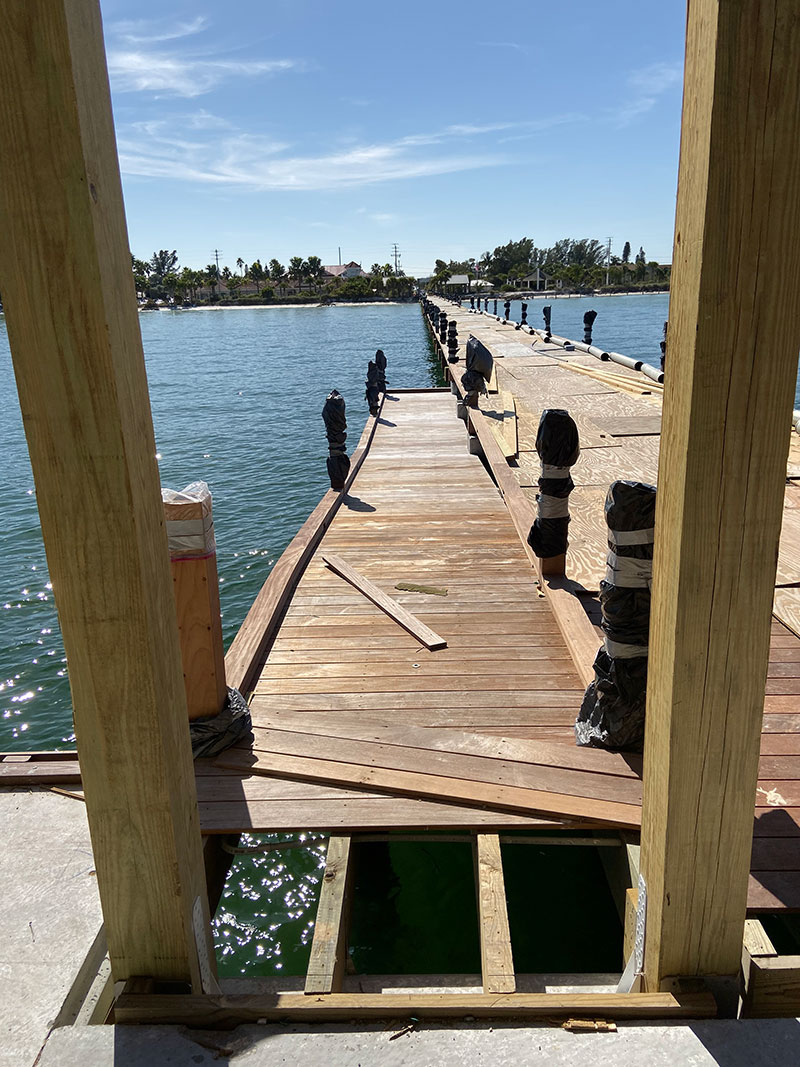 Construction of the T-end restaurant, bathrooms and bait shop at the new Anna Maria City Pier is on hold, awaiting resolution of a design conflict.

Mayor Dan Murphy told The Islander in a Nov. 20 email that Mason Martin, the contractor hired to construct the accessory buildings on the T-end had begun resolving the discrepancy in the angles of the concrete base and the buildings.

Ayres Engineering designed the T-end with a pitch to allow for stormwater runoff, but architects from Schimberg Group designed the restaurant and bait shop for a level surface.

The solution, which Murphy said should take Mason Martin three weeks to complete, involves raising door headers, leveling the floors by pouring additional concrete, expanding drain holes in the base and adding a curb around the perimeter.

Murphy has previously said the fix would cost around $100,000 and it will be paid by Ayres.

Public works manager Dean Jones took The Islander on a Nov. 22 tour of the pier, where it wasn’t clear which part of the solution was being addressed.

As of Nov. 22, much of the walkway decking was finished, except on the north side, which was left open to allow the installation of a fire line in the understructure. Murphy said other structural components and conduits must be installed in the space as well.

While most of the walkway is finished, almost none of it is visible due to plywood laid over top to protect the material from bird excrement.

The birds have not vacated the pier.

Jones said the city would powerwash the decking before opening the pier to the public.

He added that the public’s return will likely stave off the birds somewhat and mitigate the problem.

Jones said Mason Martin bagged the ends of walkway posts to protect connections from the elements for lighting fixtures, that have yet to be manufactured. He could not provide an estimate for when the lighting would be installed.

At the T-end, the contractor has come close to finishing the roof, as well as the shells that will house the bait shop and restrooms, but has yet to begin the  restaurant.

Murphy wrote that he expects the contractor will complete construction on the buildings and platform by February 2020 “or sooner.”

Previously, the mayor had estimated completion by January.