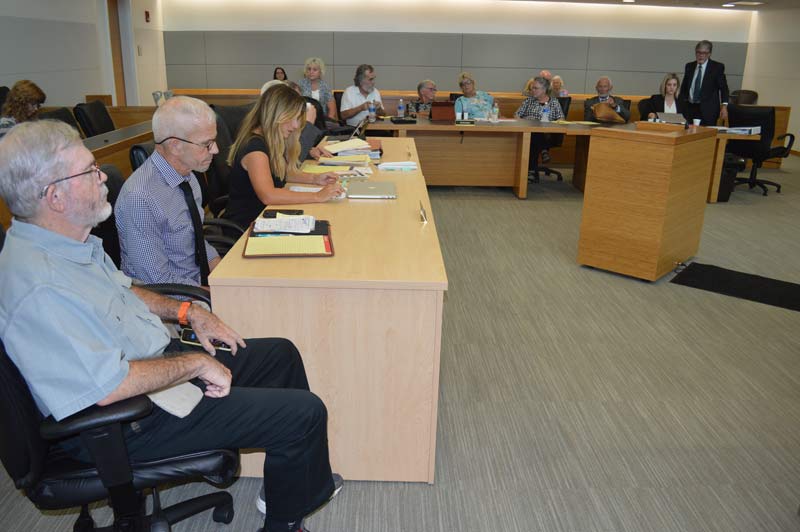 Lawyers and clients gather Nov. 7 in Judge Edward Nicholas’ courtroom at the Manatee County Judicial Center, 1051 Manatee Ave. W., Bradenton, for a hearing on fees in the Sunshine lawsuit that was won by Bradenton Beach. Islander Photo: Chris-Ann Silver Esformes

“The city has prevailed on leg two of our journey,” Bradenton Beach city attorney Ricinda Perry said Nov. 7 during a city commission meeting. “We are now entitled under our statute to recover our attorneys’ fees.”

At a hearing earlier that day, 12th Judicial Circuit Judge Edward Nicholas granted the city’s motion for the defendants to pay attorney’s fees in the case of the city of Bradenton Beach and ex-Mayor Jack Clarke versus six former volunteer city board members for violating Florida’s Government-in-the-Sunshine Law.

Nicholas ruled in July in favor of the city. He determined Nov. 7 that, since the defendants violated Sunshine Law, they must face sanctions.

The suit, filed in August 2017 by Clarke and joined by the city, alleged Sunshine Law violations by former P&Z board members Reed Mapes, John Metz, Patty Shay and Bill Vincent, and Scenic Waves Partnership Committee members Tjet Martin and Rose Vincent, all of whom were members of a now-defunct grass-roots group, Concerned Neighbors of Bradenton Beach.

Clarke and the city, represented by attorney Robert Watrous, argued the board members violated Florida’s Sunshine Law by discussing city matters at CNOBB meetings and through emails, texts and phone calls.

Clarke was absolved of fees by the city.

All but Metz have represented themselves as pro se defendants.

Watrous argued the court should consider who caused the lawsuit when awarding attorneys’ fees.

“Who caused the situation that necessitated the city of Bradenton Beach and Jack Clarke to take action? That was the actions of the defendants,” Watrous said. “Was this a situation where it was an ‘oops,’ where they accidentally stepped over the line? From the clear reading of your honor’s findings, the answer is emphatically ‘No.’

Watrous said the defendants received Sunshine Law training and were warned about conduct at CNOBB meetings. Additionally, the defendants were directed by the Florida Commission on Ethics and the Attorney General’s Office to seek advice from the city or county attorney, but instead, they chose to continue meeting outside of the Sunshine.

Metz’s attorney, Thomas Shults, argued that according to the Sunshine Law, the city is an indispensable party and would first have to sue and obtain an award against itself or one of its agencies before seeking an award of fees from the defendants since they were members of a city board.

Shults said the city has argued that as sub-agencies of the municipality, the boards served by the defendants could neither sue nor be sued.

“Under (the Sunshine Law), can the city get an award of fees against itself as a predicate to an award against the individuals, yes or no?” Shults rhetorically asked. “I think the only box to check in response to that question is ‘no’ and, once that box is checked, the inquiry ends. The motion is denied.”

Watrous rebutted Shults’ argument by stating the board members were sued in their individual capacity and as city board members.

Shults also reminded Nicholas that the defendants are retirees who were acting in support of the community, not for personal gain.

“There was no corrupt intent,” Shults said. “They were motivated by love for the community.”

Nicholas repeated portions of his July ruling, which stated the people involved had good intentions but did not follow state statute regarding open meetings and public records.

“They had some concerns about whether the Sunshine Law applied to the CNOBB activities, and they just ignored those concerns,” he said.

He said owing to the unusual circumstances of the city suing its own board members, the application of the statute regarding fees is unclear, but the intent is apparent.

Nicolas said the purpose of the attorney’s fees provision in the Sunshine Law is to discourage violations.

If the defendants had ceased CNOBB meetings, he said, “we would not be where we are today.”

The judge said since the meetings continued after two warnings, the city had to act, to avoid being sued by outside interests, and he granted the city’s motion for an award of attorneys’ fees from the defendants.

The next step will be an evidentiary hearing on the amount of fees to be awarded.

None of the defendants provided comments following the hearing.

At a city commission meeting following the hearing, Perry briefed the commission on the results.

She said the city’s legal team will compile evidence and testify for a reasonable award of fees.

Mayor John Chappie said people have asked him why the city sued six of its board members.

“This case is about protecting and preserving the right of the people to know that their government is functioning in the open, in the sunshine and is transparent,” he said. “We have strived for that so our residents in our community fully understand and have that confidence in us to make decisions in a public forum.”