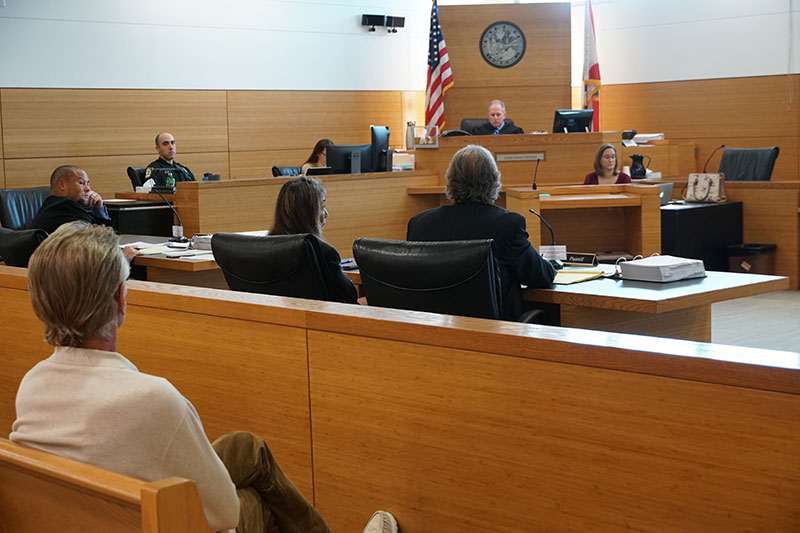 A privately owned treehouse built in 2011 stands in an Australian pine tree in the city setback on the Gulf of Mexico beachfront at 103 29th St., Holmes Beach. Islander Photo: Kathy Prucnell

The judge again ruled for the city.

One of four counts in the ongoing 2013 treehouse case has been decided for the city of Holmes Beach.

The decision on count three of the complaint from Twelfth Circuit Judge Edward Nicholas applies to the city ordinance that established a 50-foot setback from the state erosion control line on the beach, dismissing the owners’ claim that the city’s setback amounts to a taking without compensation.

Lynn Tran and Richard Hazen built the two-story structure in 2011 attached to an Australian pine tree within the setback on the beach, fronting their property at 103 29th St., Holmes Beach, where they reside and operate four short-term rental units.

The treehouse was built without city or state permits — launching years of litigation between the city and the owners that began in 2013.

The city rule prohibits structures within 50 feet of the erosion control line, the separation of public and private ownership. In Holmes Beach, the ECL was permanently set by a 1992 beach renourishment project.

In 2013 and 2016, a code board and magistrate required the removal of the treehouse.

On Nov. 15, in granting the city’s motion, Nicholas dismissed count three of the complaint with prejudice, meaning it cannot be refiled.

Nicholas cited three cases holding a government taking requires a substantial elimination of a property’s productive or beneficial use.

“The plaintiff has not been denied an economically viable use of the property,” he concluded, calling it “a fatal flaw” in their case.

Prior to constructing the treehouse in 2011, Hazen claimed he spoke to a city building inspector, and says he was told the owner the city had no regulations for a treehouse. He did not, however, show the inspector plans or describe the scope of the planned treehouse.

Months later, an anonymous complaint brought the treehouse to the attention of the city code officer — marking the start of eight years of conflict between the city, the Florida Department of Environmental Protection and the owners.

Tran and Hazen were in court Nov. 15 with their attorney, David Levin.

Walking out of the courtroom, Tran and Levin said they were hopeful on the three other counts of their 2013 case.

The other counts aim to block the treehouse removal and fines with allegations that the city laws were unconstitutional based on a single-subject rule, unfair procedures and conflicting state law.

The Nov. 15 hearing addressed one of several cases filed by the treehouse owners that year.

The owners appealed the code board decision leading to Dunnigan’s decision and another case appealed the city’s refusal to put an initiative on the ballot after the couple circulated petitions in the community, which, after several attempted appeals, ended with the U.S. Supreme Court, where the owners were denied a hearing.

The treehouse owners have lost at every turn.

Currently pending are two 2018 cases brought by the owners without an attorney, one in federal court and another in state court alleging multiple equitable and constitutional claims against the city and the DEP.

In the federal proceeding — now in the 11th Circuit Court of Appeals following a lost appeal to the 2nd District Court of Appeal — the city is expected to file a response in November.

Also in state court, the city filed a 2018 case to enforce its magistrate’s decision to remove the structure and pay $50 daily fines, which have accumulated to almost $80,000.