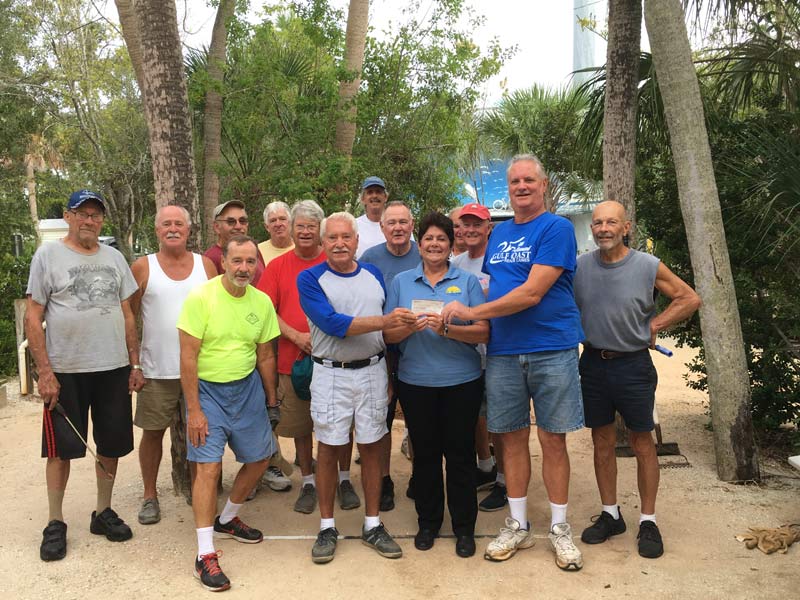 It’s finally the busy season for sports on Anna Maria Island as the temps from summer finally drop for fall.

Playoff action got underway Nov. 5 in the youth soccer league at the Center of Anna Maria Island.

The action kicked off with No. 3 seed Ugly Grouper taking on No. 2 Moss Builders in 8-10 division semifinal action. The game ended in a 2-2 tie after regulation and was decided by penalty kicks.

Nixon Conner converted the game-winning penalty kick to send Ugly Grouper to the finals. Conner also scored both regulation goals for Ugly Grouper, which received a combined 12 saves in the victory from Jack and Jesse Zaccagnino.

The second semifinal saw No. 4 West Coast Surf Shop upset No. 1 HSH Designs 1-0 behind a goal from Brady Thompson off an assist from Maddox Culhane. Goalie Magness Rollins helped preserve the victory with eight saves.

Goalie Dylan Sato made 12 saves to keep the game close for HSH Designs.

The matches are set. Ugly Grouper will take on the Surf Shop in the 8-10 championship game at 6:45 p.m. Nov. 12, preceded by the third-place playoff at 6 p.m. between HSH Designs and Moss Builders.

Semifinal action in the 11-15 division kicked off with No. 2 seed Lancaster Design cruising to a 4-1 victory over No. 3 Progressive Cabinetry. Jackson Pakbaz and Dalton Fox scored 2 goals each to pace Lancaster, which received six saves from Christian Cole in the victory.

Elek Brisson notched the lone goal for Progressive Cabinetry, which also received a combined four saves in the loss from goalies Maya Ferrari and Mikey Coleman.

The second semifinal match saw No. 4 Island Vacation Properties battle to a 4-4 tie with No. 1 Ugly Grouper, sending the match to a penalty kick shootout.

Thomas Philpott scored all 4 goals for Island Vacation Properties in regulation and also combined with Jayden Sparks and Luke Dellinger to make eight saves to help preserve the victory.

Abbie Philpott notched 3 goals to lead Ugly Grouper, which also received a goal from Frankie Coleman and six saves from Travis Bates in the loss.

Ugly Grouper will take on Progressive Cabinetry in the third-place game at 7:30 p.m. Nov. 12, after presstime for The Islander, followed by the championship game at 8:15 p.m.

After three weeks of action in the gym for the adults in the basketball league at the center, Ugly Grouper sits atop the standings with a 3-0 record, a game ahead of second-place Gulfview Windows and Doors and Moss Builders, both sporting 2-1 records. Progressive Cabinetry and Gnarly Mangrove follow with 1-2 records, while Beach Bums is 0-3, still in search of a victory.

Action Nov. 6 tipped off with Moss Builders slipping past Progressive Cabinetry 55-53 behind 25 points from Alex Gilman and 13 points from Joey McElfresh. Jacob Kiester finished with 9 points and Trent Gillis added 7 points in the victory.

Skylar Pensyl scored 29 points to lead Progressive Cabinetry, which also received 15 points in the loss from Thor Miller and 8 points from Dylan Hano.

The second game of the evening saw Ugly Grouper outscore Gulfview Windows and Doors 56-49 behind a balanced attack led by Dominick Otteni’s 16 points and 12 points from Andrew Terman. Yuri Pereira added 8 points in the victory and Drew Taylor and Kevin Mucahy finished with 6 points each.

JB Shuck scored 16 points and Jon Moss added 12 for Gulfview, which also received 11 points from Clay Edwards in the loss.

The last game of the night saw Gnarly Mangrove edge Beach Bums 45-43 behind 15 points from Chase Richardson and 13 points from Austin Miller. Kevin Roman added 6 points and Tim Holly finished with 5 points to round out the scoring.

After five weeks of action, Blalock Walters and Sato Real Estate are pulling away from the pack in the adult soccer league at the center.

Blalock Walters leads the way with a 4-0-1 record and 13 points, one up on Sato Real Estate, which is 4-1 with 12 points. Ross Built is alone in third place with a 3-2 record followed by Vintage Beach at 2-1-1. Flynn Law and Moss Builders are tied for fifth place with matching 2-2 records, while MuniPlan is 2-3.

Vacasa and Lancaster Design occupy the cellar on matching 0-4 records.

The action last week kicked off Nov. 7 with Sato Real Estate cruising to a 9-1 victory over Lancaster Design behind 3 goals and an assist from Tim Holly and 2 goals each from Conrado Gomez and Amy Ivin. Josh Sato and Chris Klotz each added a goal, while Cliff Powell finished with two saves in the victory.

Miguel Ajoy scored the lone goal for Lancaster Design, which also received a combined 16 saves from Omar Polar and Michael Brusso in the loss.

Ross Built outscored MuniPlan 10-6 in the second match of the night behind 5 goals and an assist from Kevin Roman. Connor Bystrom, Lexi Sato, Chris Circharo, Damir Glavan and John Coleman each scored goals, while Mark Rudacille made 12 saves.

Ryan Hogan scored 2 goals to lead MuniPlan, which also got goals from Nathan Kragt, Steve Oelfke and Zach Long in the loss.

Zachary Lieb scored 4 goals to lead Flynn Law, which also received 2 goals each from Daniel Anderson and Murat Akay in the loss and 14 saves from Robb Marshall.

The final match of the evening saw Blalock Walters edge Vacasa 3-2 thanks to a goal each from Brooke Capparelli, Greg DeMuse and Luis Pichardo and strong goal-tending from Luke Grady, who finished with eight saves in the victory.

Jessica Williams and Connor Haughey each scored a goal and Trey Horne finished with five saves.

The team of Bob Palmer and Tom Farrington eliminated Hank Huyghe and Steve Hooper 22-10 in the first semifinal, as Tim Sofran slipped past Bob Lee and Tom Skoloda 21-18 in the other semifinal matchup.

In the finals, it was all Palmer and Farrington in a 22-5 victory.

Three teams advanced to the knockout stage during the Nov. 9 games. Rod Bussey and Norm Langeland drew the lucky bye into the finals and watched as Hank Huyghe and Sofran defeated Steve Doyle 21-17 to advance to the finals. Huyghe-Sofran outlasted Bussey-Langeland 21-13 in the final to earn the day’s bragging rights.

The Key Royale Club men took their game on the road Nov. 6 to Crystal River for their semi-annual golf outing on the Champions Course at Plantation Inn.

The 35 men who took the challenge played their regular modified Stableford-system match.

Marty Hicks and Dale Miller shared individual honors with matching scores of plus-8, while Dale Miller was part of the winning team of Dean Boring, Gary Duncan and Hoyt Miller. They combined on a plus-9.

Second place went to the team of Bob Blaser, Ron Buck Quentin Talbert and Joe Tynan with a score of plus-7.

Judy Christenson rode a chipin on the seventh hole to grab first place in Flight A with a 2-under-par 30, three shots ahead of second-place finisher Pam Lowry.

Sue Wheeler fired a 1-under-par 31 to win Flight B by a stroke. Jana Samuels and Margrit Layh finished in a tie for second place at even-par 32.

Fran Barford’s 1-over-par 33 was good enough for first place in Flight C. Beth Lindeman was a stroke back in second place.

Terry Westby fired a 5-under-par 27 for the low round of the day and first place in Flight D. Laurie Hicks was alone in second place with a 4-under-par 28, while Peggi Claus took third place with a 1-under-par 31.

Registration is underway for the winter season of the youth flag football league at the center.

Players, or their parents, can register online at www.centerami.org, by calling the center at 941-778-1908 or in person at the center, 407 Magnolia Ave., Anna Maria.

The deadline to register is Dec. 9 and a $10 late fee will be added to any account not paid in full by the deadline.