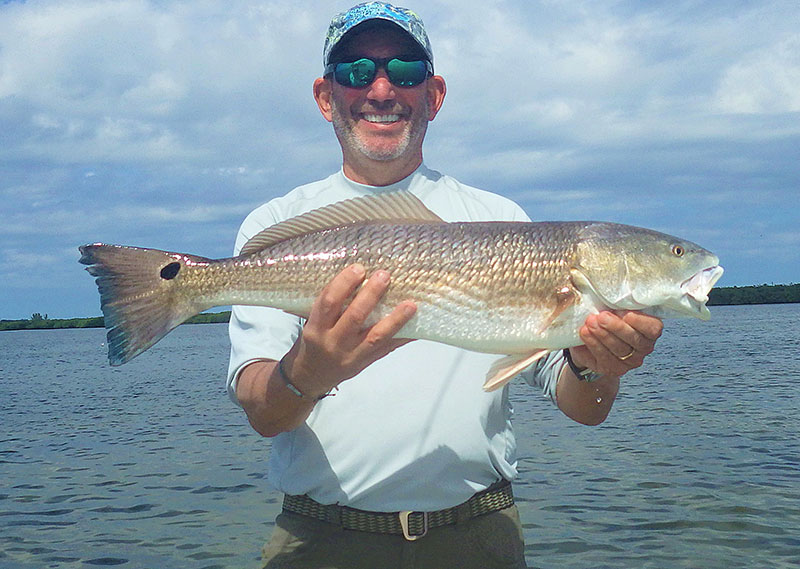 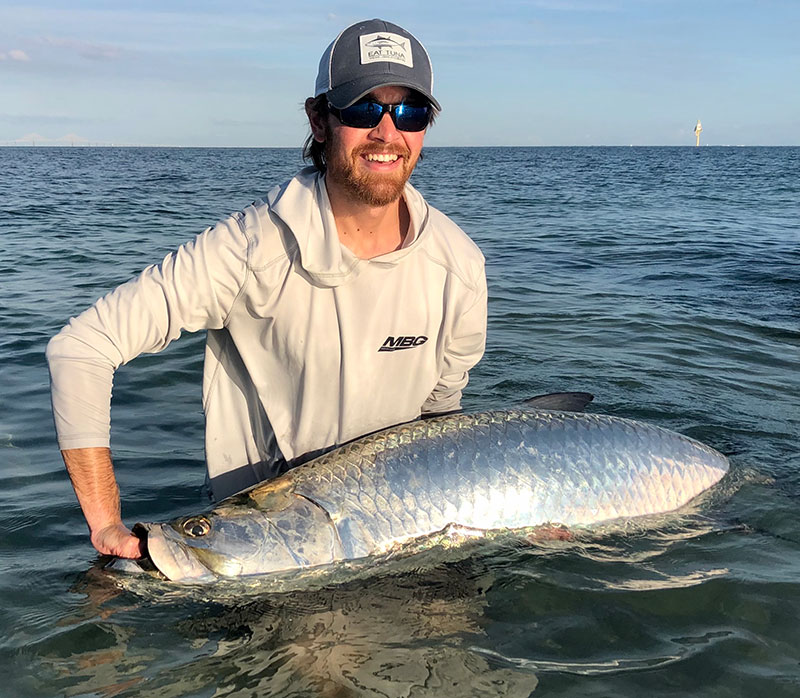 Capt. Taylor Sears of Scituate, Massachusetts, shows off a beautiful late-season tarpon caught on a live crab Nov. 11, while on a busman’s holiday with Capt. David White of Anna Maria Charters. White said, “We see them here and there off of the beach moving south, but this was a giant school in Tampa Bay.” Taylor, along with his dad and brother, own Mass Bay Guides in Scituate, where they guide clients to giant bluefin tuna, stripers and bluefish — anything that swims in the Northeast Atlantic.

Water temperatures have dropped slightly around Anna Maria Island but that doesn’t mean the fishing is cooling off.

Migratory fish such as Spanish mackerel, jacks and ladyfish are swarming the nearshore structure of the Gulf of Mexico and Tampa Bay.

If you’re looking for some great light-tackle action, these fish can accommodate you. As for eating fish, the jacks and ladyfish are worthless, but macks can be quite good if you know how to prepare them.

My favorite preparation is to smoke them and stir up a batch of smoked fish dip. And speaking of firing up the smoker, I’m happy to note kingfish are making a showing around structure in the Gulf of Mexico, as well as in the shipping channel in Tampa Bay. Slow-trolling with live threadfin herring on a stringer will work, or you can speed it up by trolling with lipped plugs.

Catch-and-release action on snook, redfish and trout is going strong for the sports anglers as free-lining live shiners is attracting all three species. Soft plastics on a jig head are working, especially for the trout.

Moving offshore, yellowtail and mangrove snapper seem to be the most consistent catch. Bottom fishing with live shiners is attracting a bite. Red grouper and gag grouper are being caught in this fashion. More toward the surface, offshore fishers are enjoying action on blackfin tuna, blacktip sharks, barracuda and a few cobia.

On my Southernaire charters, I’m targeting the macks and mangrove snapper in the Gulf and in Tampa Bay. While mackerel fishing, I’m noticing quite a few large blacktip sharks charging through the area, and I’m taking advantage of the opportunity, putting clients on the bite.

Capt. Warren Girle is fishing the flats of southern Tampa Bay for catch-and-release snook and redfish. Both species are cooperating nicely, with a little coaxing from live chum. Throwing live shiners as chum against mangrove shorelines is luring these fish out from the bushes, which makes it easier to present a shiner on the hook.

Fishing in deeper grass areas away from the mangroves is yielding some over-slot catch-and-release spotted seatrout, including numerous fish 14-18 inches. Jack crevalle and ladyfish are present in these areas and at times dominate the trout bite.

Lastly, fishing over structure in Tampa Bay in depths of 10-15 feet is producing action on Spanish mackerel and mangrove snapper.

Capt. Aaron Lowman is finding a good Spanish mackerel bite around structure in the Gulf of Mexico. Lowman says mackerel around 20 inches are quickly taking live free-lined shiners cast around the reefs. Mangrove snapper are present and are taking free-lined baits and baits on a knocker rig.

While targeting the macks, Lowman is hooking into a few 10-15 pound kingfish. Moving into Tampa Bay, he’s finding catch-and-release snook to be accommodating for his charters. Fishing during swift moving tides is key to getting a good bite. Fishing over grass areas of 5-8 feet is producing this bite with jack crevalle and small mackerel mixed in. Targeting inshore gag grouper in Tampa Bay around reefs and wrecks is yielding a bite.

Capt. David White of Anna Maria Charters is working offshore when the winds are light and the seas are calm. Yellowtail and mangrove snapper are being caught frequently, as well as red grouper by bottom fishing around hard bottom, ledges and other structure. Catch-and-release species — barracuda, some sharks, goliath grouper and amberjack — are taking the hook.

Moving inshore, catch-and-release snook and redfish are White’s prime targets. Casting live shiners along mangrove shorelines is yielding action for clients. Black drum, mangrove snapper and Spanish mackerel are being caught around artificial reefs in Tampa Bay. Live shiners fished on the bottom are producing the snapper and drum, while free-lined baits are working for the macks.

Capt. Jason Stock is finding greater numbers of kingfish as water temps drop. Free-lining or slow trolling large shiners or threadfin herring is luring fish to the hook. Kings up to 25 pounds are being caught in this fashion.

Moving further offshore, amberjack — although catch-and-release — are in abundance. Fish up to 60 pounds are being caught around wrecks and hard-bottom areas. Mangrove and yellowtail snapper are quite attainable offshore, as well as almaco jacks and migratory fish including blackfin tuna and cobia.

Lastly, goliath grouper are being found in good numbers and reeled up for entertainment and a trophy photo.

Jim Malfese at the Rod & Reel Pier says the Spanish mackerel bite is excellent on days when the water is calm and clear. Pier fishers using artificials — speck rigs, bucktail jigs, silver spoons or Gotcha plugs — are catching as many macks as they can stand. Those casting speck rigs are reeling up two at a time.