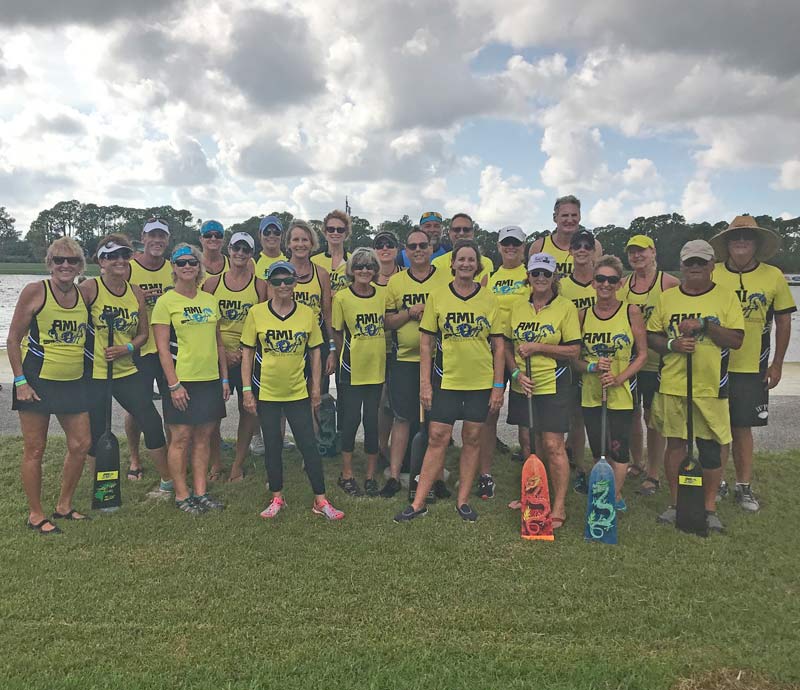 After six weeks of youth soccer action at the Center of Anna Maria Island, playoff matchups are set.

Teams were to square off in semifinal games set to begin at 6 p.m., Nov. 5, after The Islander went to press.

The first semifinal was to see No. 2 Moss Builders take on No. 3 Ugly Grouper in the 8-10 division. The second division semifinal was to follow at 6:45 p.m., with No. 1 seed HSH Designs facing No. 4 West Coast Surf Shop.

In the 11-15 division, No. 2 seed Lancaster Designs was to take on No. 3 Progressive Cabinetry at 7:30 p.m. in the first semi, followed by No. 1 seed Ugly Grouper versus No. 4 Island Vacation Properties.

Championship night is set for Tuesday, Nov. 12, with third place games followed by championship games in each division. Kickoff will be 6 p.m. for the game to decide third place in the 8-10 division.
Regular season action came to a close Oct. 29 with HSH Designs edging Ugly Grouper 3-2 in a possible preview to the 8-10 championship game.

Savanna Coba led the way with 2 goals and an assist. Sterling Holiday completed the scoring with a goal, while Dylan Sato made five saves in goal to help preserve the victory.

Nixon Conner notched a pair of goals to lead Ugly Grouper, which also received seven saves from Jack Zaccagnino in the loss.

Moss Builders rolled to a 3-0 victory over West Coast Surf Shop in the second 8-10 division match of the night behind a pair of goals from Mason Moss. Jackson Kennedy added a goal, while Alexander Teich finished with five saves in the victory.

The final two regular season matches in the 11-15 division were somewhat anti-climatic, as Island Vacation Properties forfeited without enough players to field a team.

The second match of the evening was played, and Ugly Grouper rolled to a 10-3 victory over Progressive Cabinetry behind 7 goals from Abbie Philpot and 3 goals from Frankie Coleman. Travis Bates finished with nine saves to help preserve the victory.

After four weeks of action in the adult soccer league at the center, it appears Blalock Walters and Sato Real Estate are riding atop the league. Blalock Walters boasts a 3-0-1 record, while Sato Real Estate is right behind at 3-1. Flynn Law follows with a 2-1 record, while Ross Built, MuniPlan and Moss Builders follow at 2-2. Vintage Beach holds down the seventh spot in the standings, while Vacasa and Lancaster Designs are both in search of a victory.

Action Oct. 30 kicked off with Flynn Law rolling to an easy 8-3 victory over MuniPlan behind a balanced scoring attack spearheaded by Murat Akay — a hat trick. Daniel Anderson, Zachary Lieb, Chris Scott, Nate Welch and Chris Culhane all added goals to complete the scoring, while Robb Marshall closed out the victory with 14 saves.

Vintage Beach edged Vacasa 6-4 in the second match of the evening behind 2 goals each from Cody Wright and Zach Reda. Joseph Hutchinson and Clancy Vaughn each notched a goal, while Cole Peterson came through with four saves in the victory.

Stetson Matthews scored 3 goals to lead Vacasa, which also received a goal from Eric Pullen and assists from Jessica Williams and Connor Haughey in the loss.

Blalock Walters solidified its hold on the top spot in the standings with a 3-1 victory over Sato in the third match of the evening.

Ross Built exploded for 12 goals to cruise past Moss Builders in the last match of the night behind 4 goals from Kevin Roman and 2 goals each from Chris Circharso, Greg Ross and Damir Glavan. Connor Bystrom added a goal and an assist, and John Coleman finished with a goal. Mark Rucacille closed out the victory with nine saves.

After two weeks of action in the adult basketball league at the center, there already appears to be a delineation of the haves and have nots.

Ugly Grouper and Gulfview Windows and Doors are in first place with matching 2-0 records, though Ugly Grouper is averaging over 7 points more per game in the scoring column.

Moss Builders and Progressive Cabinetry follow with 1-1 records, while Gnarly Mangrove and Beach Bums are still looking for a victory.

Ugly Grouper ran away from Gnarly Mangrove and cruised to a 57-37 victory behind a balanced scoring attack led by Dominick Otteni’s 16 points and 15 points from Kevin Mulcahy. Drew Taylor chipped in 13 points, while Yuri Pereira with 8 points and 7 points from Ryan Gilman completed the scoring for Ugly Grouper.

The second game of the night saw Gulfview Windows and Doors cruise past Progressive Cabinetry 53-36 behind 27 points from Jordan Demers and 19 points from JB Shuck. Ray Gardner chipped in 7 points, while Jonathan Moss completed the victory with 4 points.

Joey McElfresh led the way with 21 points, while Jacob Kiester added 13 and Alex Gilman finished with 12 points. Trent Gillis with 11 points and Bradley Coleman with 10 points rounded out the win for Moss Builders.

Three teams emerged from pool play during Oct. 30 horseshoe action at the Anna Maria City Hall horseshoe pits. The team of Bob Lee and Bob Palmer drew the bye and watched as Tom Farrington walked his way to the final after a 21-6 victory over Hank Huyghe and Tom Skoloda.

In the finals, Farrington strolled to a 22-5 victory over Lee and Palmer to earn the day’s bragging rights.

Five teams advanced to the knockout round with 2-1 pool play records during the Nov. 2 games. In the first round, Farrington and Steve Doyle got the bye and watched as Lee and Jay Disbrow moved on with a 23-11 victory over Bob Heiger and Norm Langland, while Neil Hennessey and Rod Bussey eliminated Tim Sofran and Gene Bobeldyk 22-9.

Lee and Disbrow drew the bye into the final and watched Farrington-Doyle slip past Hennessey-Bussey by a 23-20 score. Lee and Disbrow outlasted Farrington and Doyle on a game-winning double ringer by Lee to put the exclamation point on a 21-15 victory.

There was a full week of golf action at the Key Royale Club in Holmes Beach last week, starting with the men playing a nine-hole modified-Stableford system match Oct. 28.

Gary Duncan, John Kolojeski and Tom Solosky each carded plus-2s to finish in a three-way tie for first place.

Brenda Solleveld fired an even-par 32 to win first place in Flight A by three strokes over Helen Pollock.

Margrit Layh carded a 4-under-par 28 for the low-net round of the day and first place in Flight B. Roxanne Koche was alone in second with a 2-over-par 34.

Amy Tripp rode a birdie on the first hole to a 2-under-par 30 and first place in Flight D. Terry Westby’s even-par 32 gave her second place in the flight.