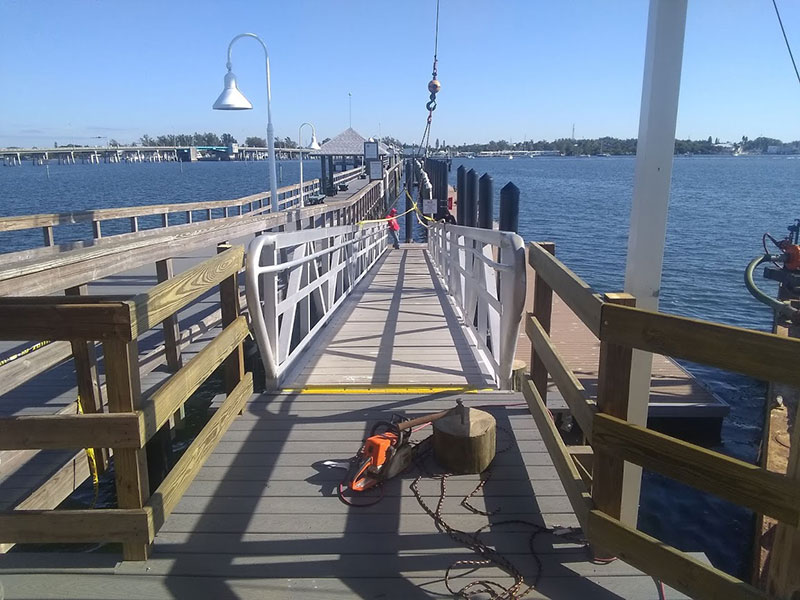 Boating to the Historic Bridge Street Pier in Bradenton Beach is a possibility once again.

Public works director Tom Woodard emailed city officials Dec. 4, informing them the dock is open for public use. The dock was closed Oct. 4 when public works employees noticed the gangway — the walkway connecting the pier to the dock — was pulling away from the pier.

The dock allows boaters to tie up to the structure and access the pier, which houses Anna Maria Oyster Bar restaurant and Paradise Boat Tours, which launches boat tours from the dock.

The city’s community redevelopment agency, which funded the dock, hired Duncan Seawall to construct a support structure with four cross-braced timber pilings for the gangway to rest on instead of the pier. The contractor also extended the pier to the structure to complete the walkway.

Woodard told The Islander Dec. 3 that Duncan had placed the gangway. The next day, building official Steve Gilbert confirmed the gangway connection passed city inspection and the dock was ready for use.

“I’m happy about the dock, albeit it was fraught with disappointment, frustrations and challenges,” Sherman Baldwin, owner of Paradise Boat Tours and president of the Bradenton Beach Area Merchants, told The Islander in a Dec. 5 interview. “But the fact of the matter is, today we have an amazing dock and we’re going to be all set for high season.”

Baldwin said he’s happy the dock opened in early December instead of later in the winter-spring tourism season, which, he said, “would be devastating.”

However, work on the dock remains unfinished.

Duncan’s contract with the CRA includes the installation of a safety railing and ladders at the dock, as well as the replacement of 18 rollers — the mechanisms connecting the platforms to the support pilings that allow for tidal movement — but the city must furnish the parts.

Duncan was set to install safety railings Dec. 4, but Woodard told CRA members at a meeting that day that the products purchased through Golden Marine Systems had issues. He said he received three straight segments of safety railing, but no corner pieces.

Woodard added that the railing and ladders don’t utilize the track system. The system was designed by Technomarine Construction, the dock’s original designer and manufacturer, along the side of the dock to allow for attachments.

City attorney Ricinda Perry said the CRA either could ask Golden to remanufacture the railing and ladders to fit the track system or purchase the components through Ronautica Marinas, the contractor Technomarine hired to manufacture several parts of the dock.

She said the contractor also could provide rollers to replace 18 rollers installed by Hecker Construction that failed to meet Technomarine’s design.

Golden could provide the three components for $14,000. The same items would cost $20,000 from Ronautica due to a $6,000 overseas shipping cost, according to Perry.

“We need to give that company the chance to make this right,” Cole said.

Mayor John Chappie, also a CRA member, moved to direct Cole, Woodard and Police Chief Sam Speciale to discuss the insufficiencies of the railings and ladders with Golden.

If Golden will remanufacture or change the products to fit the track system, the CRA also will purchase replacement rollers from Golden.

But if Golden refuses to change the railing and ladders, the CRA will purchase all three components through Ronautica for a cost not to exceed $25,000.

Perry said Hecker is responsible for damages caused by the improper installation of the gangway and rollers. However, the contractor has retained an attorney and plans to oppose paying the cost.

City officials first opened the dock Aug. 2, after two-and-a-half years of turbulence due to failures by the company originally contracted to build and install the dock. The dock, which cost $191,524, replaced one damaged by storms and removed in 2017.