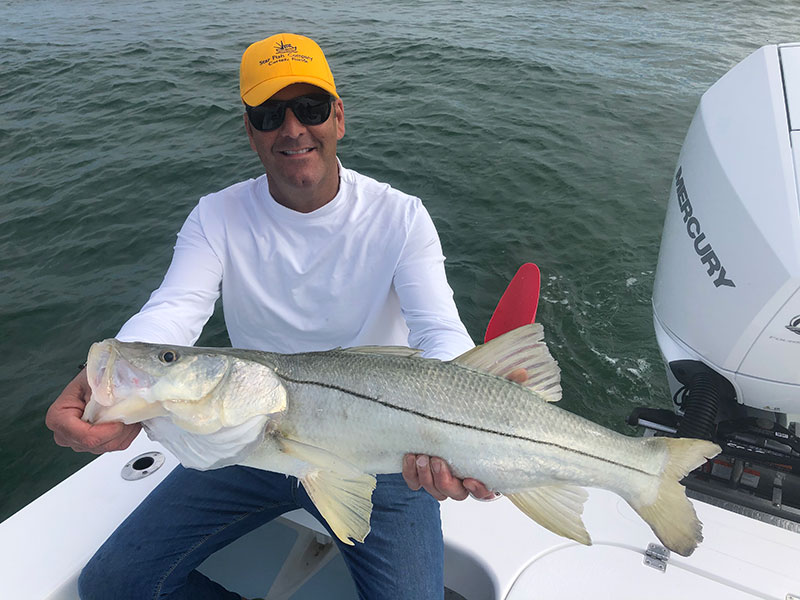 Joey Rearden of Atlanta shows off a “beautiful snook,” according to Capt. David White, caught, photographed -and released Dec. 3 using a live shiner for bait. White, of Anna Maria Charters, said the fish was about 34 inches and weighed about 12-14 pounds. He added, he always tries to “get the big ones back in the water quickly.” 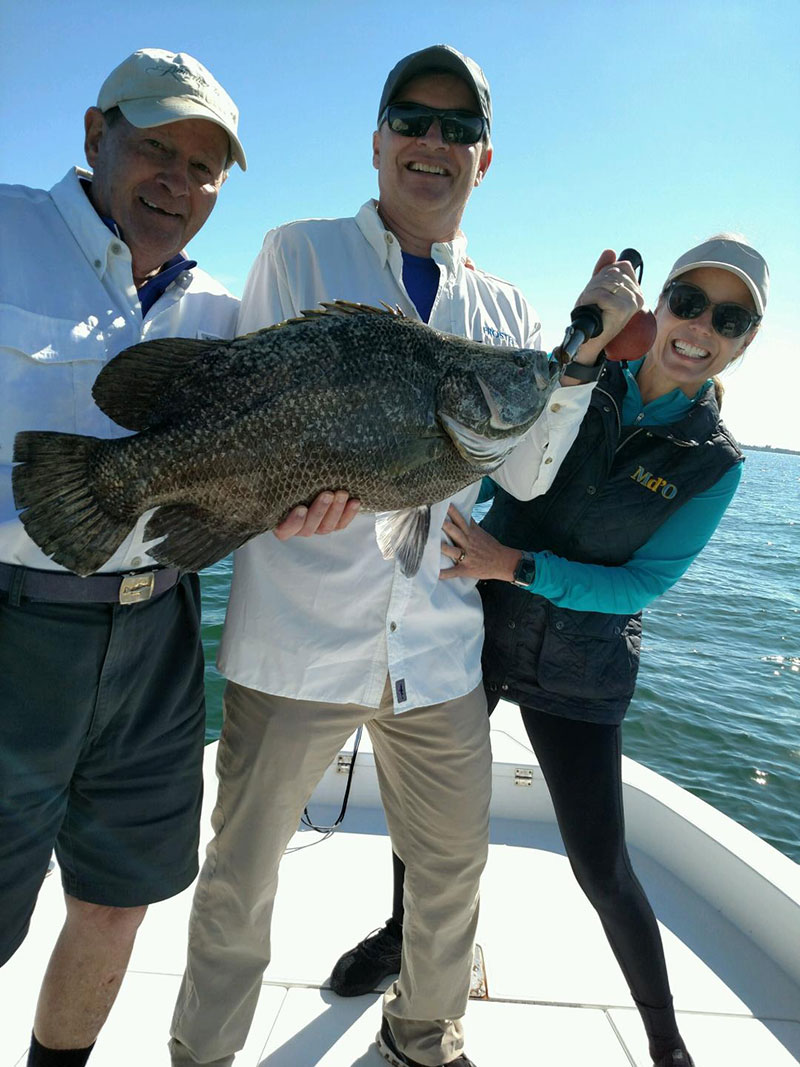 Walter Hacket, left, Dan and Beth Pride share the credit Nov. 22 for this 13-pound tripletail, landed on a shiner in the nearshore waters of Sarasota Bay. Hacket was surprised by daughter Beth with a fishing trip with Capt. Warren Girle for his birthday.

As we slip into December, we’re going to see the transition from fall fishing to winter fishing get underway.

With water temps overnight dropping into the mid-60s, the availability of live shiners is dwindling, meaning the species that feed on shiners may be reduced as well. So now is the time to be frequenting your favorite source for live shrimp.

Whether it’s the tackle shops, bait shops, piers or gas stations, it’s winter, and it’s time to start buying bait. Plus, you’ll find most of the species that regularly eat live shiners will take a live shrimp offering when the temp turns cold.

You may want to change your tactics as well. It’s time to start fishing residential docks and canals, as well as creek mouths and even waters in the Manatee River.

Fishing the shorelines of Anna Maria Island close to the beaches is another option, especially when the pompano, whiting and black drum begin to show up.

And, of course, there’s the much-anticipated sheepshead bite, which, should come on strong in the weeks to come.

So, no more rising with the sunrise to go out and catch shiners. Sleep an extra hour or two and just buy shrimp.

On my Southernaire charters, I’m using live shrimp as bait on some occasions, but I’m still carrying live shiners, just in case I need them.

Using live shrimp as bait around docks and other structure is resulting in black drum, mangrove snapper, flounder and catch-and-release redfish. Free-lining live shrimp under a cork also is attracting action, especially over deep grass flats. Spotted seatrout and jack crevalle are readily taking the bait on the flats.

Moving into the Gulf of Mexico, Spanish mackerel are cruising within a mile of the beaches. This is where the live shiners come in handy. Free-lining these baits on a longshank hook is resulting in numerous hookups.

After catching enough macks for a meal, I’m reserving five-six legal sized fish to cut up for shark bait. Fishing around the inlets of Tampa Bay with fresh-cut chunks of mackerel is luring many blacktip sharks to the hook. Most catches are 4-6 feet, with more catches on the larger end of the spectrum. For some great catch-and-release action, these fish are one of the best adversaries. The larger sharks usually give up within 20 minutes, which is just enough time to wear out your arms. With long drag-screaming runs and a few leaps to round out the experience, these sharks, pound-for-pound are entertainment on the hook.

Capt. Aaron Lowman is working the nearshore structure with good results. Using live shrimp as bait is attracting a number of species to the hook. Hogfish, juvenile grouper, mangrove snapper and porgies are readily taking live shrimp offerings as the bait reaches the bottom.

After gathering enough inventory for a fish fry, Lowman is moving inshore, fishing the waters of Tampa Bay. Around residential docks, live bait fishing with shrimp is resulting in some black drum, flounder, sheepshead and catch-and-release redfish.

Capt. David White of Anna Maria Charters is finding blackfin tuna and amberjack while working structure offshore in the Gulf of Mexico, where some AJs are reaching the 60-pound class.

Moving inshore, live shrimp is the bait of choice to rack up a variety of species, including sheepshead, black drum and some flounder. Also while inshore, White is hooking up his sportfishing clients with catch-and-release redfish and catch-and-release snook.

Capt. Jason Stock is running into some excellent action while targeting kingfish in the offshore waters of the Gulf of Mexico.

Fishing over wrecks, reefs and hard bottom is proving good for this bite. Mixed in are large amberjack and blackfin tuna, which is enough to spoil most anglers who enjoy battling a strong-fighting fish. Bottom fishing is working well for Stock offshore, where mangrove snapper and almaco jacks are cooperating nicely — just nicely enough to make it into the cooler. And, finally, Stock is targeting gag grouper with success around inshore and nearshore structure.

Jim Malfese at the Rod & Reel Pier says he’s seeing decent numbers of black drum being caught. Using live shrimp as bait is a sure-fire way to get hooked up with these frisky bottom feeders. While using shrimp as bait, pier anglers also are hooking into sheepshead and redfish. Malfese says these once abundant schools of bait fish at the pier are thinning out as the water temps drop. The same applies for the predators that feed on them — mackerel and ladyfish.

Casting jigs and spoons from the pier is a viable method to get some action, although determination and patience are virtues. Malfese says the bet is to tip a jig with shrimp and bounce it on the bottom, which could result in a flounder or pompano.

Capt. Warren Girle is finding action with his clients on structure in Tampa Bay. Free-lining live shiners over artificial reefs and wrecks is attracting macks, juvenile gag grouper and mangrove snapper. The bite primarily consists of the mackerel, but when the shiners swim too deep toward the structure, they become opportune targets for the gags and snappers. Moving to the shallower waters of Anna Maria Sound, Girle is putting anglers on catch-and-release spotted seatrout. While targeting the trout, ladyfish and jack crevalle are taking the hook. Lastly, on warmer days, catch-and-release snook fishing is providing action.