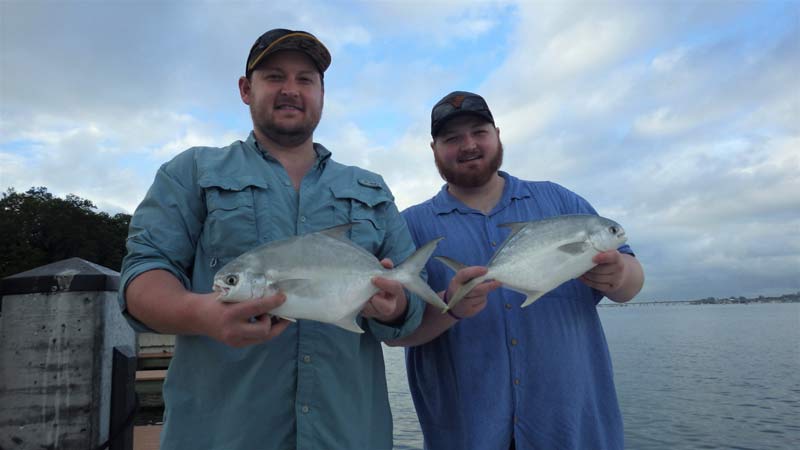 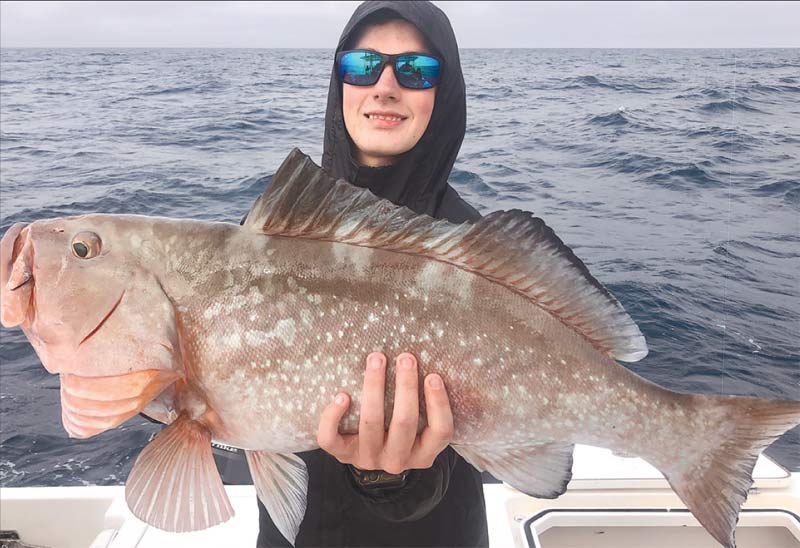 Noah Breuer, 15, visiting Anna Maria Island from Lake of the Ozarks, Missouri, shows off his Dec. 29 catch, a red grouper caught on a dead sardine in the Gulf of Mexico, 25 miles offshore of Holmes Beach, while on a guided fishing trip with Anna Maria Charters. The Gulf waters were a little rough, but the winter fishing trip was rewarding for the family of  Missourians.

The first week of the new year provided the typical wintertime action we’ve come to expect in January around Anna Maria Island — and the trend continues.

Starting with the inshore bite, casting shrimp around residential docks and seawalls is resulting in a variety of species. Black drum, sheepshead, mangrove snapper, flounder and catch-and-release redfish are rounding out the bite.

Fishing the deep inshore flats is producing action — especially on ladyfish, jack crevalle and bluefish. Mixed in the grassy areas are pompano and catch-and-release spotted seatrout.

Moving deeper into the Gulf, the offshore captains are finding plenty to keep clients busy. Bottom fishing is resulting in red grouper, hogfish and a variety of snappers and grunts, while fishing baits toward the surface is luring many migratory fish to the hook. Amberjack — now catch-and-release — are in abundance and anglers also are hooking into kingfish, bonito and blackfin tuna.

On my Southernaire charters, I’m fishing along the beaches, which is resulting in pompano and numerous ladyfish and bonnethead sharks.

Lastly, fishing around docks and canals is providing action on some typical winter targets, black drum, sheepshead and catch-and-release redfish.

Capt. Aaron Lowman is working over rocks and along the shoreline docks on the windier days. Casting live shrimp in these areas is yielding sheepshead, mangrove snapper and some catch-and-release redfish.

Fishing the inlets and passes also is providing action for Lowman’s clients.

Deep grass areas in close vicinity to passes are producing pompano and catch-and-release trout. To target these fish, Lowman is rigging pompano jigs tipped with shrimp.

White’s clients are hooking into the blackfin tuna action with free-lined baits on the surface.

Moving inshore, sheepshead and black drum are providing action for anglers looking to take something home for dinner. Other action while inshore fishing with White is coming from catch-and-release snook and redfish.

Capt. Jason Stock is finding great catch-and-release action on amberjack while fishing wrecks and hard bottom in the Gulf. AJs up to 100 pounds are being caught by free-lining live baits and artificials, such as surface poppers. Other migratory species taking the hook include kingfish, bonito and blackfin tuna.

Bottom fishing over ledges and hard bottom is a good bet on a Stock charter. Catches being reeled up include hogfish, red grouper and mangrove snapper.

Jim Malfese at the Rod & Reel Pier is seeing a variety of fish reeled up by anglers visiting the pier. Catches occurring on live shrimp include sheepshead, black drum and catch-and-release redfish. Anglers casting jigs from the pier are finding action on Spanish mackerel and jack crevalle in the 6-pound range.

Lastly, a few catch-and-release snook are being hooked by patient anglers who are soaking large baits under the pier deck.

Capt. Warren Girle is finding a variety of species to take the hook on shrimp-tipped jigs cast over deep grass flats. By placing a small piece of fresh-cut shrimp on the hook of a jig and then drifting and casting to cover a lot of water, Girle is leading his clients to bluefish, macks, jack crevalle, ladyfish and numerous catch-and-release spotted seatrout. The bite is consistent, providing great action on light spinning tackle.

Fishing artificial reefs in the Gulf also is producing a bite. While bottom fishing with live shrimp, Girle’s anglers are consistently hooking up on sheepshead, mangrove snapper, Key West grunts and juvenile grouper.