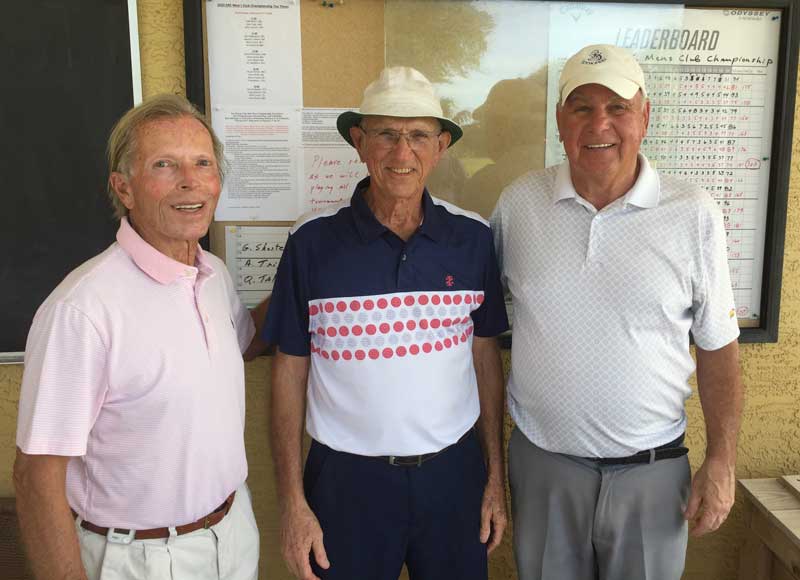 Members of the Key Royale Club in Holmes Beach competed in the 2020 Club Championship Feb. 12 with Gary Risner earning the crown on a two-day tournament score of 4-over-par 132.

Nineteen players participated in the 36-hole, no-handicap stroke-play challenge that was played over two days. Greg Shorten took second place with a 150, while John Kolojeski came in a stroke behind Shorten in third place.

Center sports on the big field

The chase for perfection has ended for the three age divisions of the youth flag football league at the Center of Anna Maria Island in Anna Maria.

HSH Designs in the 8-10 division and MuniPlan in the 14-17 division all posted losses in the past week, tightening the standings at the top.

HSH Designs is in a tie for first place in the 8-10 division with Moss Builders, while Diamond Turf and Beach Bums are closing in with matching 3-2 records. Cool Today holds down fifth place with a 2-3 record, just ahead of 2-4 Rays Ramblings and 0-5 Swordfish Grill.

The 11-13 division is still led by Progressive Cabinetry with a 5-1 season, a game ahead of 4-2 Solid Rock Construction. Slim’s Place holds down third with a 3-3 record, while Ugly Grouper at 0-6 is still in search of a victory.

MuniPlan and Hashmark Sports are tied for first place in the 14-17 division with Killer Bait on their heels with a 3-2 record. Ugly Grouper at 1-4 and 0-4 Gulf Drive Cafe complete the standings for the 14-17 players.

Action in the 8-10 division kicked off Feb. 11 with Rays Ramlings rolling to a 38-2 victory over Cool Today behind Reef Marin and Drew Buky, who both ran for two touchdowns. The second match saw Diamond Turf cruise to a 38-6 victory over Swordfish Grill behind two touchdown passes, a rushing TD and two receiving TDs from Maddox Culhane and three touchdown passes from Carson Clover.

The final 8-10 division matchup Feb. 11 was the game of the week. Beach Bums pulled off an upset on previously unbeaten HSH Designs behind a big game from quarterback Carter Eurice. Eurice threw for a pair of TDs, while also chipping in with two, 2-point conversions. Dennis Gallagher and Hayden Eurice both had touchdown catches, while Jonathan French completed the scoring with an interception return for a TD.

HSH Designs was led by Connor Samblis, who ran for a touchdown and connected with Savanna Coba for another touchdown.

Victor Albrecht’s touchdown pass to Evan Talucci and an extra point from Carter Cantrell completed the scoring for Solid Rock Construction in the loss.

Slim’s Place evened its record at 3-3 with a 20-18 victory over Ugly Grouper thanks to a pair of rushing TDs by JM Feeney and a touchdown pass from Nick Yatros to Jack Whiteside.

Kolby Petrin scored the lone touchdown for Ugly Grouper on a pick six.

The final game of the evening saw the 14-17’s Killer Bait edge MuniPlan 27-26, giving MuniPlan its first loss of the season. Ben Barreda threw four touchdown passes, including three to Cole Carter to lead Killer Bait, which also received a TD catch from Jackson Hayes in the victory.

Tuna McCracken led MuniPlan with four touchdown passes, including two to Tyler Brewer and one each to Blake Balais and Morgan Horesh in the loss.

The action continues Tuesday, Feb. 18, with a full slate of games on tap.

After three weeks of action, Moss Builders is on top of the standings in the adult flag football league at the center with a 3-0 record.

Lancaster Designs, Slim’s Place and Beach Bums follow with 2-1 records, while Firkins Automotive, Capt. Sky Cruises and Rays Ramblings hold down fifth on 1-2 records. Ugly Grouper is in last on an 0-3 record.

There were three fairly competitive games during the leagues Feb. 12 schedule. Rays Ramblings cruised past Lancaster Designs by a 34-21 margin, while Moss Builders outscored Capt. Sky Cruises 42-19 but, the game of the week was the opener that saw Slim’s Place hold on for a 44-40 victory over Ugly Grouper.

Tim Shaughnessy threw for five touchdown passes, including two each to Caleb Roberts and Matteo Ferris. Karri Stephens added a touchdown catch to go along with a rushing TD. Roberts also chipped in with a pick six and an extra point in the victory.

The team of Tom Farrington and Jay Disbrow drew the bye and watched as Tom Skoloda and Tom Anderton cruised past Sam Samuels and John Crawford by a 21-11 score. Skoloda and Anderton stayed hot and defeated

Farrington and Disbrow 26-19 in the finals thanks to a game-ending double-ringer by Skoloda.

Action Feb. 15 also saw three teams in the knockout stage with Rod Bussey and Del Reese getting the bye. Gary Howcroft and John Crawford cruised past Adin Shank and Bob Fleming by a 21-8 score to advance to the finals. In the final, Bussey and Reese defeated Howcroft and Crawford 21-12.