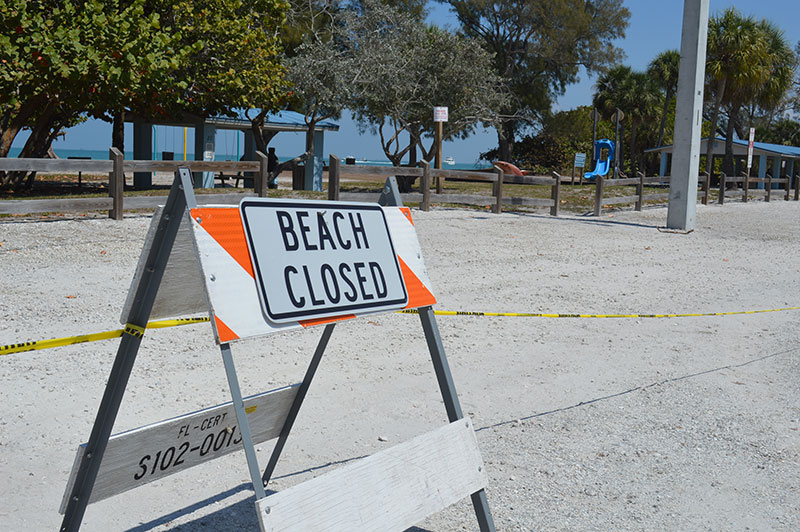 A “Beaches closed” sign is posted March 20 at Bayfront Park in Anna Maria as a preventative measure to mitigate the spread of COVID-19. Islander Photo: ChrisAnn Allen 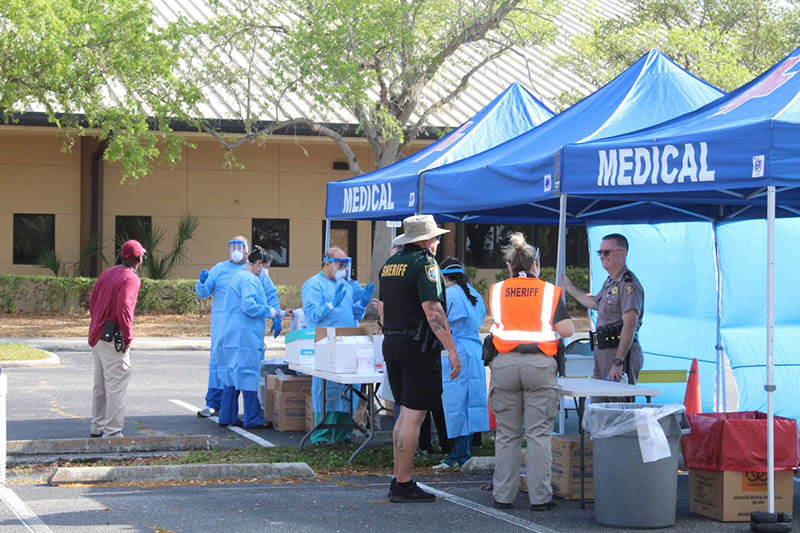 All three cities on Anna Maria Island, as well as Manatee County, extended emergency declarations the week of March 23 to enact additional powers to mitigate the spread of COVID-19, including the closure of boat ramps in the county.

Emergency declarations also will allow the municipalities to recover costs down the road.

Meanwhile, confirmed cases of the new coronavirus in Florida continued to mount. There were 4,950 confirmed cases as of March 30, up from 1,007 March 23 and 136 the week before.

The number includes 38 cases in Manatee County, where 11 people had been hospitalized for the virus and one person had died as of March 30.

The virus, which first appeared in late 2019 in Wuhan, China, is spread person to person. Public health guidelines urge people to stay at home, practice social distancing and observe government orders — at all levels — including closures or restricted operations.

Anna Maria Mayor Dan Murphy said the pandemic has hit here economically harder than any other county in the United States, with business down 28%.

He said also that the county’s suicide rate had tripled due to the trying times.

After ordering public access to the beaches closed the previous week, Manatee County issued another order March 26 to restrict access at Beer Can/Greer Island at the north tip of Longboat Key and close county- and city-owned boat ramps to prevent public gatherings.

The order allows commercial fishers — monitored by county personnel — to operate out of the Coquina South Boat Ramp in Bradenton Beach. Fishers must have a saltwater product license, which is issued by the state Department of Agriculture to qualify as a commercial operation.

The county also opened a drive-through site March 26-29 at the Bradenton Area Convention Center, 1 Haben Blvd., Palmetto, to test people for the coronavirus. A doctor’s prescription, identification card and an appointment were required for testing.

On the municipal level, all three island cities implemented measures against the virus, including closing city buildings to the public, holding virtual meetings and canceling nonessential meetings.

Anna Maria and Holmes Beach held their first meetings via teleconference the week of March 23. Bradenton Beach planned to hold a telemeeting March 31.

At their March 26 meeting, Anna Maria city commissioners voted unanimously to extend the city’s state of emergency for another seven days, as well as authorized the mayor to extend the deadline every seven days as needed so a meeting wouldn’t be required.

“We don’t know when this is going to end,” Commissioner Mark Short said. “We’re all optimistic it will be sooner versus later, but I think having the ability to continue to renew this on seven-day increments will allow for appropriate timing.”

Bradenton Beach Police Lt. John Cosby said March 24 that the safety measures implemented by the city and county had been successful.

“It’s going very well here, considering some of the problems other areas are having,” Cosby said. “Hopefully that will keep going, but our residents and all of our businesses have been compliant.”

“No issues at all, I’m very happy to say,” he added. “Hopefully this will plateau, and this will move in a better direction.”

He said if Gov. Ron DeSantis issued a stay at home order, the idea would be revisited.

Bradenton Beach city attorney Ricinda Perry proposed taking advantage of downtime for some by moving forward with two Bridge Street improvement projects that had been put on hold until Easter to avoid impacting the spring tourist season.

Perry said she would work with city staff on a plan to move ahead with the pervious brick paver and underground utility projects that she would present at the community redevelopment agency meeting at 9:30 a.m. Wednesday, April 8.

In Holmes Beach, Titsworth sent an official request to all vacation rental addresses, hotels and motels urging them to stop taking new reservations of less than 30 days until further notice.

Titsworth added that city staff has “received a positive response to this request” and “occupancy continues to decline but given the concerns of residents we will continue to daily monitor.”

In Anna Maria March 24, Murphy ordered that vacation rental properties not take new reservations of less than 30 days March 26-June 30, at which point shorter stays might be allowed.

Under the order, if a vacationing renter cancels before the end of a 30-day period, the property cannot be rented again until the 30-day period expires.

Rose Jordan from Pennsylvania called into the March 26 meeting to ask if the city’s order impacted her family’s vacation reservations for April.

Murphy said the order did not apply to reservations made before March 26.

However, he said, “This is not a good time to be here. It probably wouldn’t be a good time for me to go to Pennsylvania, either.”

Murphy also addressed beach closures, as vacationing renters had expressed confusion with signage reading “Residents only past this point” at some beach access points.

The mayor, in a March 25 email to The Islander, said vacationing renters are considered “part-time residents” by the city and can access the closed beaches because “they are residing in our city.”

Murphy gave Jordan and other vacationers his contact information so they could reach him for help.

“The recent actions and declaration of the Mayor have gone beyond the authority granted to him under the City of Anna Maria’s Land Development Code and most importantly Florida Statutes,” Najmy wrote. “Assuming the Mayor has this authority, the Mayor does not have the absolute authority to enforce his will via these emergency measures for any period of time he deems appropriate.”

Najmy said only the governor has the authority to make such an order. He said if the order was within Murphy’s authority to issue, it should only be effective for the duration of the city’s state of emergency, which can only last seven days after declaration and following extensions.

“Should the City take action pursuant to Order #2 as currently written, we feel strongly that any violation on this point would be successfully defended against by any of the affected citizens,” Najmy wrote.

However, DeSantis issued an executive order the next day to prohibit vacation rentals from making new reservations or checking-in new guests for 14 days beginning March 27.

Guests who were occupying a vacation rental unit when the order passed, or checked in by March 28, are allowed to fulfill their reservations.

The state order does not pertain to non-transient lodging establishments such as long-term rentals, inns, timeshares, hotels and motels.

Murphy amended Anna Maria’s order the same day to adopt DeSantis’ order, implementing the governor’s 14-day timeline for the earlier deadline that was set by the city.