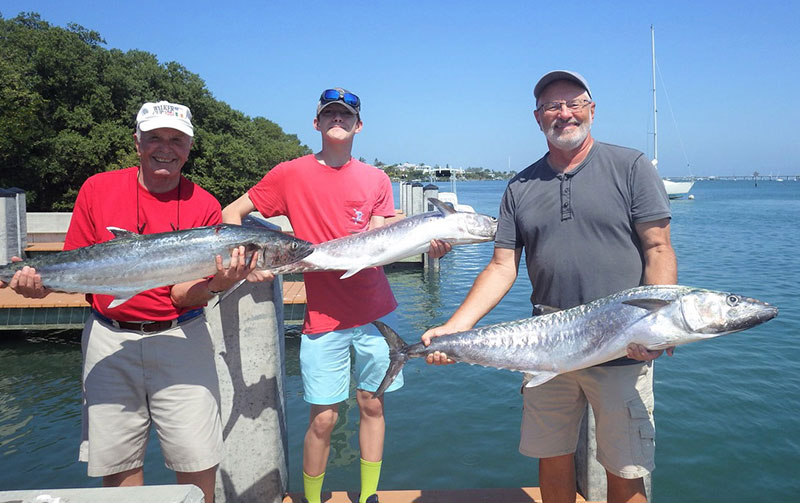 Jim Suddreth, left, Devon Suddreth and Ron Doerr, all from Longboat Key, fished March 25 with Capt. Warren Girle offshore in the Gulf of Mexico. They used shiners to catch several kingfish that were destined for the home smoker.

Some of the best fishing opportunities of the year are occurring around Anna Maria Island — as they do every year in late March.

Offshore fishers are catching a wide variety of species — from pelagics to reef fish.

And, to top it off, the weather is cooperating. There’s hardly any wind, which makes for smooth travel to the more distant fishing destinations.

Offshore catches include a bounty of kingfish, blackfin tuna and amberjack on the pelagic side and, on the bottom, are assorted snappers — mangrove, yellowtail and lane — as well as red grouper.

Lucky anglers are hooking into some permit and a few African pompano — both worthy adversaries for even the most experienced angler — around the offshore wrecks.

Inshore fishing is following suit. Catch-and-release fishing for the top tier trio of snook, redfish and trout is heating up — put the emphasis on snook and trout. Free-lined live shiners are attracting the most action for the snook. They’re working for the trout, too. And don’t fret if you can’t get bait. Soft plastics on a jig head are working just as well — anything on a hook with a curly tail is attracting attention.

Fishing slightly deeper inshore structure, such as the artificial reefs in Tampa Bay and the Gulf of Mexico, is producing migratory fish — kingfish, Spanish mackerel and cobia. And with a lot of the shiners running medium to large right now, targeting kingfish is a good bet.

Capt. Warren Girle is finding excellent action at nearshore and offshore structure, where he reports free-lining live shiners is resulting in numerous king mackerel up to 30 pounds. Large Spanish mackerel are present in the same areas as the kings, and they are measuring 25-28 inches.

Moving inshore, Girle is using live shrimp as bait to work the bite in the residential canals. In these areas, a mix of black drum and catch-and-release redfish are being caught, with the black drum the most prominent. Girle says anglers are hooking up drum 24 inches.

Lastly, fishing the deeper grass flats around the Intracoastal Waterway is resulting in many spotted seatrout as well as jack crevalle and ladyfish. Girle reports the bite is best when using soft plastics on a jig head as bait.

Capt. Aaron Lowman is finding a great catch-and-release bite while working the shallow grass flats of southern Tampa Bay. Casting live shiners along mangrove shorelines and around oyster bars is resulting in slews of catch-and-release snook, redfish and big spotted seatrout. Being present in the right spot during the right stage of the tide is key to the hookup of all three of these species, according to Lowman.

Moving away from the flats and into the Gulf of Mexico, Lowman is finding action around the nearshore artificial reefs, where mangrove snapper, porgies and sheepshead are being caught on live shrimp. Using live shiners as bait also is producing action, especially for Spanish mackerel and kingfish.

Capt. Jason Stock says the offshore permit fishing is outstanding. Many fish are being caught, ranging 10-35 pounds. He says live free-lined crabs are key when targeting these fish.

Another productive bite in deep water for Stock is blackfin tuna. These fish are being caught by freelining live baits or slow-trolling plugs around offshore wrecks. As a bonus, amberjack are present in these areas and are responding to surface poppers and live bait offerings. Stock says bottom fishing for snapper is heating up and both mangrove and yellowtails are biting. Lastly, some exotic fish, including African pompano, are occasionally taking a hook.

Capt. David White says the offshore fishing is “simply going crazy” right now. Targeting red grouper within the 120-foot depth range is resulting in limits of these fish. Yellowtail snapper are being caught in depths of 60 feet over hard bottom. Amberjack seem to be the most abundant.

In fact, White is finding it challenging to get away from the AJs when he’s aiming for other species, including African pompano in the 40-pound class. The highlight offshore this past week for White was seeing a great white shark — it circled the boat three times — while working with clients 40 miles offshore.

Moving inshore, White doesn’t have the thrill of a great white shark, but he is seeing plenty of catch-and release snook and redfish. Sportfishers casting live shiners over shallow grass flats are luring both species to the hook.

Working the deeper waters of Tampa Bay around wrecks and reefs is providing action on both Spanish mackerel and mangrove snapper for the customers’ coolers.